For the last three days, I have been spending my days at C4 - Central Canada Comic Con 2012. It was - as usual - an amazing experience with beautiful people, intricate costumes, and great displays and exhibitions.

I got up early in the morning to get my costume ready - Robes, ears, a headdress, six inch heels, my dress, tights, makeup... I decided to do my makeup and ears before I left the house, and to bring the rest of my costume with me on the bus. Luckily I had my amazing mother to accompany me, and she helped me carry my stuff when I was in costume later in the day.

After going through the same process as Friday in order to get my mother into the convention (with the additional steps of getting into costume and posing with people for pictures), we got in line for Nichelle Nichols' Q&A. The Q&A was absolutely amazing, and she ended up singing for us at the end. I got her singing on video and took pictures, which I will be posting later.

After that I got professional photos taken with Marina Sirtis and Sir Patrick Stewart (separately) and walked around the convention, having my photo taken and talking to people. One person came up to me and asked what Legend Of Zelda character I was.

A friend of mine dresses as a Klingon every year, and volunteers at the Con. We happened to both be dressed up at the same time for once, and I got a photo: 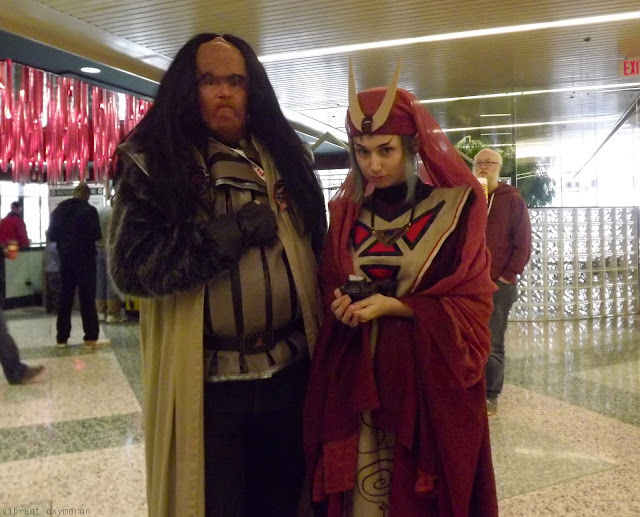 I also came across this wonderful young lady who came as the Borg Queen, and she agreed to have her picture taken with me. I neglected to ask her for her name, but she was wonderful: 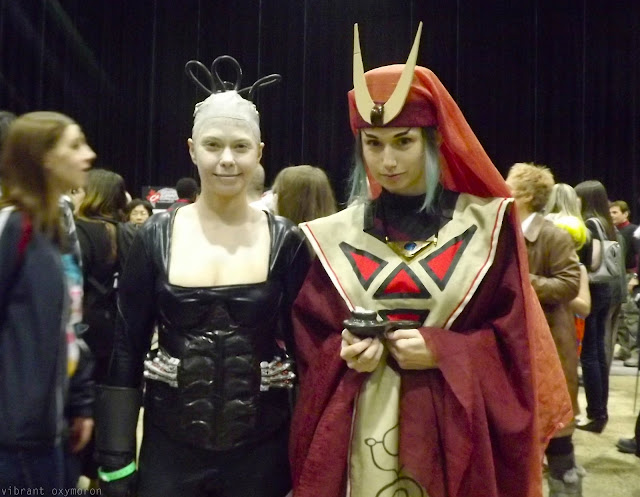 Finally it was time for the Q&A session with Sir Patrick Stewart which I had gotten passes for the day before. He was absolutely amazing - intelligent, down to earth, and hilarious. I also got my photo taken with him professionally. I will be posting photos from the photo-op and Q&A in a later post.

Here is a photo of me waiting patiently in the conference room for Patrick Stewart to come on stage. Whenever I sat down, the layers of my costume separated and had to be reset: 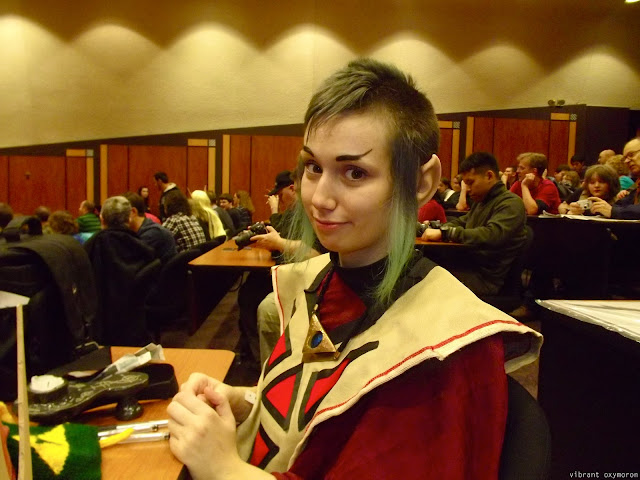 On the way back upstairs, I saw the most amazingly adorable family. The father was the Eleventh Doctor, the mother was Amy Pond, and their three children were dressed as Daleks. One of the little girls was in a stroller, and instead of a Dalek skirt and hat they actually dressed the stroller. 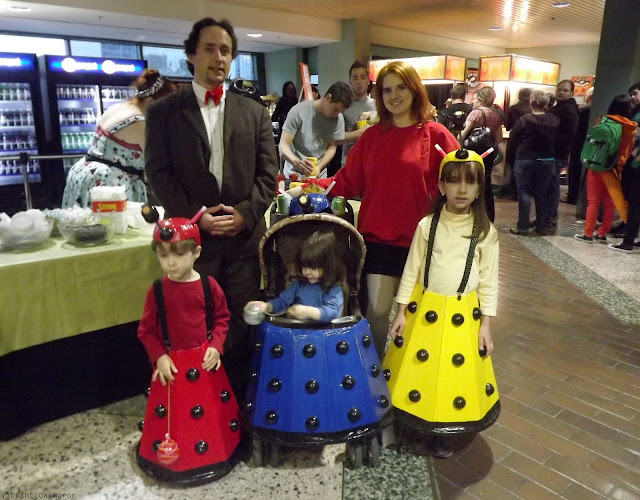 Here is a closer look at the skirts: 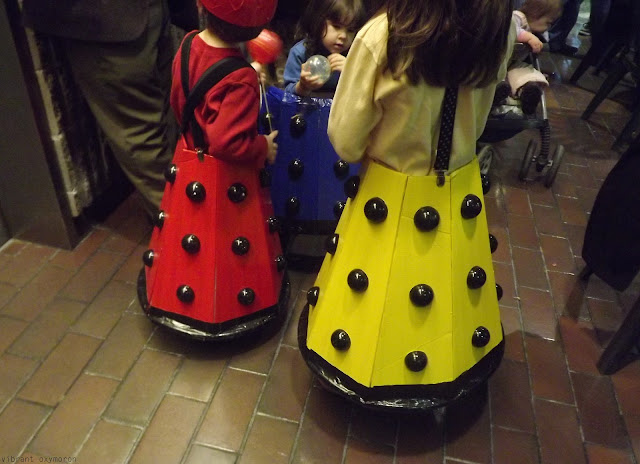 Finally, it was time for the costume contest. After being in six inch heels for ten hours already, my feet were so sore that I never wanted to stand or walk again. Unfortunately, I had to stand in line for another few hours.

I had never entered any kind of costume contest before - I had worn a Vulcan Priestess costume before, but after fixing it up and adding embellishments (Ozhika in traditional vulcan script, red lined with black instead of plain holes in the chest, ribboned edges, etc.) I decided that this would be the year - I even brought along my hand-sculpted Vulcan meditation lamp. I entered Miss C4, which was a great experience, and the Sci-fi/Movies/Fantasy category  which I won. I honestly did not expect to win at all - when they called second place, I though I knew for sure that I would not win because her costume was so much better than mine, and so were others! As my prize, I received a trophy and 75 dollars in gift certificates for comic and costume stores.

I met a husband and wife who were dressed as a Klingon and Borg. Her husband had made her bat'leth with materials like aluminum foil and either duct or electrical tape (I can't remember which). He also had a mouth piece which made everything he said sound like it was actually being said by a borg drone. Their costumes were both amazing, and they were really nice people: 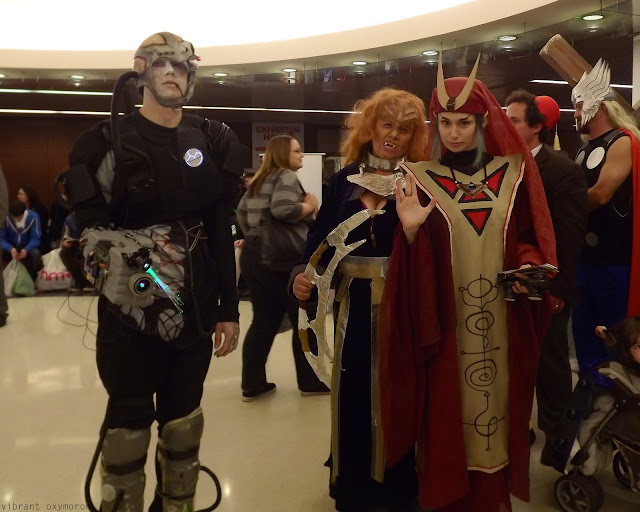 Oh, and remember I said there was a second place winner who I thought had a better costume than me?   Here we are after the contest (she is dressed as the Diva Plavalaguna from The Fifth Element, one of my favorite movies): 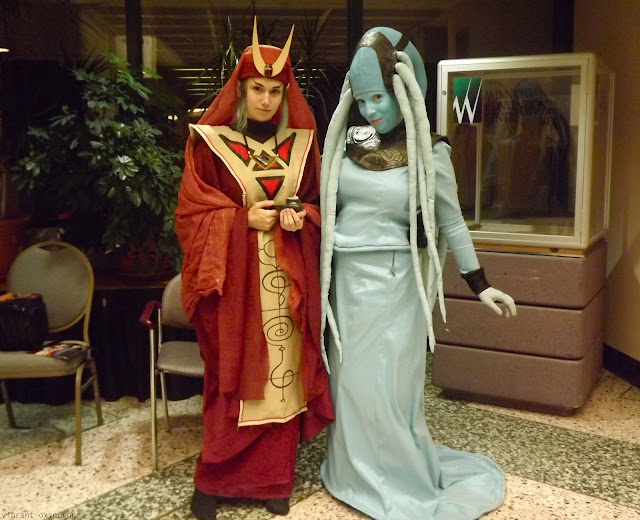 I also had my picture taken with the Best of Show Costume winner - by far the most impressive costume I had seen all day. I forget what character she was, if it was a character, but I do know that it was from World of Warcraft. 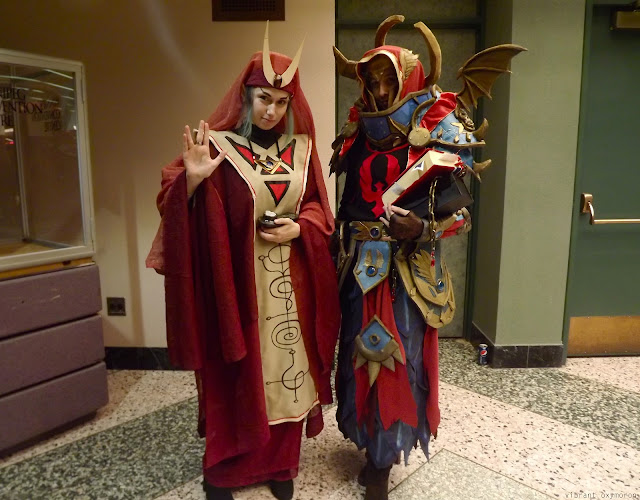 Finally, after more photos and waiting, I got to take off my hot costume and painful heels. Unfortunately, I forgot to bring anther pair of footwear so I had to put my heels back on to go home. I was so exhausted by that time that I kept falling asleep on the bus. It took an hour to get home on the bus, and so my mother and I were playing games on our phones and taking pictures. 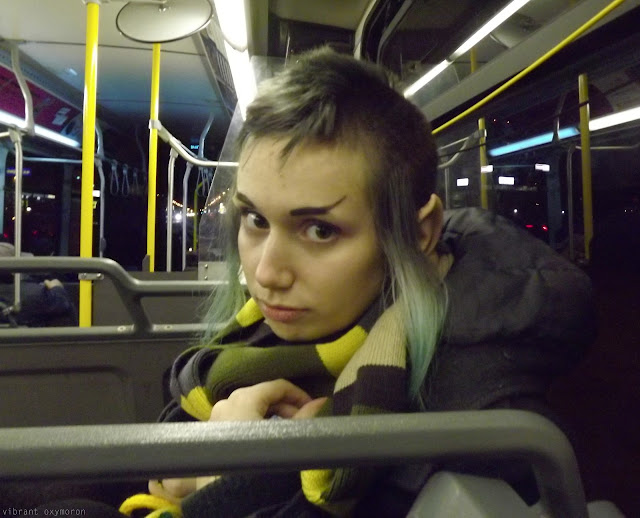 I spent the rest of the night watching Canada's Worst Driver and taking photos of myself in my costume (because this was probably the last time I will ever wear it... probably) before collapsing into bed. 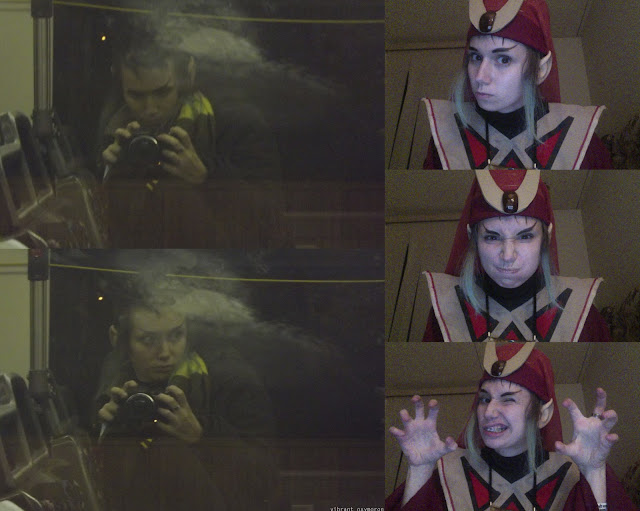 In this photo you can see the bulletin board in my room, and I am holding the trophy I received for my costume: 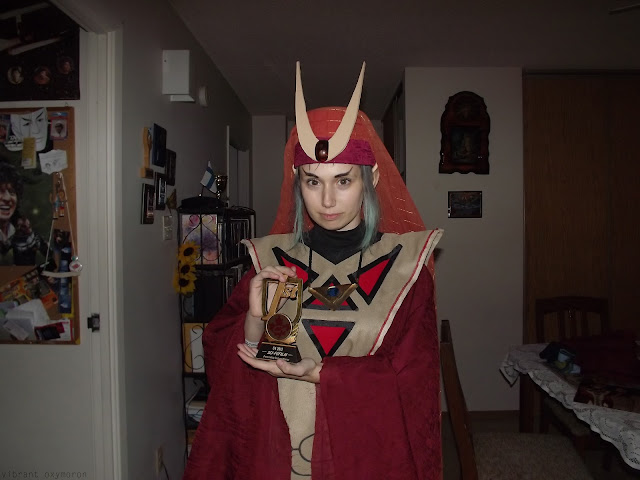 I woke up today (Sunday), ready for the last day of Comic Con. I had to do a couple of things today - first the Marina Sirtis Q&A session (which was amazing and, once again, will be posted about with photos in a later post), and then a photo-op with Nichelle Nichols. I was supposed to have had my photo taken with her yesterday, but I was (along with hundreds of other people) kept downstairs because the main exhibition room was filled to capacity. Because of this, I missed her completely and they asked her to come in today. She is absolutely adorable, and I am so glad the photo-op ended up working out.

I didn't wear a costume today, just a sweater, jeans, and chucks (along with my new Tom Baker scarf). I also re-bleached my eyebrows this morning because the marker I used for my Vulcan brows dyed parts of them brown. I spent most of the day in the conference hall: 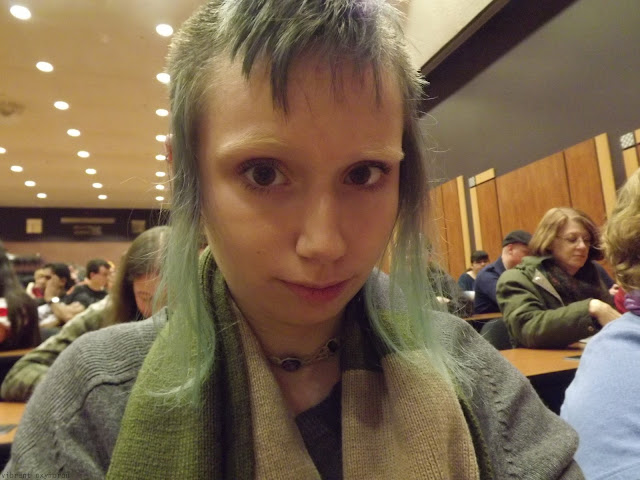 I had some extra time after the photos and Q&A, so I decided to walk around one last time to look over the merchandise. I'm glad I did, because I just so happened to find an Ambassador Sarek action figure: 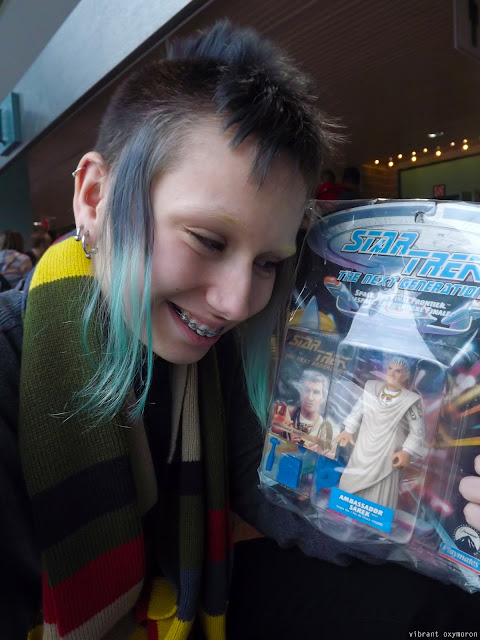 I also ended up purchasing an Andorian action figure (wearing a fuzzy pink jacket for some reason), a small Spock in the environmental suit from The Tholian Web, the Star Trek Chronology, Star Trek TNG SkyBox Episode Collection Cards Seasons three and seven (the full sets), and the 200th issue of Starlog. 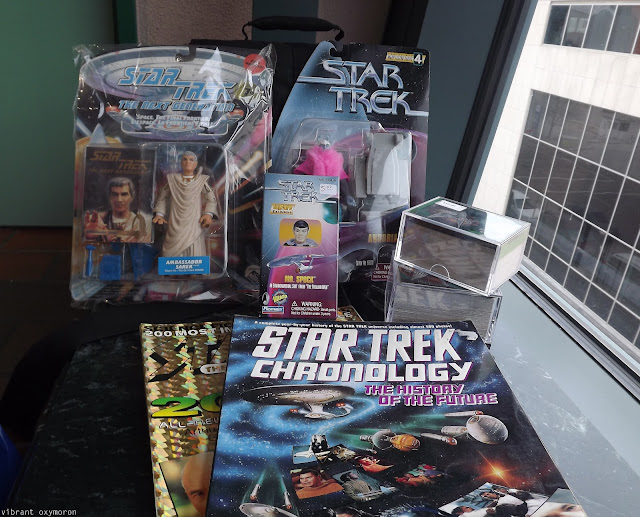 All in all, this year's Central Canada Comic Con was absolutely amazing. It was not organized very well, but that is a difficult job - I don't blame anybody for that. Everything worked out (for most people), I met some amazing people (and some of my heros), I entered my first costume contest, and I have added some amazing items to my collection.

If you have never attended a convention, I would highly recommend that you consider involving yourself in and upcoming con in your area. They can be a lot of work and running around, but I feel that it is all worth it in the end.