Playmates The Keeper from Talos IV and Bele from Cheron

While rummaging through the boxes at Comic Con in October, I found two more Playmates Figures (Aside from Spock ad Pike, shown here). I took some photos so that you, the readers, may see the wonderful details.

One of my favorite characters (I have many) has always been The Keeper from Talos IV, a Talosian as seen in the first pilot episode "The Cage". Because of this, I was extremely excited when I found a Playmates Serialized Warp Factor Series 5 Talosian from 1998. It is obvious that this is The Keeper, due to the pendant worn around the neck. It also came with a Talosian viewer (alien menagerie monitor) and a classic action base.

Also, check out those matching underwear and muscular legs. I never knew. 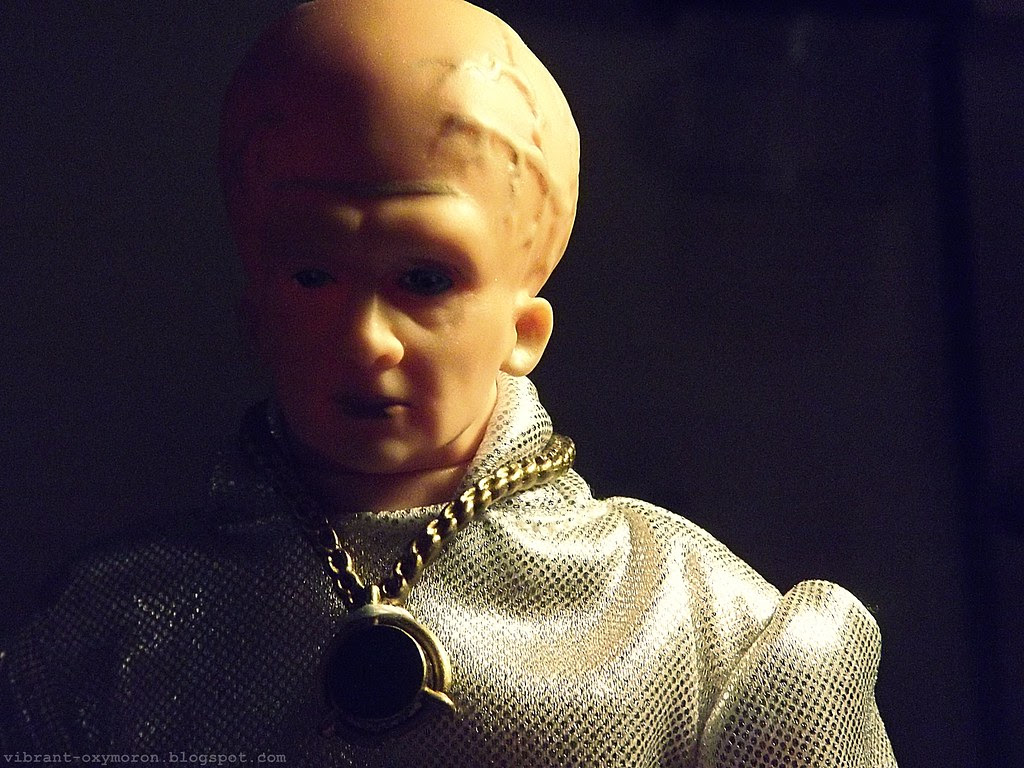 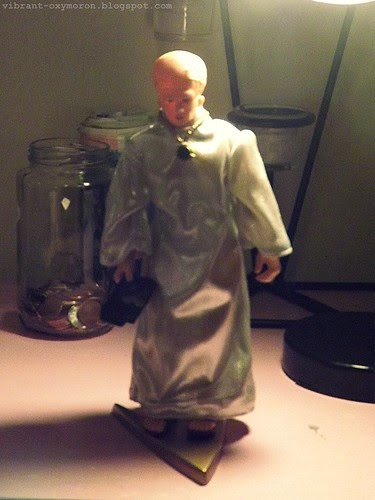 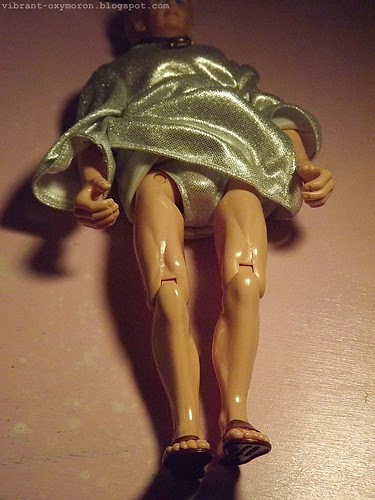 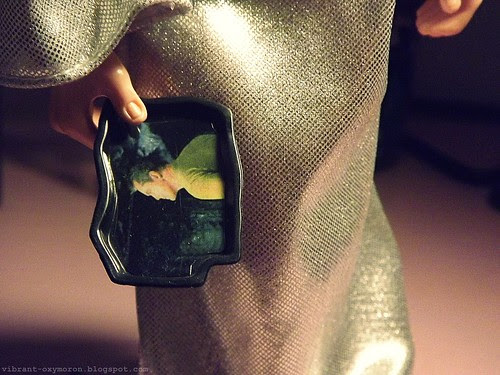 The fourth and last figure I got at that table was Bele from Cheron, as seen in the TOS episode "Let That Be Your Last Battlefield". This figure is part of the same series as the Talosian Keeper - the 1998 Serialized Warp Factor Series 5. The "Galactic Gear" that came with Bele: a Lantern bottle (Ornate beverage container), fluted glass & fluted bottle (glassware appropriate for formal toasts), stemmed glass (Useful for all occasions), acorn top bottle (Container corked to keep the flavor),  and a classic action base. 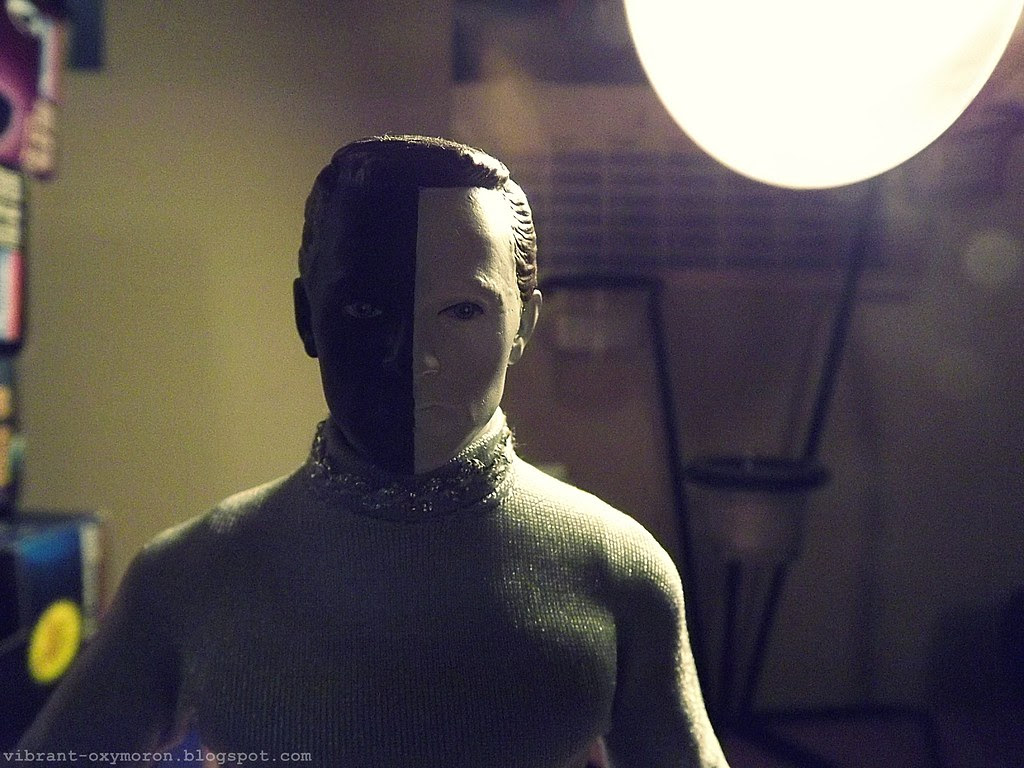 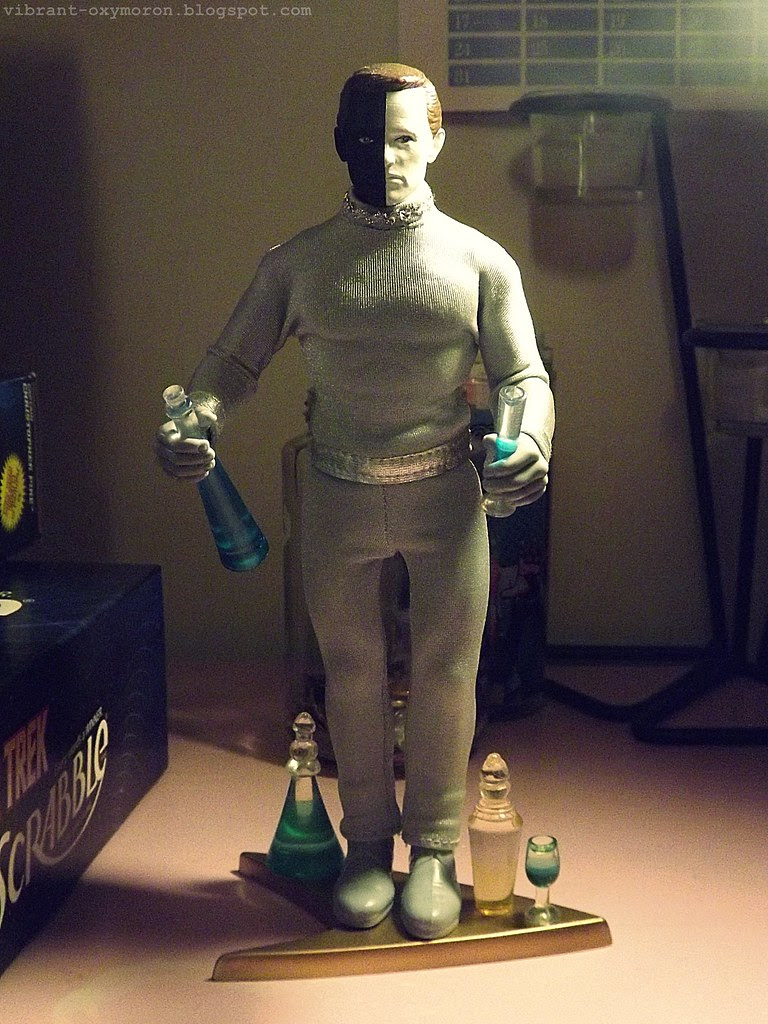 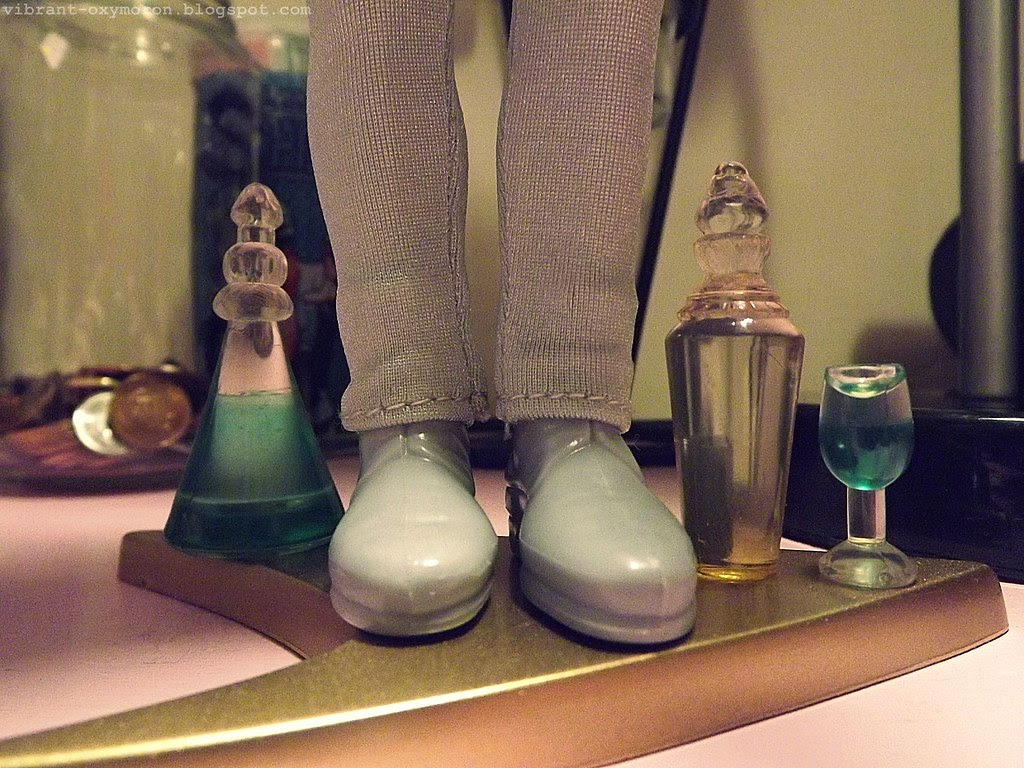 Eventually I would like to get such figures as Sarek, Spock from Unification, and - although I am not sure that one exists - Surak. Until then, I shall sit on the top bunk above my shelves and admire the Playmates figures that I have.
Posted by T'Laina at 18:02 2 comments:

My darling mice, a TARDIS piggy bank, an animated Dalek, a Hallmark Star Trek ornament from "Mirror, Mirror" and... stuff.

While I was at Comic Con, I came across a table that was selling Playmates figures - four for twenty dollars. After running around trying to find an ATM, I was finally able to get the very four that I had wanted. I took pictures of two of them tonight, and will post the other two on the morrow.

The first one I picked was Captain Christopher Pike, from the 1996 Playmates Federation Edition Star Trek Collector Series. The figure also came with a "Starfleet hand laser", communicator, Tricorder, and action base with the Captain's insignia. I took these pictures in the dark with a mere desk lamp for lighting, but I am particularly pleased with how the head shot came out: 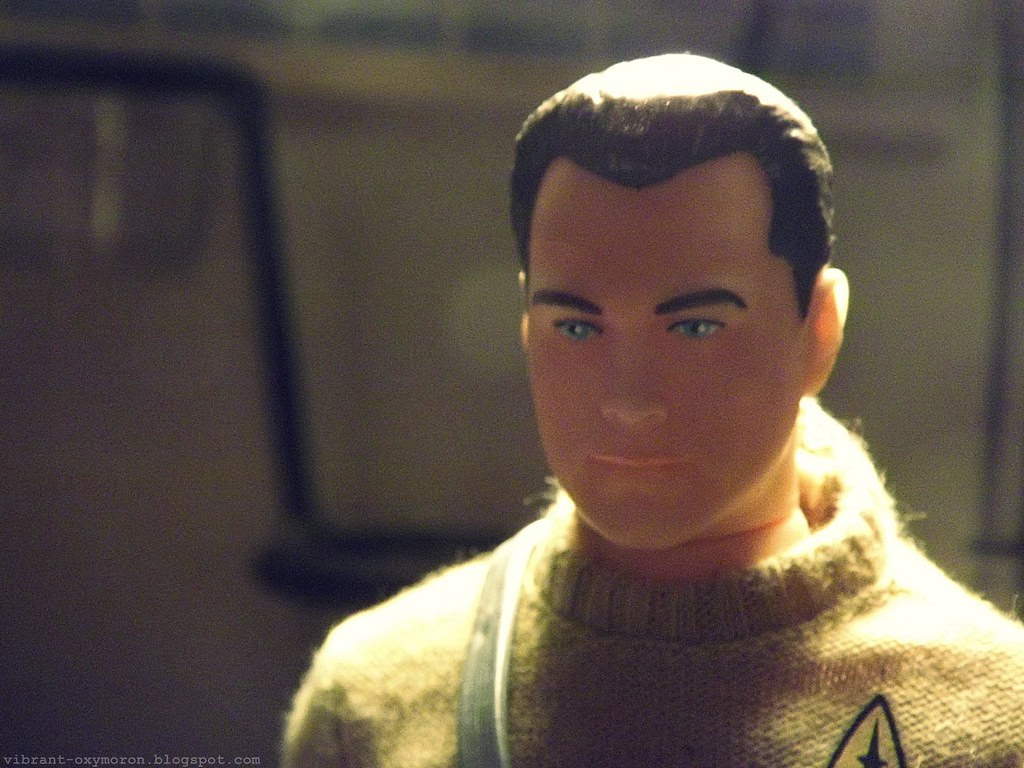 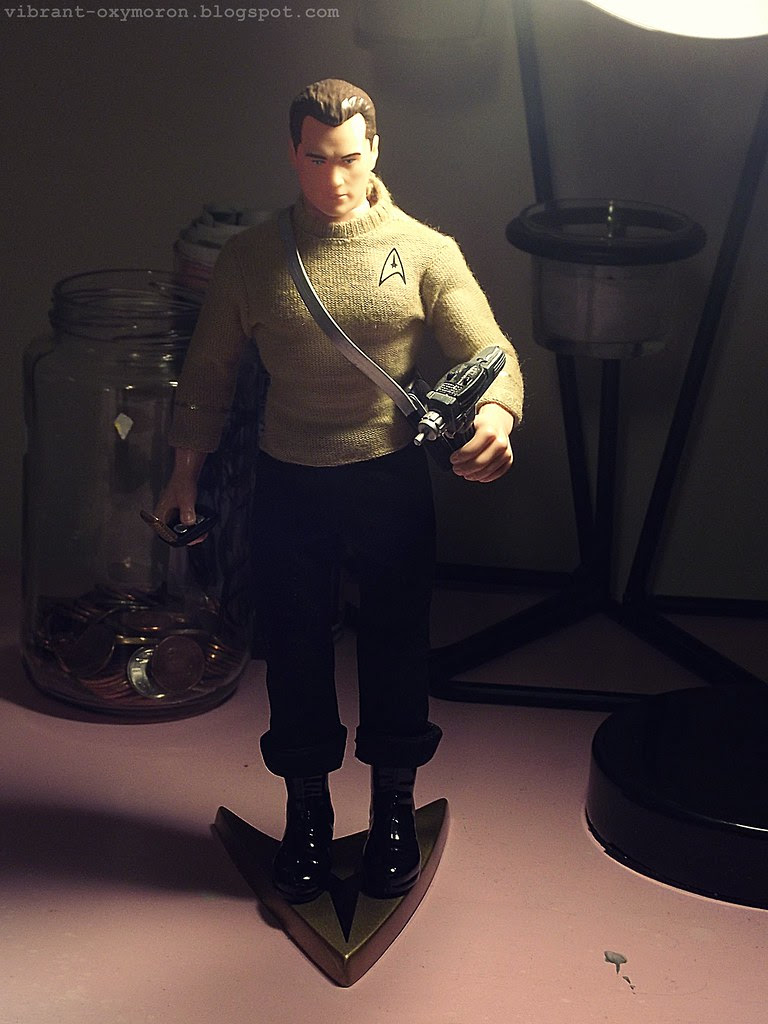 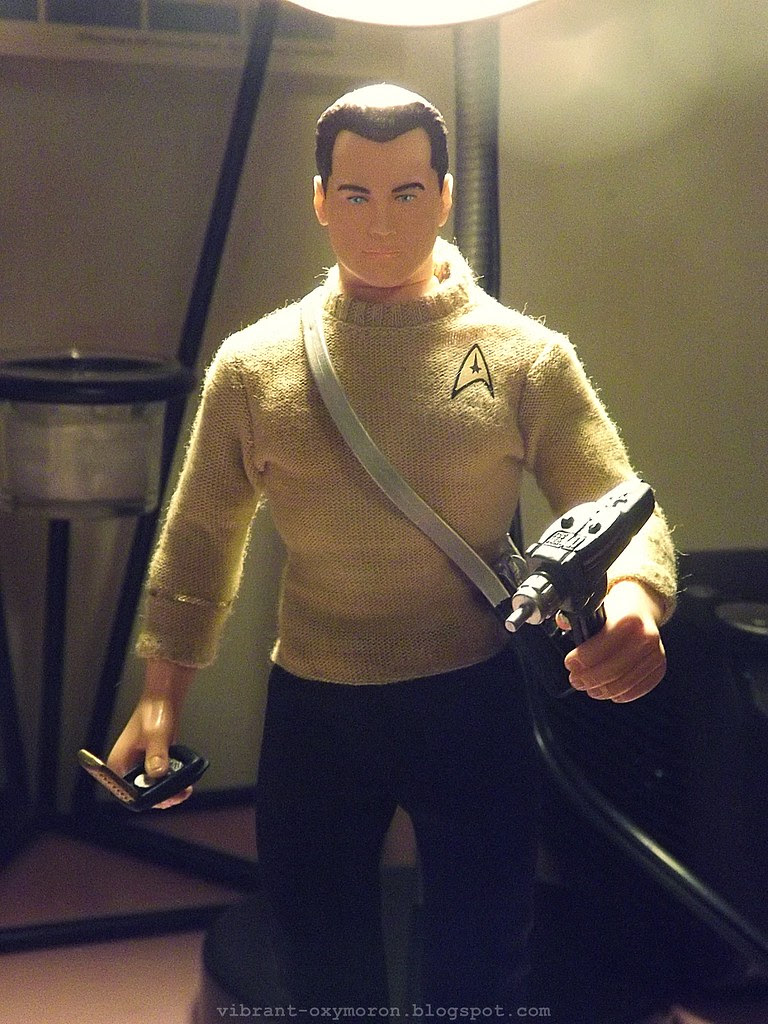 I also got Mr. Spock, which came with "Galactic gear" such as  the Vulcan "harp", lirpa, plomeek soup, and a classic Star Trek action base. Once again, this is a playmates figure - this time from 1999 (exclusive to K.B Toys, limited to 5000).

I have absolutely no idea why the lyre is blue, and he looks quite a bit more like Stonn - but the bowl of plomeek soup makes up for it entirely.


On the back of the box (a bit inaccurate, as Kirk was not technically chosen as a mate): 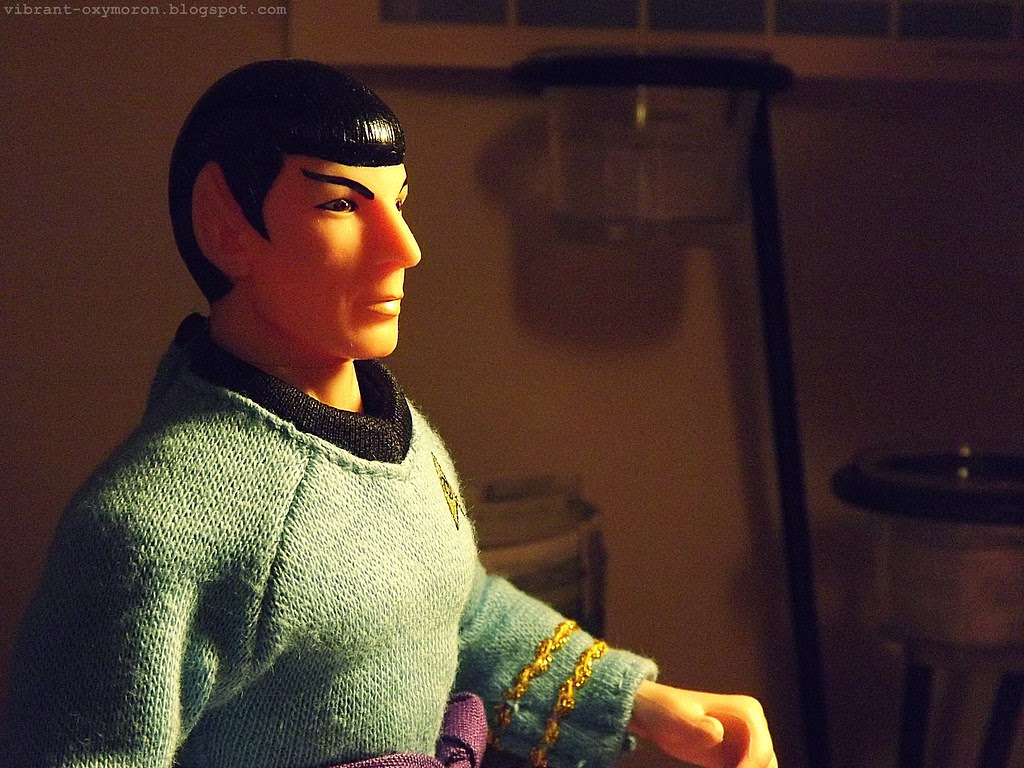 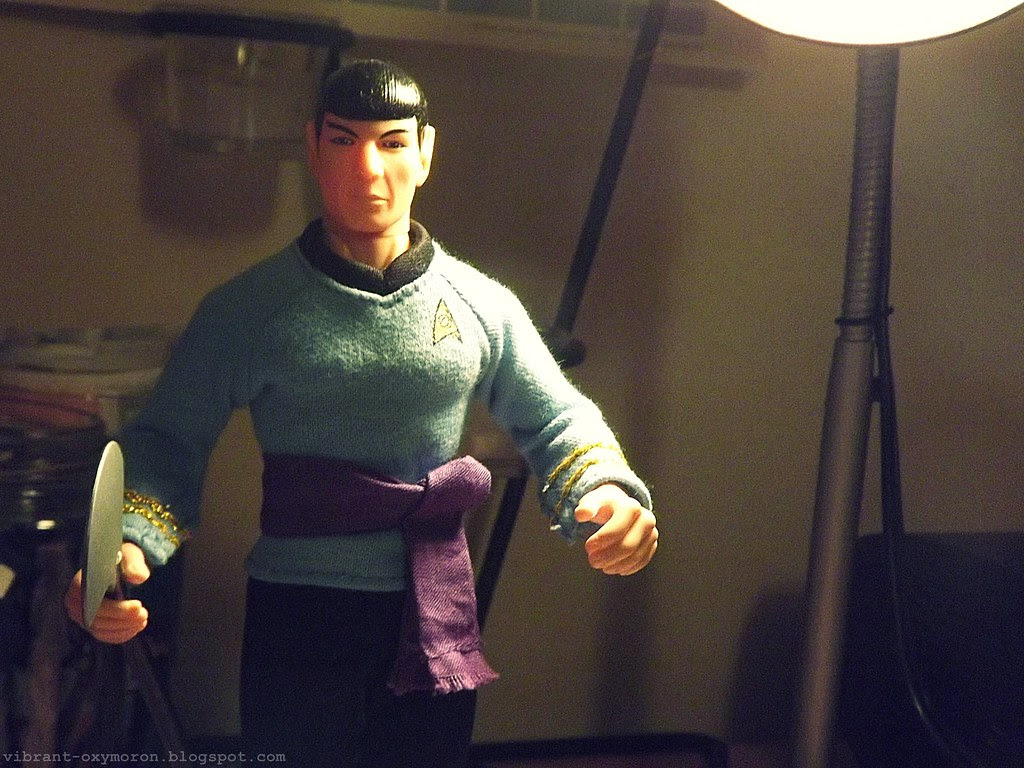 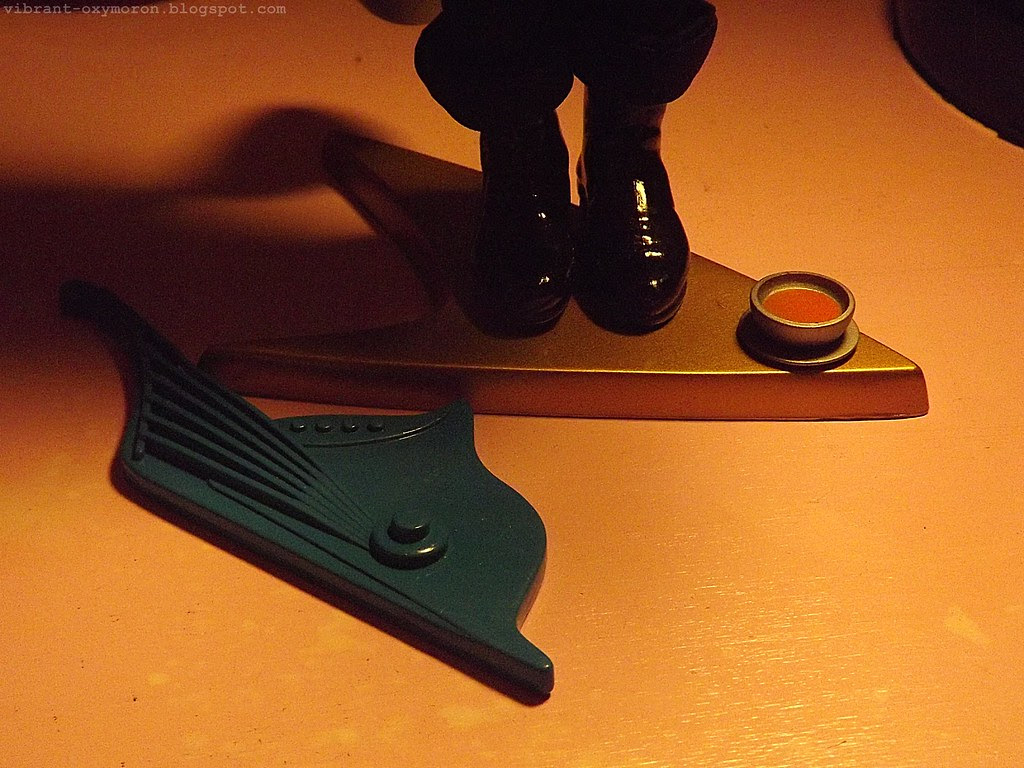 Some of my readers may be exclaiming, all aghast and mentally, "the world is going to end because she took a limited edition Spock figure and a Pike figure out of the box". I don't care. I do not believe that one should keep such things in a box, where it cannot be enjoyed and exists only for monetary value.

Once upon a time I went to Value Village, because a friend told me that they saw some Star Trek mugs in the display case. Value Village is one of my favorite thrift stores, and once in a while they have something absolutely amazing for a very low price. Enthused, I pulled on my rubber boots and ran down the street to take a gander.

When I got there, the mugs' designs were more amazingly designed that I had expected. Unfortunately, there were many chips and scratches. 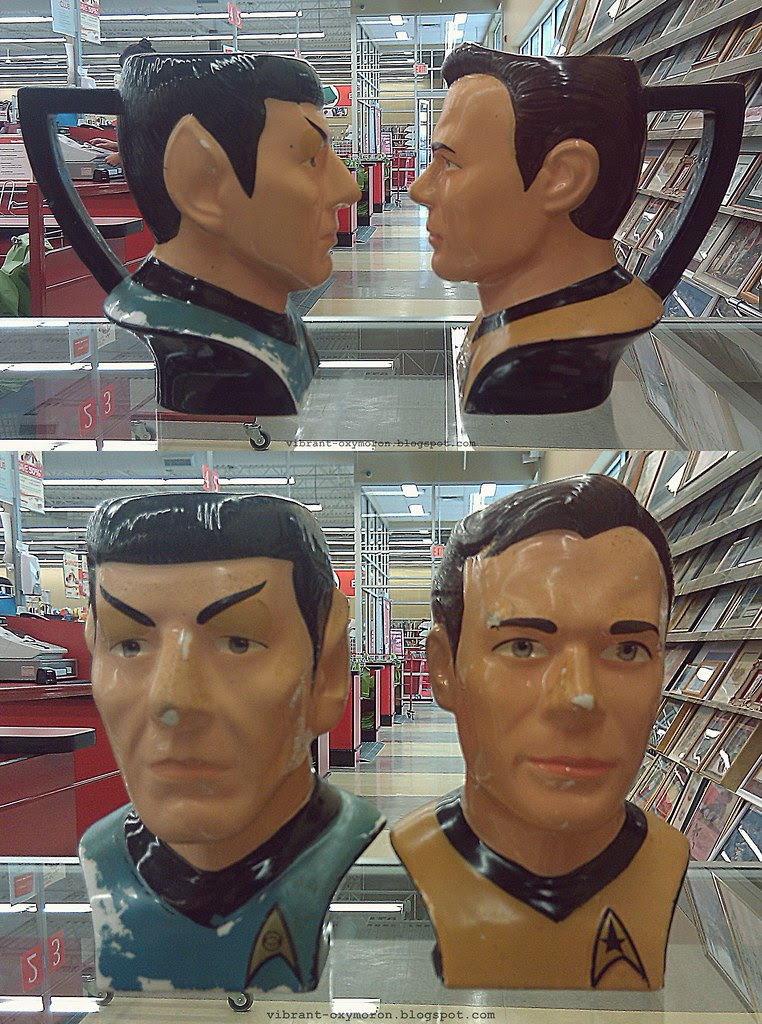 I called over one of the cashiers to check the price - I would still have gotten the mugs if they were not fifteen dollars each.

In fact, I would still have gotten them, if only I had more funds at the time. The cashier did allow me to photograph them before walked home, dejected. One day I shall find another set, whether it be in a thrift store or online. They will be mine.
Posted by T'Laina at 22:35 5 comments:

Star Trek Forums - Why They Are Amazing, And Why I No Longer Go On Them.

Star Trek forums are amazing. They allow people to communicate with others that have the same interests, and share things that they find interesting. One can enter a specific "thread" and read various opinions and explanations for episodes, personalities, and inconsistencies. There are people who prefer for discussion to be canon, and those who wish to include all references such as novels and comics. Entering a Star Trek forum is truly a unique experience - at least to me.

A while ago, I decided to give it a try.

I made an account and looked around - engaging in conversations (or attempting to do so) and offering opinions. I found, right away, that people can be very severe - even mean. I also found it to be very intimidating. Soon I found that many who started their own threads were merely sharing things that they found interesting or asking questions. I soon did so, but relating to my blog and asking for suggestions and attempting to share that which they may find interesting. These threads, however, were promptly closed. I tried to understand the reasoning they gave me, and the next time I posted something I searched for an existing thread. Apparently, if there is already a thread but has not been used in a while, posting is not wanted. I had not been on the forum for many months when I decided I would try once more.

I don't know why I can't seem to understand this sort of thing on the internet, why it should be so difficult for me. I do not want to blame Aspergers, because even then I am sure I can understand if I try hard enough, and avoid misunderstandings. I searched for the forum rules to review once more, but could not find them. While amazing for fans, I think I will stay away from forums for a while.

My first official vlog - the last one was just rambles and trying to figure out all of the video stuff on my computer. In this one, I answer some simple questions about Star Trek. I also have T'Mol-kom and T'Vet running around on my shoulder.


If you have any vlog suggestions or questions that you want me to answer, leave a comment and I will do my best to include them!
Posted by T'Laina at 21:54 4 comments:

My Name is T'Laina and I Vlog Now.

While taking a break from all of the Comic Con "stuff" I have been working on, I found an EPSRC funded site that focuses on faces and facial recognition. One of the projects on the site allows one to upload their own photos and transform the face into different art styles, ages, and ethnicities. I decided to try it out with photos I had taken of myself as a Vulcan:

For anyone wanting to try this out for themselves, you can visit the Face Transformer here.
Posted by T'Laina at 23:39 No comments:

One of my favorite parts of Comic Con was seeing William Shatner again. I got in line right away, so I could get as close to the front as I could - fortunately, there was an empty seat in the first row. We had to sit the room for an hour before the show, so I conversed with some of the people I was sitting with. We talked about Star Trek and Doctor Who, and watched Night Court (with Brent Spiner as Bob Wheeler) on somebody's iPhone.

Finally, he came down the stairs and made his way to the stage: 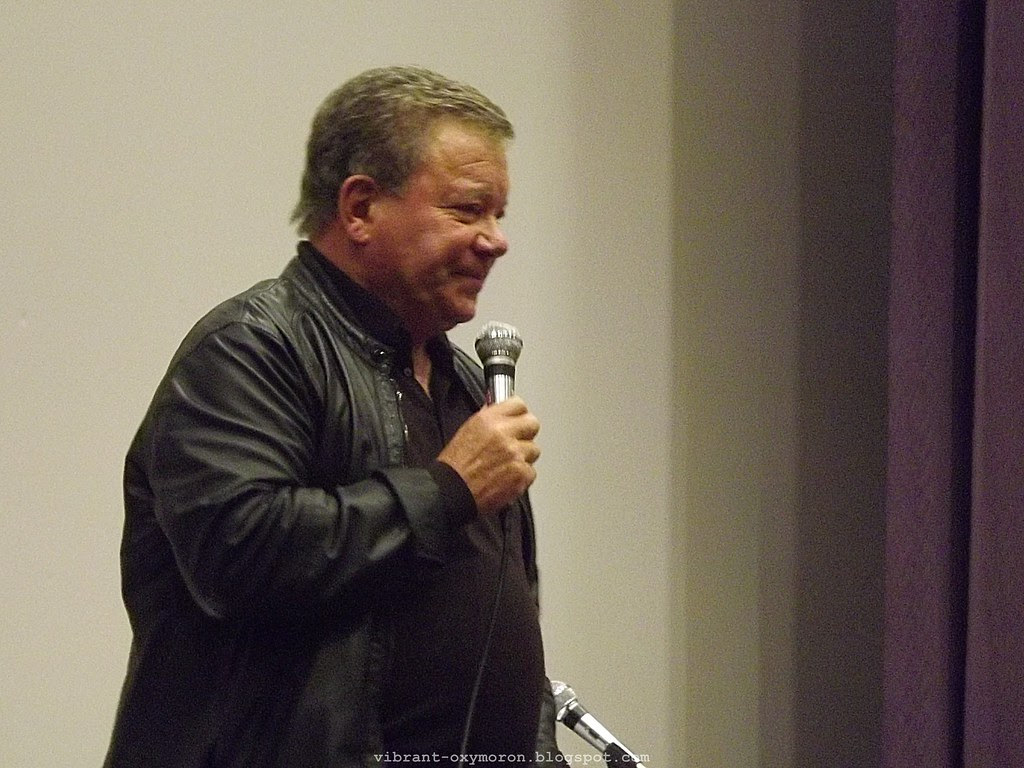 This time he was wearing jeans and a leather jacket, as opposed to the suit he wore for "How Time Flies". He looked amazing, and hearing him answer questions was great. Fortunately, we were allowed to take video (which I did!). Unfortunately, the sound was terrible. So here are some quotes from the session: 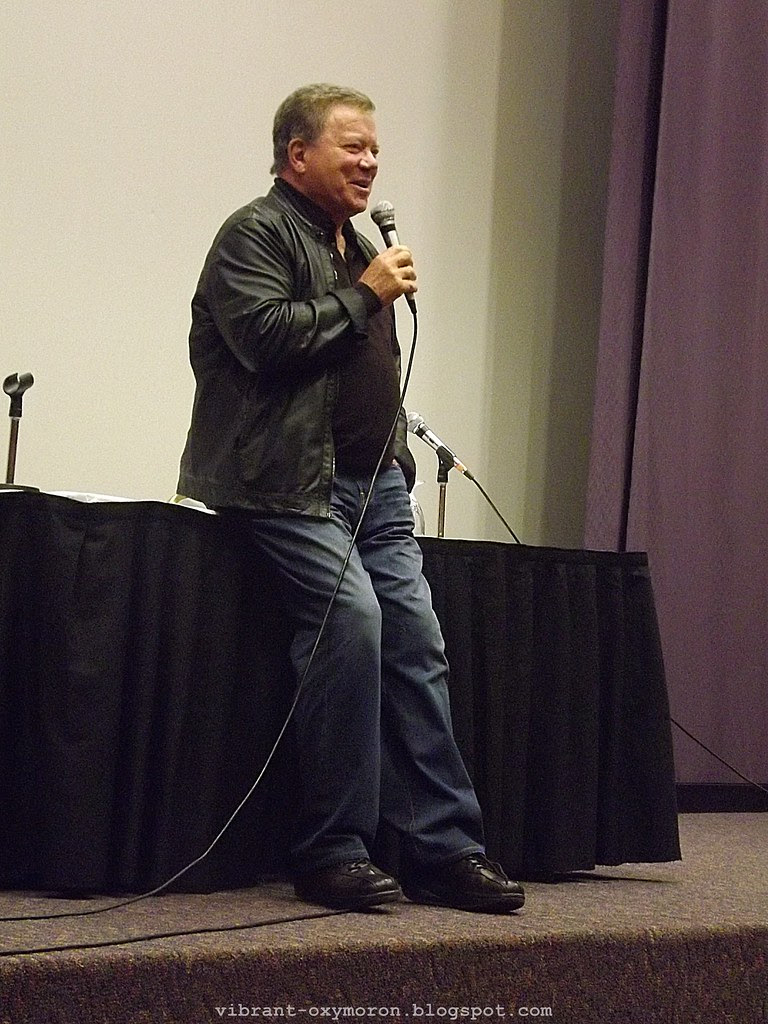 He also speaks about how people get addicted, his site "MyOuterSpace", "Weird or What?" and horse competition he was in the day before. He also tells us that around the time when one of his children was born, he was watching the television and a March of Dimes commercial came on. He watched as the "tiny tim" polio poster child made his way across the screen, and this affected him greatly - he was lucky, his child was healthy. But sickness can happen so suddenly. He is now a spokesperson for March of Dimes.

One person said to Shatner - they heard that he does math problems in his head before a show. He got a big laugh out of that one, and told us that the only math problem he does is "I'm one... where's my other one?".

Now, for the video! I will leave you with part one, and the links to the continuing videos. I hope you enjoy - and I do apologize for the sound quality. (Also you can hear me giggling throughout the entire thing.)


Part Two (on the brain, his horses, how his life has changed, and March of Dimes)
Part Three (where he talks about "stupid Paramount")
Part Four (on Weird or What, acting on stage, and doing math problems in his head)
Part Five (where he explains his "singing" and his spiritual views)
Part Six (where he talks about careers and such)
Posted by T'Laina at 23:41 No comments: