Uniforms for Star Trek: The Motion Picture - From the Files of Starfleet Command Headquarters

U is for Uniforms!

Within the Marvel comic "Spock... the Barbarian!" from 1981 is a few pages on Starfleet uniforms as seen in The Motion Picture. The coloring is a little off from what we see in the Motion Picture, but the information still applies. 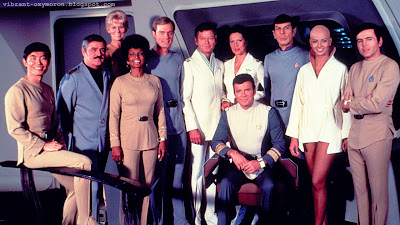 First we get a look at the Class-A uniforms, along with the gold insignia styles and their ranks. The Class-A uniforms are only worn when VIPs (ambassadors, admirals, etc.) are on board, or at ceremonial functions such as funerals, special dinners, or weddings. During the motion picture we see Kirk in both the Admiral's (or Flag Officer's) and the Captain's Class-A uniform, as he was an admiral at the very beginning of the movie until he took over as Captain.

This page also informs us on the "Commodore" rank - "An honorary title; usually the senior Captain in an organization - a captain who performs the duties of an admiral." 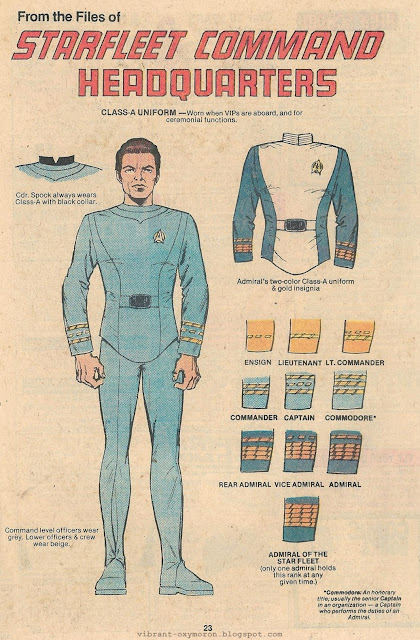 And by the way, those are life support monitor belt buckles on the front of their uniforms (referred to in this guide as a bio-scan belt buckle).

The Class-B uniforms are more casual, with either long or short sleeves, and are worn daily around the ship. There are three uniform colors, shown below, and shoulder tabs and insignia showing department and rank. A white shirt and grey pants are worn by command level officers, and  the lower officers wear beige. Enlisted personnel wear light and dark brown. The insignia worn on the breast match the tabs in color.

Rank is indicated by stripes, except for the yellow squares worn on the tabs of Chiefs. 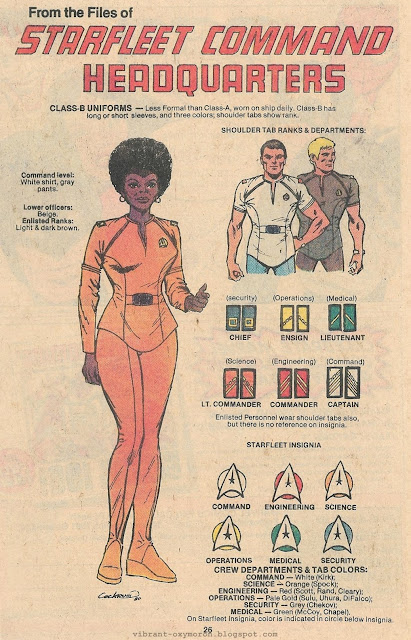 The medical Class-A uniforms are very much like the others, but with a v-cut collar. Dr. McCoy, being a command level officer, wears grey, while Dr. Chapel wears beige.

For informal occasions outside of sickbay, Both McCoy and Chapel wear white pants, with either a white tunic (McCoy) or a beige tunic (Chapel) over top. 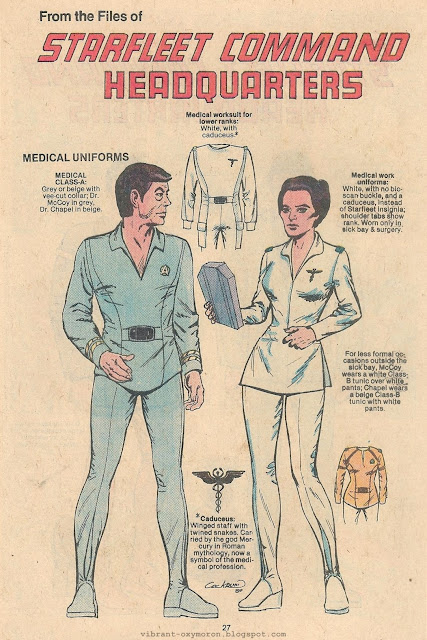 The general leisure uniforms (wraparound tunics) are generally worn while off duty. Like the other uniforms, these come in grey, beige, and brown depending on rank.

The duty jackets/excursion jacket worn by the landing parties were manila, with colored strips around the upper arm indicating rank. There is a "blooper" in the Motion Picture where at one point, Spock and McCoy's rank strips are reversed. The duty jackets have two large pockets on either side. There is also an alternate duty jacket for colder conditions, with fur cuffs and a hood. 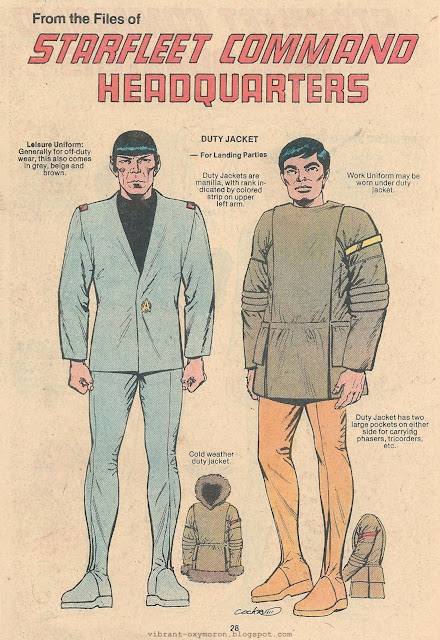 The work suit uniform is worn by engineering, technicians, and maintenance personnel on the job, and sometimes under a duty jacket. Kirk and Spock wear these uniforms as well in grey. These suits also come in white, brown, and beige - and green on planetary stations. Also known as a jumpsuit, some of these suits had large pockets on the thighs.

The engineering anti-radiation suits are worn "in and around warp engines and matter/antimatter power chambers" and come in white or brown. 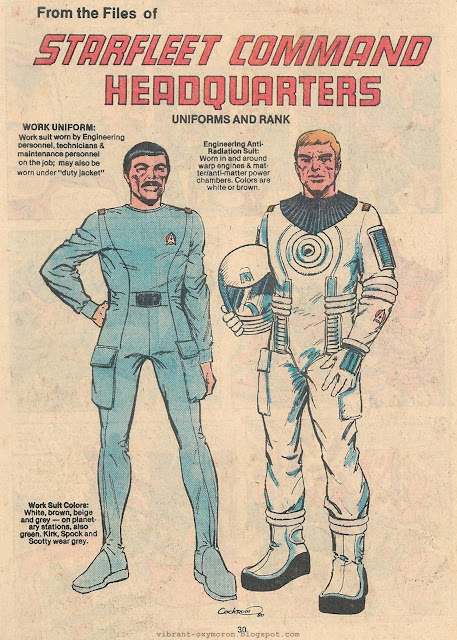 The shoes worn by the Enterprise crew are attached to their trousers.

Some security personnel (starship and base) wore full body armor with a helmet, which was dark with white details. These pages also fail to go over the protective suit worn by certain (minor) members of the crew, the thruster suit, the civilian tunic (also seen only on minor/background characters), pressure suits, and the petty officer insignia (which is a gold triangle).