P is for Primitive Vulcans!

The first Vulcans appeared much like the paleolithic humans of Earth. They were slowly learning to use tools, and without formal speech. When these primitive Vulcans inhabited the planet, most of the it flowed with water and was covered with lush vegetation. The area surrounding Mount Seleya was one of the exceptions, much like we know of it today.

These primitive Vulcans were generally peaceful, communicating telepathically and living off of the abundant supply of food and water given to them by the planet. They did not understand why the nourishment was there, about death, or why urges would come upon them every so many years that sent them to act strangely upon one another (perhaps what we now know as the Pon Farr). These Vulcans could go without food and water for at least a week, although they very rarely needed to do so.

I once drew a picture of how I imagined these primitive Vulcans, but with some modern touches - less hair, attention payed to aesthetics, etc. I posted it before, but I am going to show it here as well: 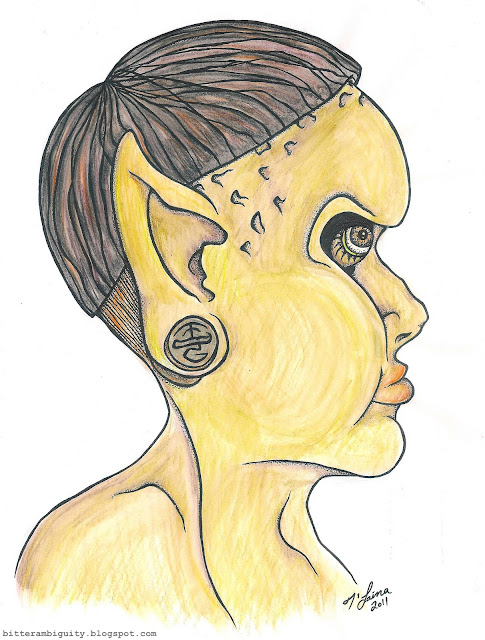 As I mentioned, there was no formal speech for a very long time - there were no names. They seemed to believe in a higher power referred to later as "the Other". They were without worries, as "the Other" always knew what was best for them.

Eventually there would be one who desired exploration rather than mere "being" - it is said that this Vulcan often walked farther than any other , eventually realizing that by hollowing out a gourd-like plant and dipping it in the water, one could drink more easily as well as store water for later. Because of this discovery, a Vulcan would be able to travel father, and for longer. It is said that he walked until the water and vegetation were gone, after which he pressed on to the monstrous sight of what would later be called Mount Seleya.

It is also said that it is in the desert leading to Mount Seleya that the concept of language was discovered - a gift from the Underlier (also known as the A'kweth, and sometimes as the Tcha'besheh). This gift was passed on by telepathically or physically presenting an image or item, and uttering a sound/series of sounds which would become it's name. The Vulcan was named the Vulcan equivalent of "the Wanderer", and was called upon to come up with names - soon, song was also be invented.

This was shortly before an intense solar flare from 40 Eri A transformed the planet into what we know today - burning the forests and boiling seventy percent of the oceans until all that was left of the ocean beds were scorched sand and mud, and all in no more than a day. Most of the living creatures on the planet died, and only the toughest Vulcans survived.


Note: Information taken from "Spock's World" by Diane Duane.
Posted by T'Laina at 23:39