Klingon Foreheads - A Short Explanation From "Blood Will Tell"

K is for Klingon!

A lot of people wonder why the TOS Klingons look so different from the others we have come to know. Truthfully, it is because of budget differences. Rumor has it that Gene Roddenberry had always wanted the Klingons to appear as they did from TMP on, but there were a lot of restrictions when it came to the original series.

But the world of the creators should have nothing to do with the story - the fans needed another explanation. In Trials and Tribble-ations, Worf is placed along side the Klingons from "The Trouble with Tribbles". In order to explain the difference,  this was added to the script:


Bashir: "Those are Klingons?"
Waitress: "All right. You boys have had enough."
Odo: "Mister Worf?"
Worf: "They are Klingons, and it is a long story."
O'Brien: "What happened? Some kind genetic engineering?"
Bashir: "A viral mutation?"
Worf: "We do not discuss it with outsiders."

More information is gained while reading the comic IDW comic "Blood Will Tell". 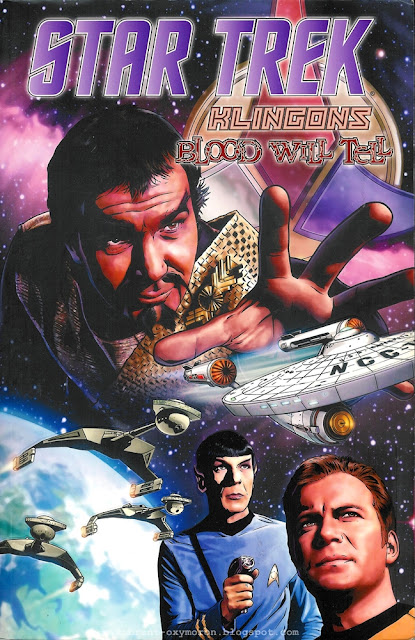 "Blood Will Tell" is actually an amazing comic - the reader experiences the stories of conflict between the Klingons and the Federation from a Klingon point of view. Not only that, but in the collection of Volumes 1-5 the story is repeated in the Klingon Language variant edition. I have scanned a portion of the page dealing with the facial differences in Klingon, below which is the English translation (taken from the English portion of the comic): 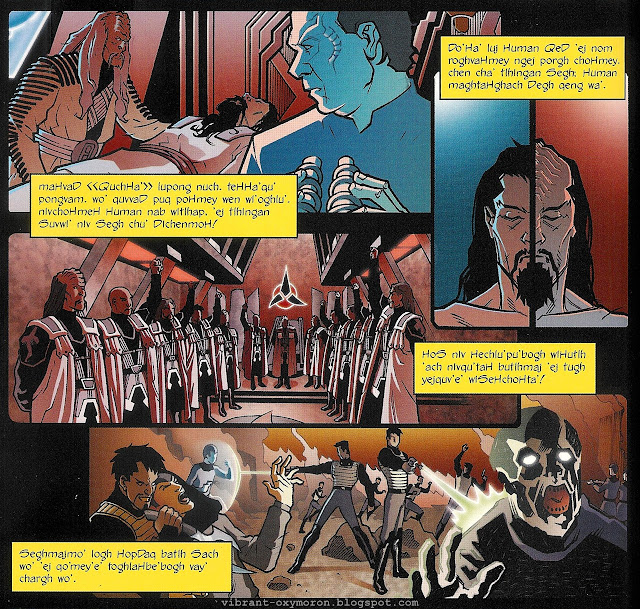 "QuchHa', the cowards called us. 'The unhappy ones.' How far from the truth. Generations ago, we were conceived for the glory of the Empire, to take the humans' own plot for genetic superiority and create a new race of augmented Klingon warriors!

Unfortunately, the Humans' science failed, and its genetic mutation spread like wildfire, leaving the Empire with twin Klingon races, one bearing the mark of the humans' treachery.

Although we may not have had the superior strength that was intended, we retained superior ambition, and soon we had gained control of the High Council itself!

It was our kind who led the Empire's glorious expansion into deep space and conquered countless worlds."

Much is still unclear, and the comic is not considered canon, but I am glad to take any piece of information I can find in my quest to fill in the gaps.
Posted by T'Laina at 00:07