C is for Classic Cybermen!

I must admit, I was initially introduced to the Cybus Cybermen originating from the alternate universe in the new Doctor Who episodes. It wasn't long before I was thinking about them all the time - replaying the episodes in my mind. Replaying the screams and mechanical sounds of the "upgrading" or "cyber-conversion". They were intriguing - they were intimidating.

And then I started watching the classic episodes. 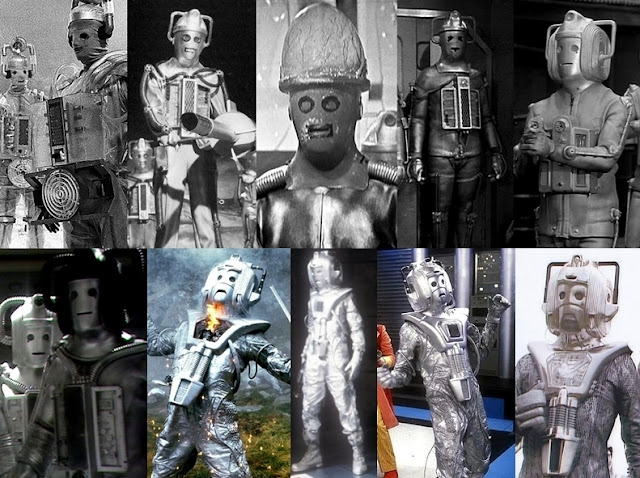 The Cybermen were first confronted by the First Doctor (William Hartnell) in "The Tenth Planet", aired in 1966. It is in this episode that we learn about the origins of the "Cybermen".

Earth once had a twin planet, named "Mondas" (they didn't teach you that in school, did they?). As Mondas began to drift to the edges of space, the people of Mondas began to grow weak. To combat this, the scientists began replacing the people's limbs and organs with metals and plastic. Their emotions were also removed because they made them weak, and they became the Cybermen.

At the time the Doctor arrives, they are still partly flesh - specifically their hands, and a portion of their face. Mondas is, at this time, the tenth planet in the Solar System, and the Cybermen are intent on destroying the earth by absorbing it's energy. They plan on taking humans back to Mondas in order to change them into Cybermen.

Eventually their proximity to the Earth causes Mondas's energy to drain, and the planet begins to break apart. As the Cybermen got their energy from the planet, they collapse and are disabled.

The second serial featuring the Cybermen was "The Moonbase" in 1967, where they encountered the Second Doctor (Patrick Troughton). These cybermen were much more advanced, and had no visible flesh. In these episodes, the Cybermen are on the moonbase and have been stealing human bodies. To incapacitate their human victims, they may use the electricity generated from their hand to stun the bodies. They then augment the bodies so that they are under cyber-control.

The chest units of these Cybermen can be dissolved using chemicals that attack certain plastics.

Once again, the Cybermen plan to destroy earth, but the Doctor deflects their cannon shots at the moonbase with the gravitron, and aims it at the surface - casting the Cybermen off into space.

The Second Doctor must confront the Cybermen again in the 1967 serial "Tomb of the Cybermen". The Cybercontroller had previously returned the surviving Cybermen to Telos, where they built tombs to be frozen in to preserve their power supply.

With the help of the Doctor, a group of people (who had later found the lost tombs of the Cybermen) enter the remains in order to find the remains of the Cybermen. Two men - Klieg and Kaftan - reveal that they plan to revive the Cybermen and have them become their allies, which they are sure to do as they will be grateful for their revival.

This was, however, a trap by the Cybermen - to wait to be revived, and then take the suitable bodies to be converted into Cybermen themselves. The Cybermen as well as those converted would then invade the Earth.

The Doctor re-freezes the Cybermen, and the Cybercontroller (center of the photo below) is electrocuted and destroyed. A Cybermat escapes, and heads to the city.

These Cybermen were able to shoot electricity from their wrists, use mind control, and used hand held weapons (namely a gun that they procured from a weapon's testing room of Telos). The Cybercontroller has a dome-shaped head though which one may see his brain. He is without a chest unit, and was taller than the other Cybermen.

The Second Doctor met the Cybermen for a third time in the 1968 episode "The Wheel in Space". The Cybermen were not controlled by the Cybercontroller, but instead by the Cyber-planner - a pure machine.

These Cybermen in this serial are able to control the minds of humans.They differed slightly in design, and had "tear-drop" eyes and a dip in their mouth-slits. The Cybermats can be destroyed using sonic waves.

The Second Doctor meets the Cybermen for the fourth time in the 1968 serial "The Invasion". This time, however, they look much different. These Cybermen appear to be stronger, more powerful. They were also controlled by the Cyber-planner, and used handheld Cyber weapons.

In this episode, the Cybermen take over London, and announce that they will use a megatron bomb to destroy life on earth. The megatron bomb is later destroyed by a missile, and the last Cyberman ship is destroyed by a rocket - thus stopping the hypsnotic signal that was being used by Vaughn.

These Cybermen also have teardrop eyes, but a simple mouth slit. They use more long-range guns, and a weapon built into their chest units.

The Fouth Doctor (Tom Baker) came across the Cybermen in the 1975 serial "Revenge of the Cybermen". The Cybermats are also present.

The Cybership is now controlled by a Cyber-Leader. These Cybermen's weakness is gold, as it chokes their respiratory systems because it is non-corrosive. The Cyber-Leader's head piece is partially black. These Cybermen have a weapon built into their helmets, and they also use bombs.

The Fifth Doctor (Peter Davison) meets evolved Cybermen in the 1982 serial "Earthshock". These Cybermen used Cyber Weapons rather than mind control. Once again, they plan on destroying the Earth...

The leader is asphyxiated by having Adric's gold-plated Mathematics Achievement badge fed into his chest unit by the Doctor. The Cyber-Leader's tubing was black, unlike the other Cybermen. These Cybermen use hand held weapons.

The Cybermen made a brief appearance in 1983's The Five Doctors, when The First, Second, Third, and Fifth Doctor are in the Death Zone on Gallifrey.

The Sixth Doctor (Collin Baker) must defeat the Cybermen in 1985's "Attack of the Cybermen". The Cyber Controller had evolved since we last saw him in "The Tomb of the Cybermen", and a Stealth Cyberman was seen briefly and a darker color than any of the others - almost black. This Cyberman used a Cyber Gun, and had black tubing. There are many rogue Cybermen who were driven mad by faulty tombs. Some of the Cybermen kill with their bare hands, using their strength instead of weapons.

In this serial, the Cybermen capture the Doctor and his companion, and hope to use the TARDIS to save Mondas from ever being destroyed. They had stored the Cybermen from "The Tenth Planet" on Telos, in the Cryon's refrigerated cities.

The Cybermen had planned to prevent the destruction of Mondas by using the TARDIS to travel back in time and destroying the Earth with Halley's comet before Mondas absorbed too much energy. The Doctor stops this from happening and destroys the Cyber Controller and guards with their own weapon.


The last appearance of the Cybermen in Classic Doctor Who was in the 1988 serial "Silver Nemesis" - with the Seventh Doctor (Sylvester McCoy).

In this serial, the Cybermen are England, competing with A 17th Century sorceress and a group of Nazi's to gain ultimate control of a Statue created by Rassilon as the ultimate defence for Gallifrey - a weapon which can decide the fate of the entire universe. When the statue is launched into space, however, it disobeys the Cyber Leader and destroys the entire Cyber fleet. The Cyber-Leader is killed with a gold-tipped arrow through the chest-unit.

These Cybermen have chest units that are completely silver, and were generally shinier. The Cyber Leader's tubing is black. 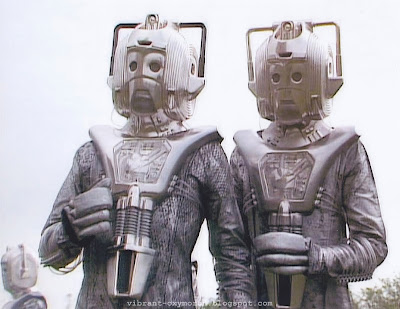 And there you have it, a "quick" look into the history of the Cybermen - I actually wish I had the time to go into more detail. But anyway, my favorite Classic Cybermen will always the Mondasian Cybermen from the Tenth Planet - I love listening to them speak, and the fact that it looks like they have a sock over their heads: