M is for Michael Dorn!

At the beginning of March, as some of you may recall, I had a chance to meet Michael Dorn at the Comic and Toy Expo - I took a lot of video and a few pictures, but I never quite got to uploading them as I promised. This changes today.

I actually saw him on the Saturday, but I was to shy to go up and speak with him. He was sitting at the desk, but there was nobody there - people seemed to be ignoring him. I tried to get up the courage to say hello, but to no avail. I did, however, manage a greeting as I passed him in the hall later that day - to which he responded and practically melted my brain with his charm.

I did go over to talk to him the next day, and had him sign a DS9 publicity photo. We spoke for a while, and then I gallivanted off to search through the comics. 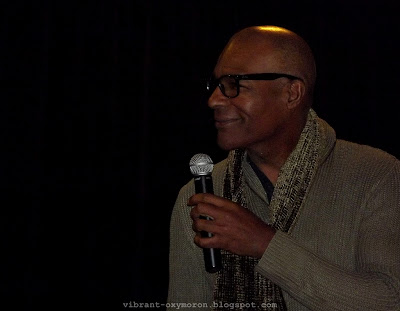 And then came the Q&A session. He is hilarious - a very funny guy. He answered a lot of questions, including a couple of mine, and spoke about how he got the role, the shenanigans going on when the camera wasn't rolling, and how the DS9 cast was much more serious than the TNG cast. I would highly recommend watching the video I took, even if the picture quality gets pretty bad for a couple of minutes. For those who do not wish to watch the videos, I wrote out some quotes as well.


"They called (About TNG casting), and they said 'Aw, too late - we've already had everybody cast, and if anything happens in the future we'll let you know'.  And to me, that's a big brush off, so you kind of go 'Okay, thanks, goodbye, later.' And then two weeks later, I get a call - and my manager says 'Hey Michael, they want to see you for the role of a Klingon' - and I knew, I mean I was a fan of the original so I knew what they wanted. So that's - that's how it happened.


"I was in an acting class at the time, and this wonderful teacher taught me how to - you know, you walk in the building - you walk in the set - you walk, wherever you're gonna go to audition as the character. 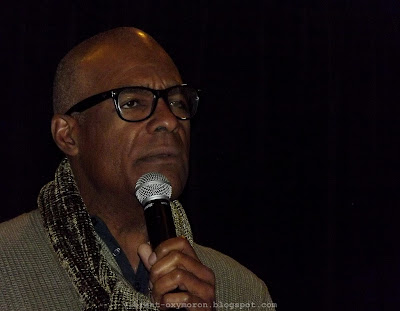 And so I walked in, very stern, and not very talking to people, and people are like 'Hey Michael, how you doing?' (Michael glares sternly) And I went up to the secretary and I said (in what we now know as Worf's voice) 'Excuse me. Is there a place where I can be by myself.' And she goes 'uh... yeah, over there' ... 'Thank you.' And I walked in there and I sat by myself, and then I went into the audition, and I knew - you know, I've seen Gene Roddenberry, and Bob Justman, and all these people - and they're sitting there.  And I wanna go 'Hey, Gene! Hi!' you know, but - I was very stern, I didn't crack a smile and just did it, and left. And said, 'thank you very much.' and left. And that's how it happened. And I guess they probably just went, '... he's nuts.' you know? 'We like him.'"


"I think the Worf and Dax thing was a great story line."

"I still think she (Nicole) should have ended up with Worf. At the very end, when he's leaving, she goes... looks at Julian, and says 'I'm sorry, Julian, I can't do this. I belong with Worf.' and goes off with him - but that didn't happen."


I got to ask a couple questions of my own - I asked, first of all, if he related at all to Worf:


"I actually learned a lot, or admired a lot, about Worf - because he was really a strong character and all that, but he was also learning, and trying to understand , you know, Klingons, and aliens, and things like that and he was struggling with it, but he was, he was learning."


"Worf wasn't exactly the brightest bulb in the world - I mean, it wasn't he was stupid, but he was just sort of like - he didn't understand... people. In general. 'You want me to do that? Really?' You know? And I'm kind of like that too." 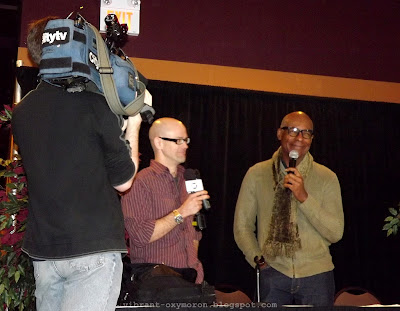 
"My favorite piece of technology, which was on Deep Space Nine, was... the Defiant. Yeah, you know - that's a very cool ride."


"There's a youtube video that somebody put together of Worf getting shit down every time he says something, you know? Which is pretty funny. 'Well Captain I think we should -' 'No, Mister Worf, Shut up!'... It's a very funny video..."


"Whenever Patrick and Jonathan would be standing at the screen, and I'm back there and I have to be very serious, and they'd turn and walk back to their seats - they were always making faces at me."
"And you'll see in a couple episodes, I'm like this - (looks down, pretending to concentrate on the console,, pressing buttons)" 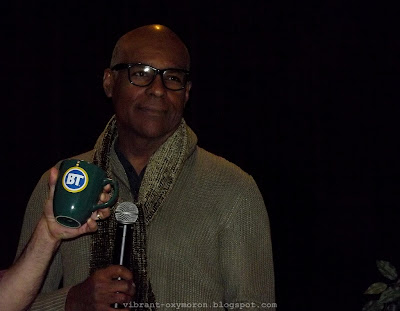 "One time he (Patrick Stewart) actually ran, jumped on his chair and jumped over the horseshoe to get at me - I don't know why... but he jumped up and I caught him - and I'm holding him like this (arms stretched out in front of him) and he looks at me and he went 'Aaaw, I love you Mister Worf.'"

A local news crew also asked him to, for the camera, repeat the line from First Contact - "If you were any other man, I would kill you where you stand". He did - but Michael, that's not how you said it in the movie! I'll forgive you, though - it's been a little while.
Posted by T'Laina at 03:58