Yesterday's Son and Time for Yesterday

Y is for Yesterday!

Remember the TOS episode "All Our Yesterdays"? In this episode, Spock and Doctor McCoy get trapped in the Sarpeidon Ice Age, and Spock starts reverting to the ways of his ancestors five thousand years before he was born. He eats meat, acts aggressively towards McCoy, and falls in love with Zarabeth (an exile). Oh, and then this happens between them:

Gee, I wonder what happened next, after the camera stopped shooting? Don't worry, you'll find out if you keep reading...

There are actually two books that are a follow-up to this episode - "Yesterday's Son", and "Time for Yesterday" by A.C. Crispin. It is in these books that we meet Spock and Zarabeth's son - Zar. I won't go much into the plot, because these are two of my favorite books and I would hate to spoil anybody's experience.

I had always wondered what kind of father Spock would make (although Spock was certainly Saavik's father figure for some time - see "The Pandora Principle"), and things certainly get interesting between Spock and Zar. I recall reading about Zar at mealtime, expressing his angst by eating a meat sandwich deliberately in front of his father.

There are a few strange details, such as Spock being unable to reveal that Zar is his son because of his age. When Spock goes back through the Guardian of Forever to find Zar, he expected to find a baby. Instead he finds a 25 year old man. I find it strange that a man as old as Spock would not be able to have a 25 year old son, seeing as Vulcans live about twice as long as humans, and Spock looks to be quite old enough in the illustrations on the covers. In fact, he looks to be close to the same age as Sarek was in Journey to Babel, and Spock was certainly older than 25 in that episode.

Despite some oddities, however, these are absolutely amazing books. I would highly recommend finding them in any way you can, and reading them at least ten times each. 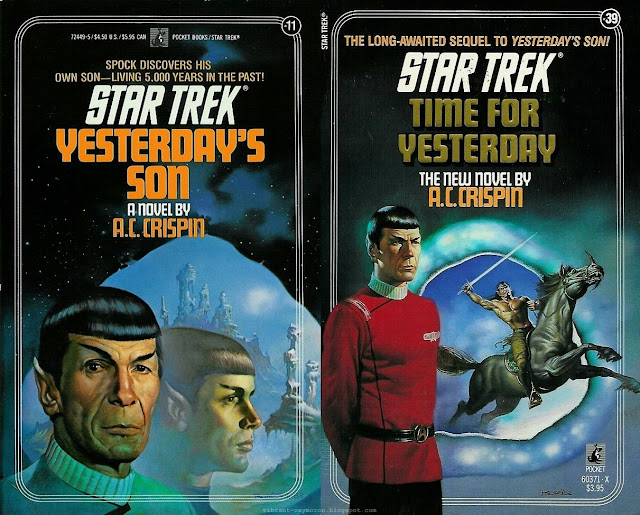 Yesterday's Son (from the back cover):

The Romulans attack the planet Gateway, where Federation scientists are studying the Guardian of Forever - the mysterious portal to the past. The Enterprise must protect the Guardian - or destroy it. But Spock has already used the portal to journey to the past. On the planet Sarpeidon, 5000 years ago, Spock knew a beautiful, primitive woman. Now he has gone to meet his son!

Time for Yesterday (from the back cover):

Time in the galaxy has stopped running in its normal course. That can mean only one thing - the Guardian of Forever is malfunctioning. To save the universe, Starfleet Command reunites three of its most legendary figures - Admiral James T. Kirk, Spock of Vulcan, and Dr. Leonard McCoy - and sends them on a desperate mission to contact the Guardian, a journey that ultimately takes them 5,000 years into the past. They must find Spock's son Zar once again - and bring him back to their time to telepathically communicate with the Guardian.

But Zar is enmeshed in troubles of his own, and soon Kirk, Spock, and McCoy find themselves in a desperate struggle to save both their world - and his!