W is for William Shatner!

Once there was a girl, trying not to trip over her Vulcan robes as she was shuffling around in paper and books on a convention table. I don't know why she was searching so eagerly - she had not money left. But there it was: Personality Presents the Original Crew - the illustrated biography magazine. Upon glancing over at the magazines, her molecules dissipated and the entire convention room was attacked by Canadian demon-beavers. The only way for her mother to restore the balance was for her to buy the girl the magazines, which were 12 dollars for William Shatner and Leonard Nimoy.

That was a close one. 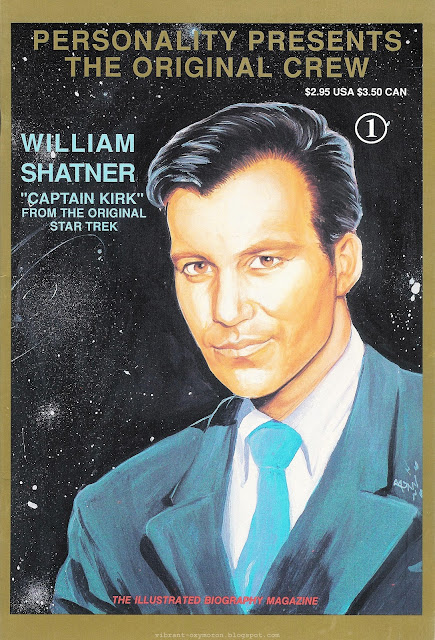 This magazine's art and lettering was done by Aldrin "Buzz" Aw, and was written by Stephen Spire III. The entire magazine in a biography of William Shatner in comic form. I scanned a few of the best pages. Click image to enlarge.

The magazine starts as such: 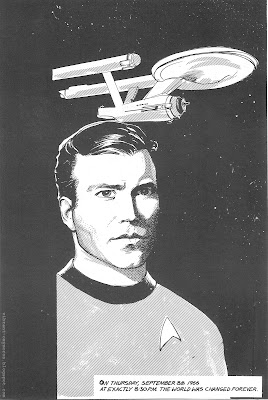 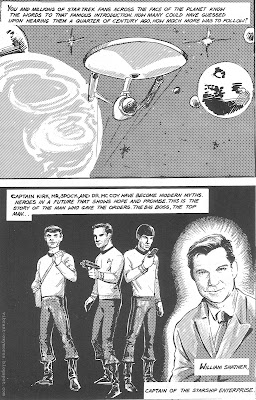 Captain Kirk, Spock, and Dr. McCoy have become modern myths. Heroes in a future that shows hope and promise. This is the story of a man who gave the orders. The big boss, the top man... William Shatner. Captain of the Starship Enterprise."

"Yet, can you picture anybody else playing the part?

Of course he wasn't born a full fledged Starship Commender. He had to work hard to get that post. Although, a thought comes to mind, let's imagine he was born as Kirk.

Doctor: Nurse! Come here quick! I can't believe my ears!
Nurse: What is it Doctor?
Doctor: Listen to this.
Fetus Shatner: Beam me up, Scotty!" 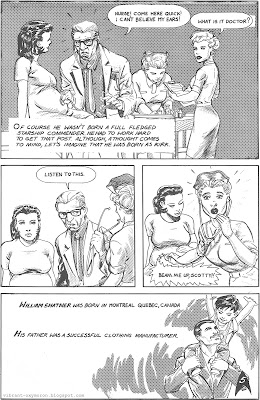 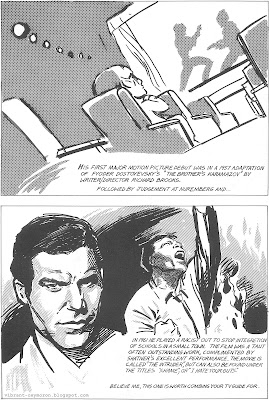 The "fan" shown in this magazine is a short boy, presumably a child, with a Spock hair cut, fake pointed ears, a Star Trek uniform, and glasses. This fan is shown writing letters for the campaign to save Star Trek, watching the show/movies, and standing around looking inquisitively at a picture of William Shatner.

The magazine is written in a very fun way, and goes through most of William Shatner's life up until that point (1991). It goes over his relationship with his father (how he wanted William to take over his clothing business and felt that acting was foolish, leading to William making his own way in poverty) and about how his father dies during the filming of "Devil in the Dark".

There is even an entire page dedicated to the fluctuations in his weight during the filming of Star Trek (TOS). 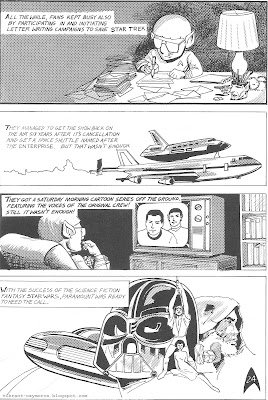 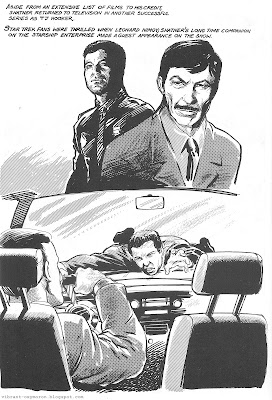 Fun facts from the magazine:
In college he worked for the Canadian Broadcasting Company on radio.
He started his television career on a live show called Playhouse 90.
One of the Twilight Zone episodes he appeared in was called "Project Vulcan".
His first major Motion Picture debut was in the 1957 adaptation of "The Brothers Karamazov", followed by "Judgement in Nuremburg"  and "The Intruder" (also known as "Shame" and "I Hate Your Guts").
He also played a murderous mental patient in "Impulse", and starred in an epic B-movie called "Kingdom of the Spiders".
Paramount was only ready to make a Star Trek movie after the success of Star Wars. 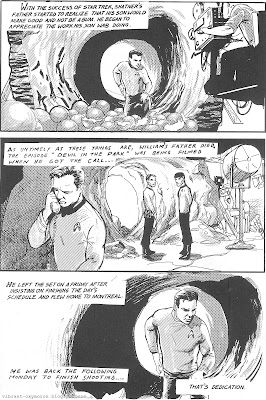 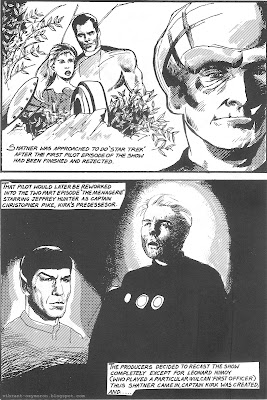 The one thing that troubles me are the spelling errors, of which there are a lot of. Despite these errors, however (do they even bother anybody else?), this magazine is one of my favorites and is a very fun read - especially with the superbly done illustrations. One the back cover is very detailed, realistic painting of Patrick Stewart, and there are other TNG portraits scattered inside as well.

PS. That girl from the beginning was me.