After collecting facts on Vulcan reproduction and reproductive organs from (hyperbole time) a million and one sources, I present to you: an overview that took hours to write because i kept getting distracted. Enjoy, and learn. 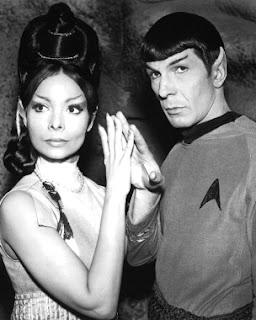 It is a common misconception that Vulcan males only engage in sexual intercourse every seven years during the Pon Farr (first mentioned in Amok Time) - Vulcan males are capable of this at any time after maturation (perhaps without the ability for fertilization at these times). It is only during the Pon Farr that they must mate, or die. The reproductive glands are the only glands that Vulcans cannot totally control.

It has been suggested that this seven year cycle is influenced by the cycle of solar activity in the Vulcan star system - that they evolved to reproduce without fail during the one time when there was the lowest amount of solar activity and radiation levels were at their lowest. While this is an interesting theory, not all male Vulcans go through the Pon Farr at the same time.

The Star Fleet Medical Reference Manual states that when the Vulcans decided to "outlaw all emotion" they realized that they must first lessen the deadly lust that males experienced before mating. Each male was, at first, forced to control their urges by "sublimating and repressing" the physical symptoms. They could only keep this up for seven years at a time.

The Plak Tow (or Blood Fever) becomes stronger during the final stages of the Pon Farr and is initiated by a telepathic mating bond. During the Plak Tow Vulcans lose all emotional control and may become extremely violent. This fever and chemical/hormonal imbalance which will eventually to death if not broken by either succesful mating or through Koon-ut Kal-if-fee (a ritual combat). Some Vulcans, when unable to return to Vulcan, have attempted meditation as a solution.


Note: It has also been suggested that in response to harsher than usual environmental conditions, Vulcan males can mate at any time.

The Vulcan Penis is covered by no external sheath or foreskin, and therefore circumcision has never been necessary. The reproductive organs are almost entirely retracted into the body as a protective measure. The two testes are formed close to the body, and a prostatic body that produces and stores seminal fluid - Vulcan sperm is viable for up to 30 minutes after ejaculation before losing mobility.

It is believed that Vulcan males remain fertile their entire adult lives.

Possibly unlike males, female Vulcans are always fertile. As in humans, females have a vagina, uterus, and ovaries - unlike human females, Vulcan females lack uterine/fallopian tubes, as the ovaries are connected to the uterine body by short ducts. Menstruation is absent as a result of evolution and the need to retain as much water as possible in the hot Vulcan climate. 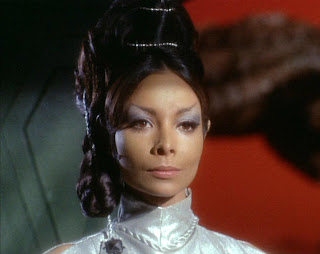 Ovulation occurs each month from altering ovaries, and it takes less than 24 hours for the ovum to enter the uterus. After this occurs, one of two things can happen.
1. The ovum is fertilized - the blastocyst implants itself in the uterine wall, and hormones activate the formation of the placenta. Growth and development occurs in the uterus, and birth is given vaginally. (Caesarian section is rare, but not unheard of in Vulcans.)
2. No fertilization occurs - if no fertilization occurs within 10-14 days, the ovum deteriorates and is absorbed  into the uterine lining.

For a Vulcan female to give birth to twins is very rare, and multiples of more than three is unheard of. As far as twins are concerned, fraternal twinning is highly uncommon, whereas identical twins are the norm. The idea of giving birth to multiples is considered repugnant among Vulcans.

It has been said that females rarely give birth to more than two children in their lifetime, however Vulcans on colony worlds have been known to have as many as five children. This as well as the low twinning rate may also be due evolution and harsh environmental conditions.

These facts are generally the same for all Vulcanoids, including Romulans (as the descendants of Vulcan emigrants) except:

- Romulans no longer endure the Pon Farr (the consequence of harsher world?)
- Romulan females are encouraged to have as many children as their household can support, due to a low survival rate in children.
Posted by T'Laina at 00:10