If I were an Orion Teenager on Earth.

If I were an Orion teenager who was adopted and went to High School on Earth - my friends and I would wear sailor shirts, shave and dye the sides of our heads, and listen to Klaus Nomi, Public Image Ltd and the Manic Street Preachers while making zines and pea soup.

Now that I stop to think about it, that is pretty much my life now. The only differences are that I'm not adopted, and I am human. Oh, and I don't have any friends who listen to any of those singers/bands or make zines - so I just sit here with my laptop and have my own private party every night after work.

"What about Star Trek?" Well, obviously I still watch and read and immerse myself in Star Trek. The reason why this was omitted is that if I were Orion, I would be part of the Star Trek universe and thus there would be no Star Trek shows.

But I digress. If I were an Orion teenager who was adopted and went to High School on Earth, this is what my yearbook photo would look like: 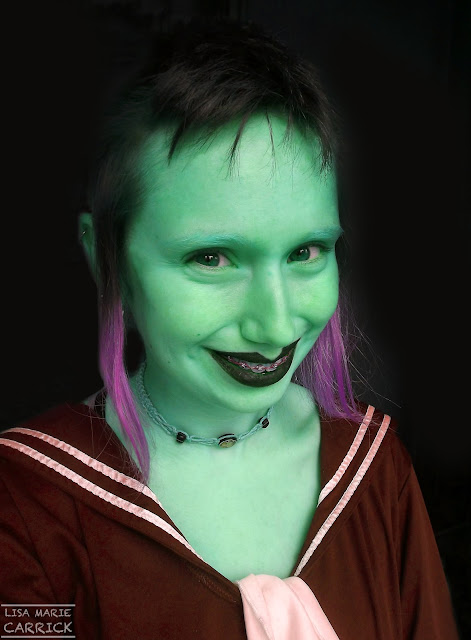 Of course, I would rather be a Vulcan or Human (or even Romulan) teenager going to school on Vulcan.

My skin is so light in this photo (as opposed to the deep Orion skin tone) because the photo finishing companies that do school portraits always do strange smoothing/lightening things to skin for some reason.