You can read part one HERE

Going back now to the Doctor Who calender from 1988, I give you June - featuring Tom Baker as the wonderful fourth Doctor. Honestly, when I think of "the Doctor" I think of Tom Baker first. Everybody knows him and the toothy, grinning mop-headed guy with the long scarf and the jelly babies, but he is so much more than that... 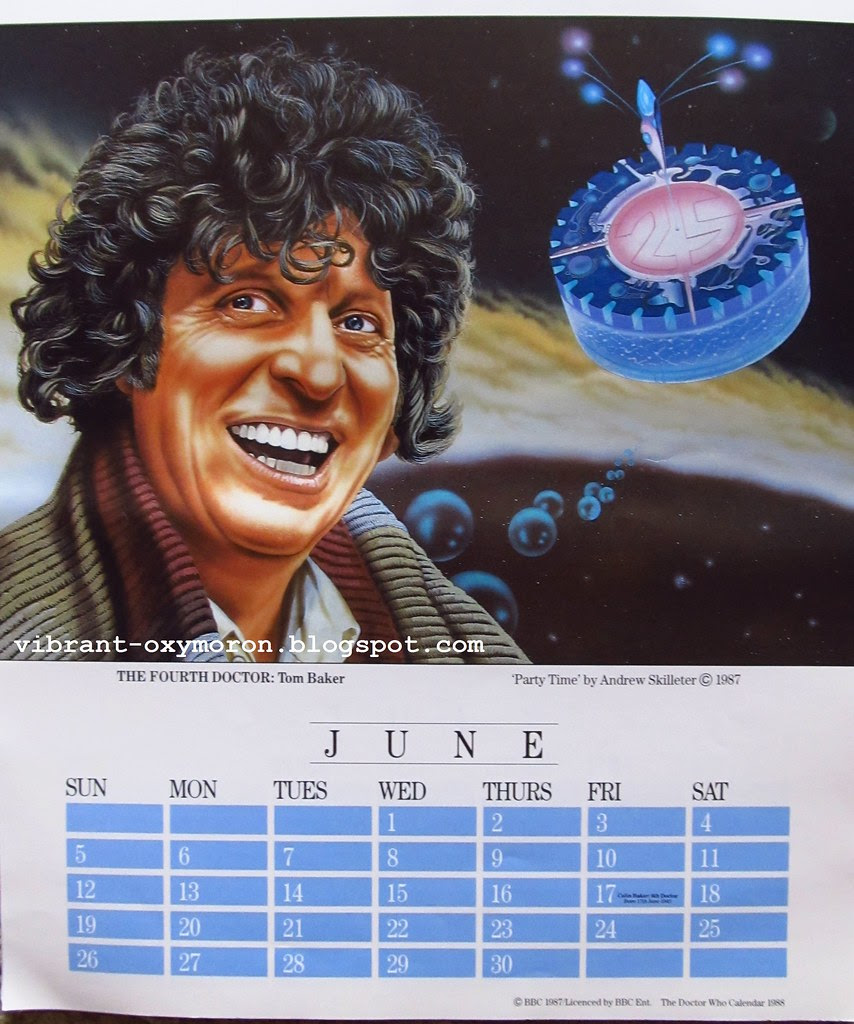 Next we have a either a gargantuan Dalek devastating and entire city, or a normal sized Dalek traumatizing a model city. Either way, it doesn't matter - the simple fact is, Daleks are cool. 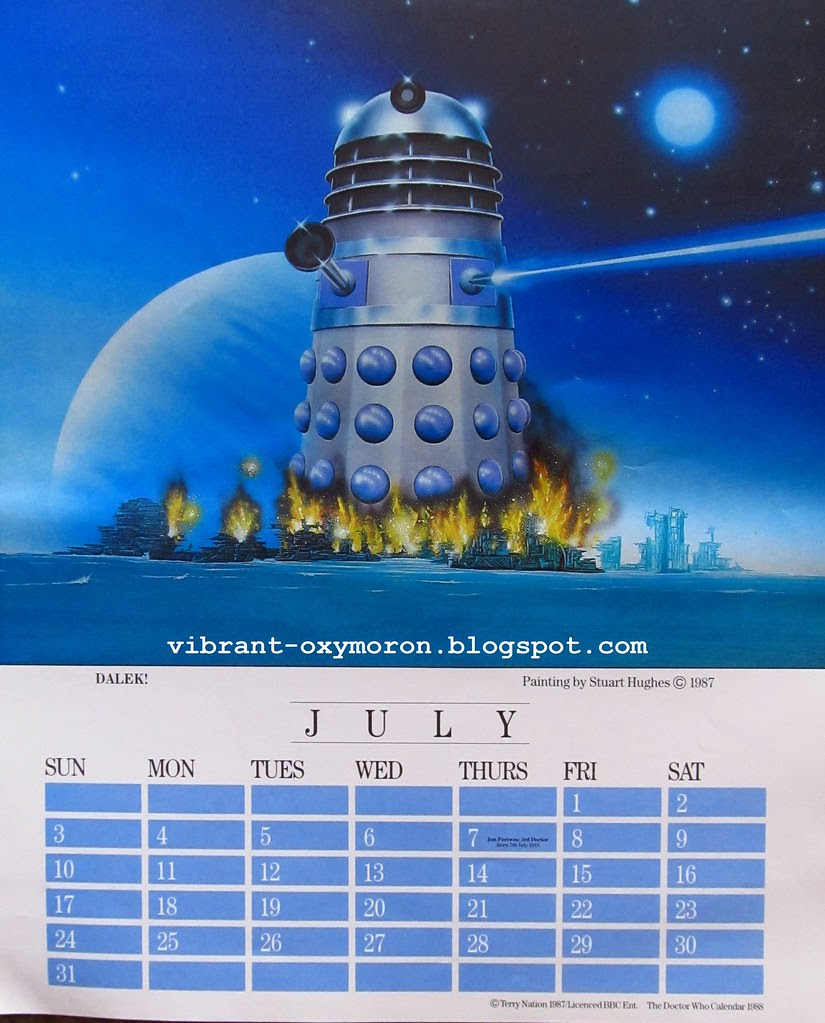 August features the fifth Doctor as played by Peter Davison, looking quite charming as usual... and is that a piece of celery floating in space behind him? Of course it is. 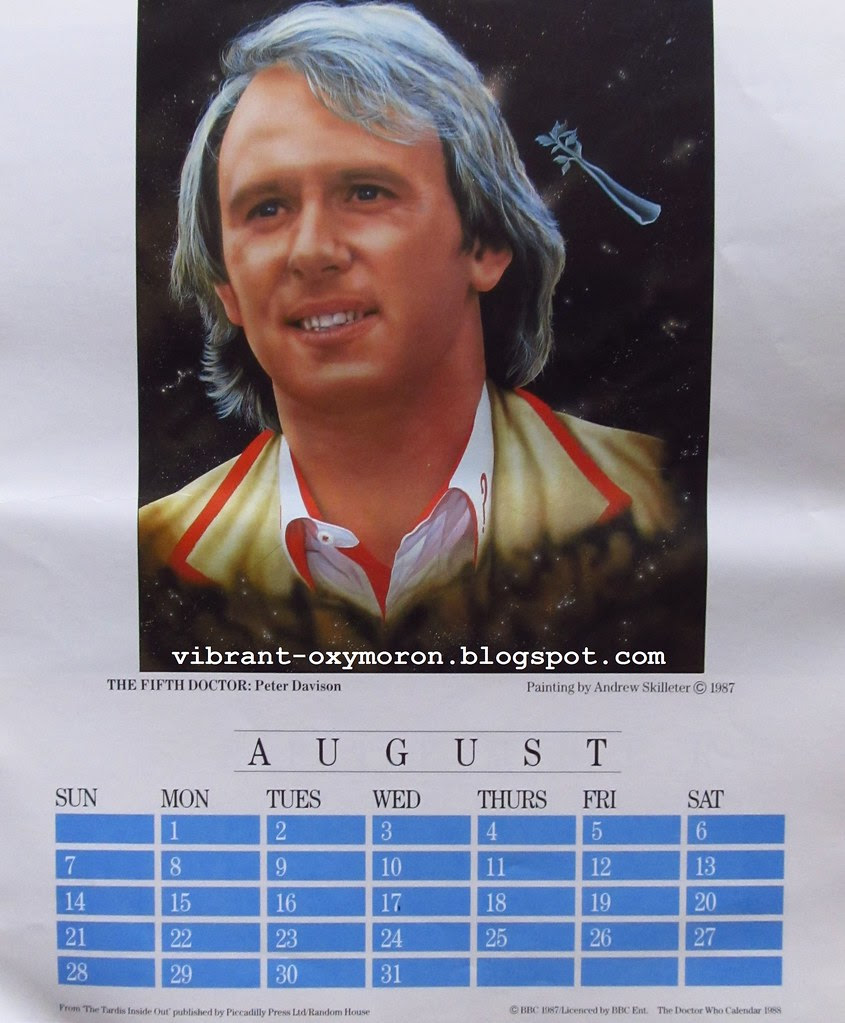 The sixth Doctor (Colin Baker) is accompanied by the Valeyard for September, and looks like a crazy blonde Adam Ant (illustrations by Stuart... that explains it all). For those of you who do not know of the Valeyard - he was the prosecutor at the sixth Doctor's trial, where he attempted to have the Doctor executed and have his last seven regenerations given to him. 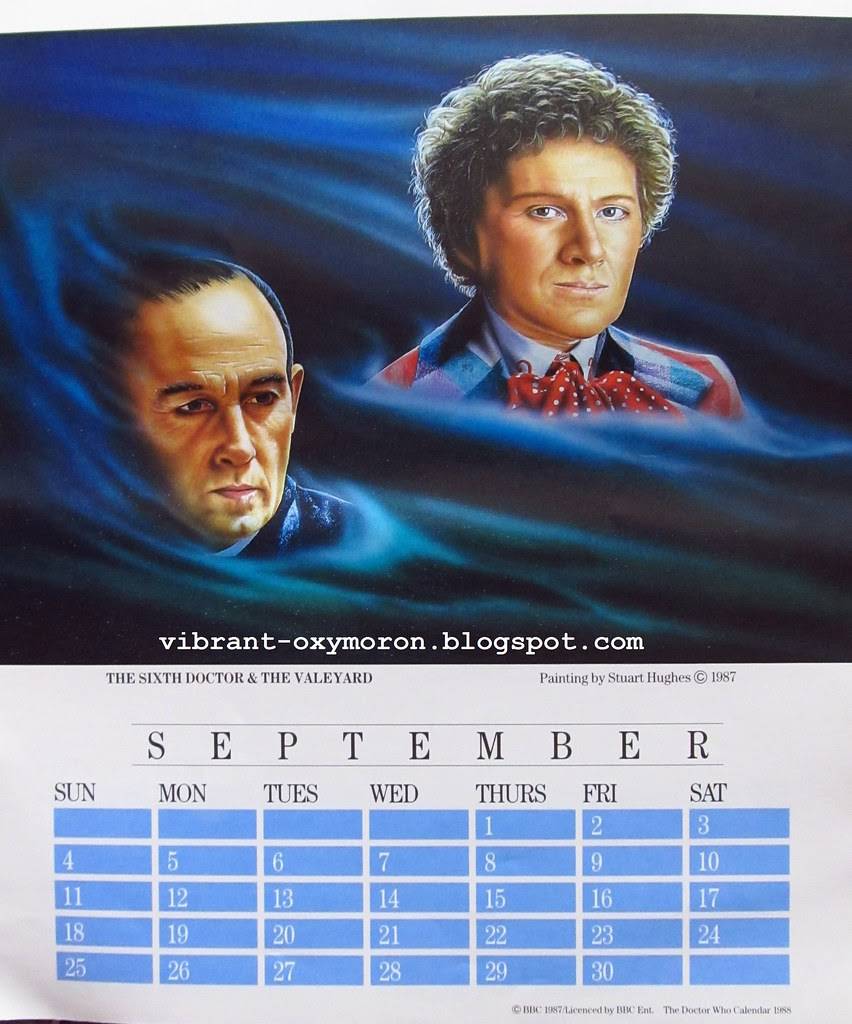 Cybermen. Not just any Cyberman, but one of the first Cybermen from serial "The Tenth Planet". I swear to you now, one of these days I will go to a convention dressed as one of these Cybermen, with a plastic bag stretched over my face and painted silver. It will be epic. 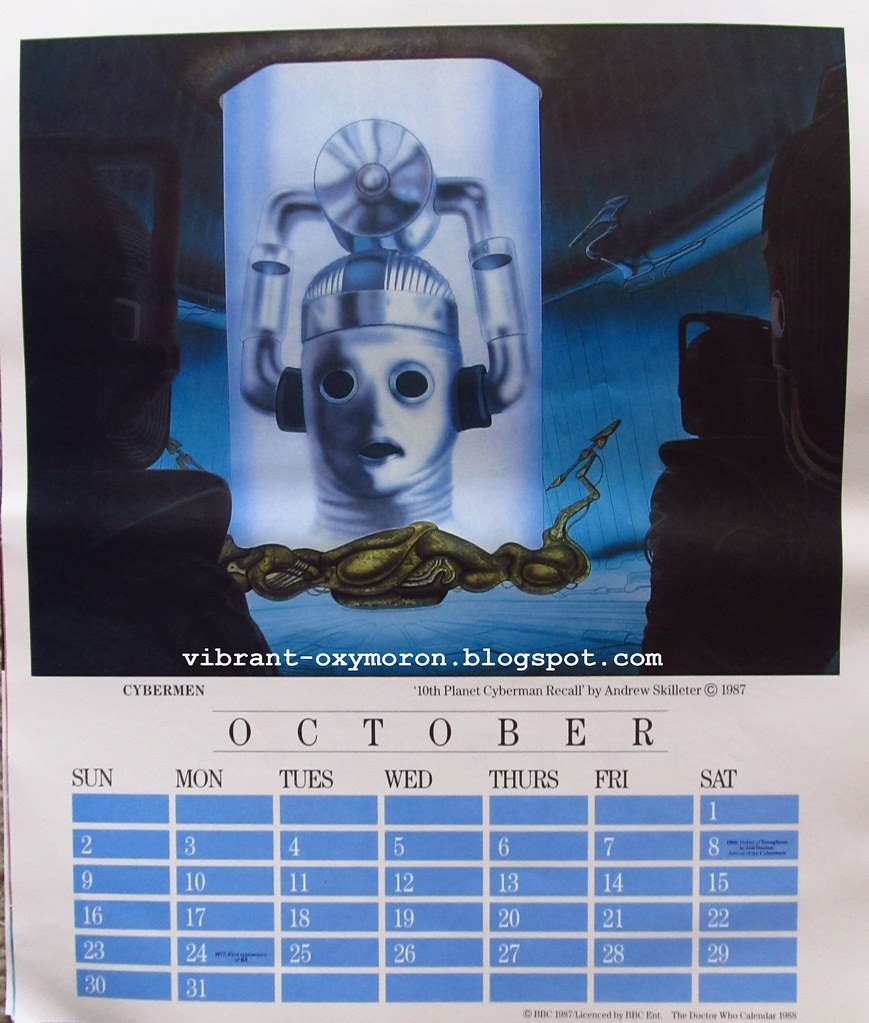 Now for November we see the illustration used for the cover of the calendar, showing all six doctors up until that time. The only one who is the exact same in this picture as on their solo page is the first doctor for some reason. Them and their crazy floating heads. 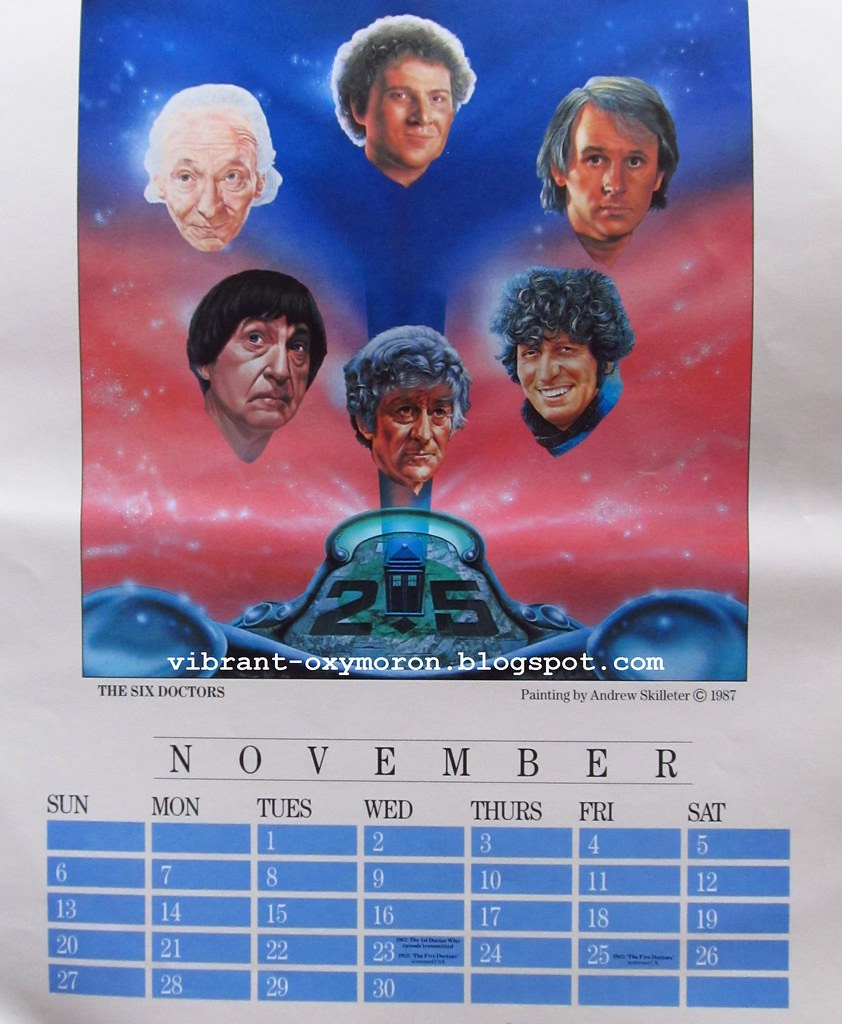 Finally, the last page. Here we see King Yrcanos, a Krontep warrior as played by Brian Blessed. Yrcanos has always reminded me of Sybok, which I assume is because of the beard and eyebrows. 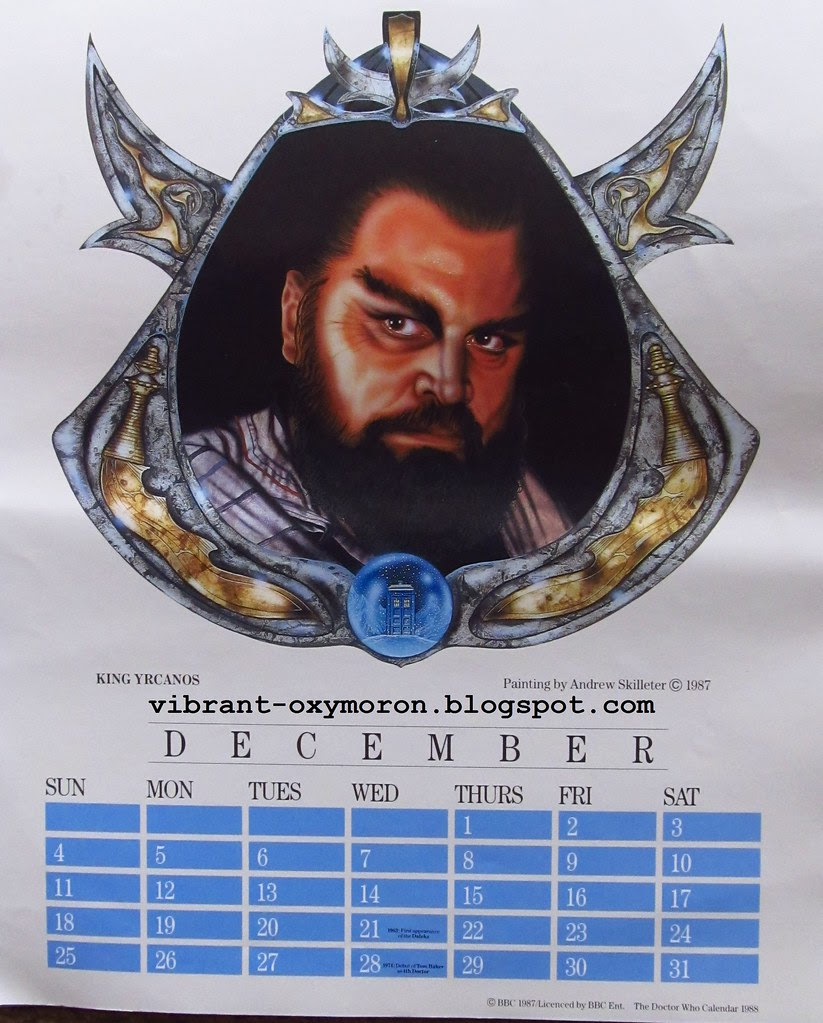 Well, there you have it! A year's worth of Doctor Who illustrations, which actually only adds up to12. Now if you ever find a way to travel back in time, you can print out these scans and bring them with you to 1988, thus saving a couple dollars for a calendar.