Sensorites and the Sense Sphere

S is for Sensorites and the Sense Sphere!

The Sensorites are a humanoid race residing within the Sense Sphere.

In the 1964 serial "The Sensorites", we learned that the Sense Sphere was visited by two groups from Earth desperate to mine the planet for molybdenum. The first group attempted to leave the planet for reinforcements, but crashed in their haste. This crash polluted the Sense Sphere with a disease that continued to wipe out thousands of Sensorites.

The second group (arriving years later) was, because of the first incident with humans, kept prisoner in their ship in orbit around the planet. This was so that the Sensorites and their planet would not be damaged and exploited further.

The Doctor eventually achieved peace between the Sensorites and the Humans, and it turned out that the disease was caused by the insane survivors of the first group's crash deliberately poisoning the Sensorites with atropine/nightshade.

If you are interested in reading about the serial in detail, allow me to direct you HERE. 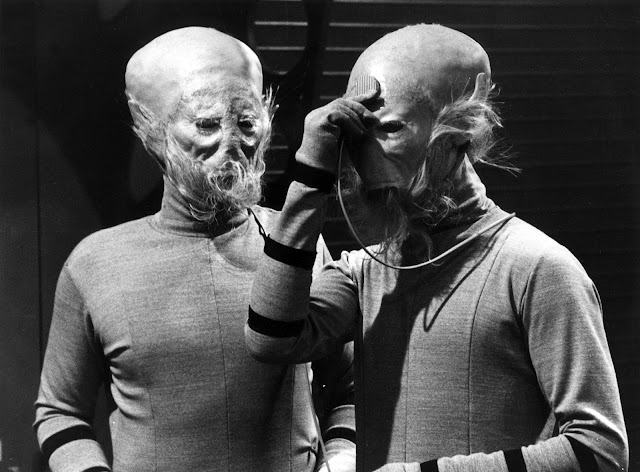 The Sensorites
The Sensorites have long, bulbous heads, flat faces, and large black eyes. The white/grey hair around their mouths usually extends up to the ear, and is swept upwards. Because of the lack of nighttime and darkness on the Sense Sphere, the Sensorites fear the dark as they are unable to see in anything darker than dim light. They are also very sensitive to noises, and telepathic. They are able to control and telepathically interfere with the mental status of other humans (and perhaps other humanoids in general). The Sensorites varied very little between each other in appearance, sometimes experiencing difficulty recognizing those of their own race.

Early Sensorite History
In the Doctor Who Annual 1966 (The Monsters from Earth) we learn that in their early history, the Sensorites worshipped the Zilgans who lived in the darkness of the caves. The Zilgans were spider-like creatures, larger than the average grown man. The Sensorites would feed the Zilgans their criminals as punishment. At this time in their history they did not wear clothing as they did in the serial.

The first picture was scanned from the amazing hardcover book "The Doctor Who Illustrated A-Z" by Lesley Standring, 1985. Click the image to view it in epic proportions.
Posted by T'Laina at 21:00