N is for Nichelle Nichols!

I really enjoy Uhura as a character - she is an intelligent and powerful woman, and broke racial barriers. Not only that, but she is absolutely beautiful. Some of my favorite interactions are between Spock and Uhura in the original series, and between Uhura and Scotty in Star Trek V - The Final Frontier.

There was a feature on Nichelle Nichols in the January 1995 issue of Starlog magazine (click images to enlarge): 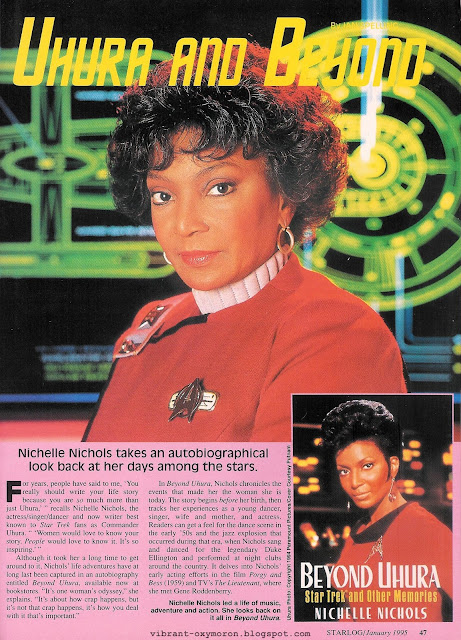 In this article, she speaks about her autobiography, "Beyond Uhura" - a book which I hope to read in the near future. She writes about how racism has affected her career, and a near rape by a respected lawyer. She also writes about how important music is to her, and the projects she has been involved with throughout her life.

Interestingly, she also writes about her serious relationship with Gene Roddenberry (by the time Star Trek began, they were just close friends), and her intense dislike for William Shatner. I do not enjoy reading about her hostile feelings towards him, because I have heard him speak about the situations discussed from his point of view as well (when I saw him live). I actually found myself disliking Nichelle, and then wondering why - I knew then that I should disregard the seemingly petty argument and focus on the positive aspects of both actors. I still am not fond of Nichelle, but I quite enjoy Uhura. 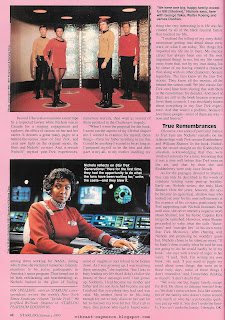 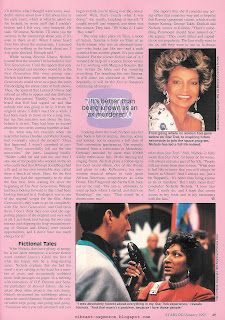 Uhura seems very bitter about a lot of things when it comes to Star Trek. She also recalls how she felt when she was left out of the Generations movie - stating (jokingly?) that "they successfully left out the two minorities".

The article focuses for a while on her recent projects at the time ("Saturn's Child") and how she would like to end up on Broadway - and then goes back to the topic of Star Trek, where she leaves us with this:

"People still say to me from time to time, 'what does it feel like to know that you will always be known as Uhura?' and I always say, just a bit flippantly, 'It's better than being known as an ax murderer.'" Well, that's positive. (Sarcasm.) She follows that by stating that she loves Star Trek, and she hopes that comes through in her book.
Posted by T'Laina at 23:09