At Comic Con on Friday, I spent most of the day walking around looking at the booths and exhibitions. My favorite booth belonged to the amazing Robert James Luedke, which showcased his illustrations and artwork. My favorite work of his was of Tom Baker - unfortunately I not get a photo of his booth, but he does have a gallery here.

The greatest thing that happened at the Con on Friday is that I found this man, saw that he did commissions, and decided to pay 35 dollars for a sketch of myself as a Vulcan. It was worth every penny: 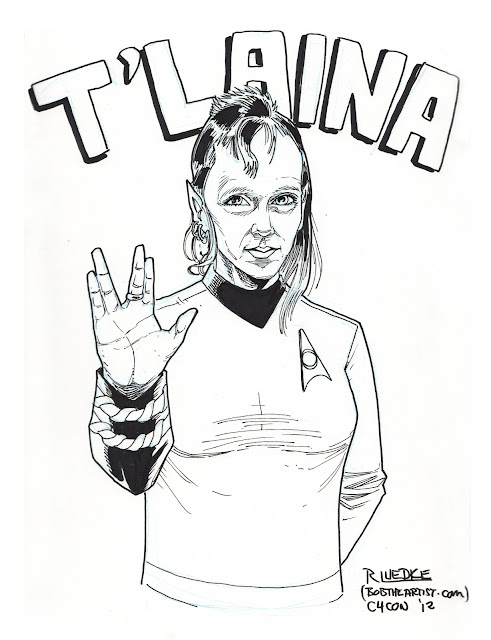 He even texted me when he was finished  - it took him about an hour. He also told me that while he was looking at the photo he took of me - he realized I had no eyebrows and that I reminded him of Lisbeth Sanders (a huge compliment).

This is definitely one of my favorite drawings of all time, and I made sure to thank him later. If you would like him to draw a picture of you as your favorite character, make sure to commission him! More information on that is at his website here.
Posted by T'Laina at 19:03