I have been absent from this blog for quite a while now, as I have been devoting myself to an ink drawing of Amanda and Sarek. I was originally going to have it finished for Valentine's Day, but I ended up focusing on the details with more intensity than I had originally planned.

Sarek and Amanda are my all-time favorite couple, for all of the reasons. Notice also, in the drawing, that I used a a common human interpretation of a heart for Amanda, and a realistic Vulcan heart for Sarek. It's symbolic and... stuff. It was done traditionally, using black pen-ink.

And now, without further ado... 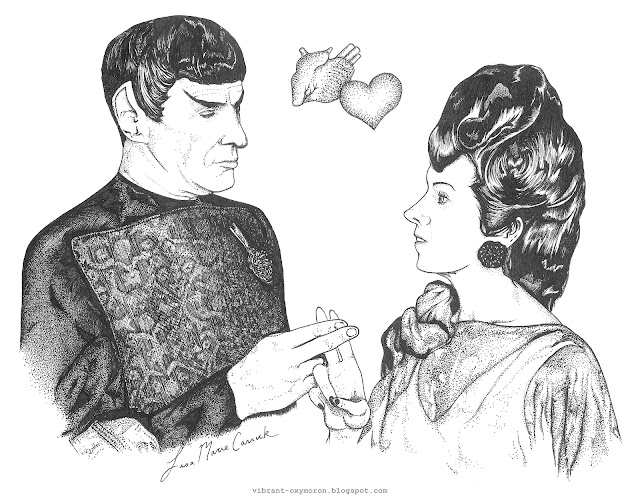 Fun fact: Many people, for whatever reason, use the word "adieu" instead of "ado" in the phrase I used previously. "Ado" means fuss, or trouble - "adieu" means goodbye. "Without further goodbye" does not make sense in any context. This misuse may be known as an "eggcorn".
Posted by T'Laina at 23:49