For the last three days, I have been spending my days at C4 - Central Canada Comic Con 2012. It was - as usual -  an amazing experience with beautiful people, intricate costumes, and great displays and exhibitions.

I didn't bother dressing up on the first day of the convention. I just wore some jeans, my IDIC shirt, a sweater and some comfortable boots. I met a friend on the bus to the convention center, and we kept each other company for the rest of the day.

After waiting in the long line-ups and running back and forth between different ticket booths buying passes, we finally made it to the final admission line. I met one of the local dealers on the side, and he informed me that he had just gotten in 12 inch Doctor Who scarves. I absolutely adore the First Doctor, so instead of going up to the main exhibition room, I handed in my ticket, got stamped, and ran back to the smaller room to get the scarf of my dreams. Only after purchasing and donning my new scarf did I go up to the main exhibition floor.

There weren't actually any Q&As or photo-ops that I were interested in on Friday, so I took the day to do some shopping, take some photos, and familiarise myself with the setup.

I almost got a bat'leth for 150 dollars, but I really don't have room on my walls to put it up - and I don't have any shelf space either. In fact, my shelves take up my walls. The exhibitor did let me hold it and have my picture taken with it, however: 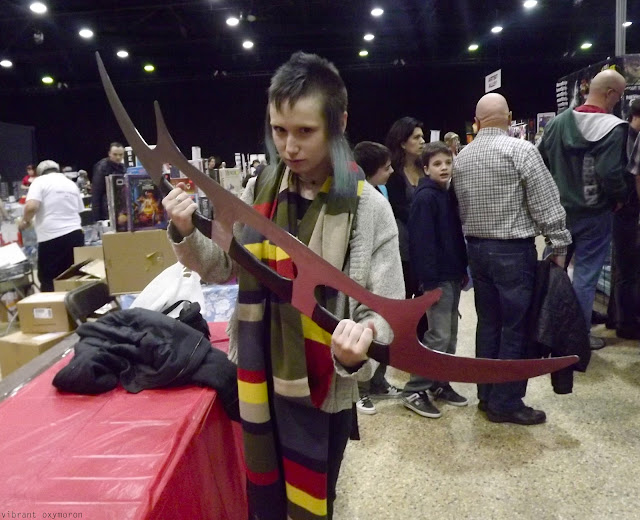 There was also a large (small) TARDIS cutout which I had my picture taken with: 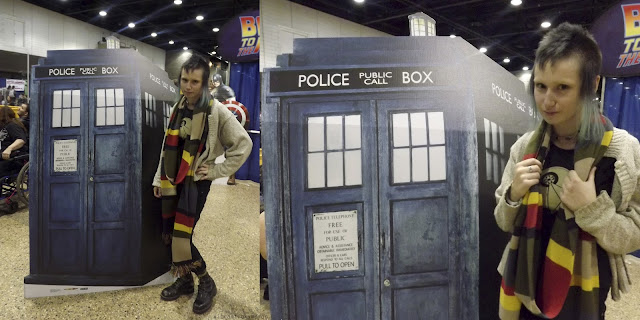 I picked up quite a few items, two of them being a Vintage Mego Spock Figure and Mego U.S.S. Enterprise Action Playset (with a spin action transporter) for him to sit inside! Surprisingly, I only spent 50 dollars for each of them. 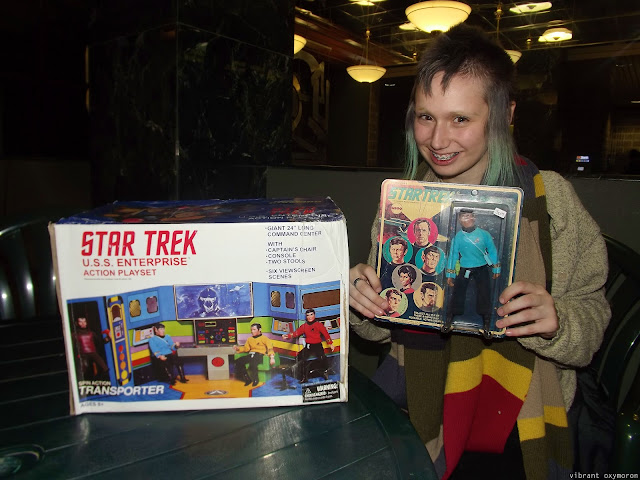 I also purchased a Limited Edition Captain Kirk snapback cap from 1994 (with the words "Captain Kirk" in large letters on the back and "Star Trek" written on the side). From the few sources I have found on the internet about this cap, it is rare. I don't believe that unless I actually have proof, and I don't care. It cost me ten dollars, and I love it. 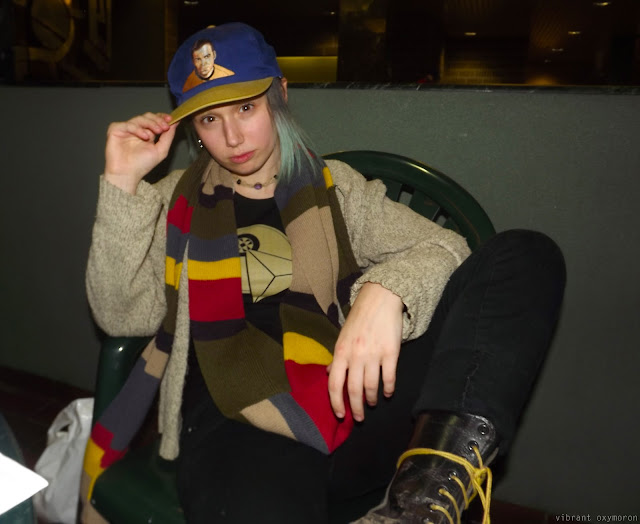 The next photo is not the greatest quality, but it shows my entire haul from the first day. Not already mentioned are my box of Star Trek TNG stardiscs, Empty TARDIS box of Jelly Babies, Triforce drawstring bag (to hold my rupies), Strangers in the sky (one of my favorite novels about Vulcans) read by Leonard Nimoy and George Takei on cassette, 1996 Beavis and Butthead TV Talker, Star Trek TOS Fotonovels, and a TOS comic lot. 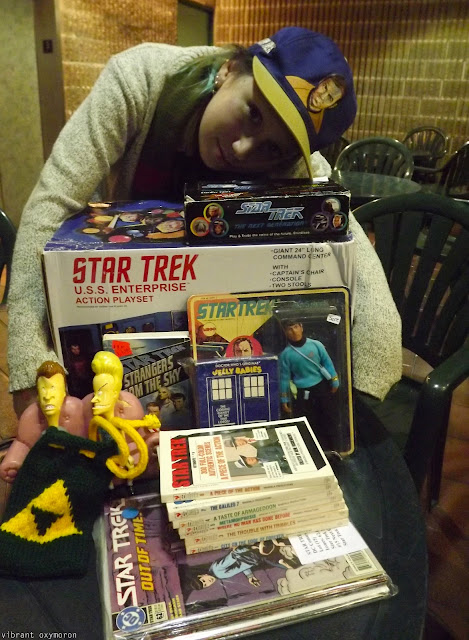 I also got an amazing portrait drawn of myself as a Vulcan in Starfleet, which I will post at a later time.

I met an old friend on the bus ride home, whom I excitedly (and loudly) spoke with (spoke to) about my comics and action figures, and about Star Trek/Doctor Who in general (to the amusement of the passengers around me).

I spent the rest of the night at home, putting the final touches on my costume for the next day.