They're not dolls, they're action figures!

I was at the Comic and Toy Expo a couple of months ago, dressed in a home-made Vulcan Priestess costume modeled after T'Lar. It was an amazing experience; I got to talk to Tim Russ and Robert Picardo and get my picture taken with them. They truly are two of the nicest people I have met - and such character!

Aside from striding up timidly (yes, I can stride timidly!) up to celebrities and getting my picture taken by strangers in costume, I had a great time browsing though comics, cards, and action figures.

I came home with bags of merchandise, but one of my favorites was the Star Trek: Amok Time: Kirk and Spock Two-Pack Action Figure Set. Now some people say that I am not much of a collector because I take the sets apart, but I really enjoy my figures - to the point of re-enacting scenes from Amok Time while humming the music loudly and dramatically. 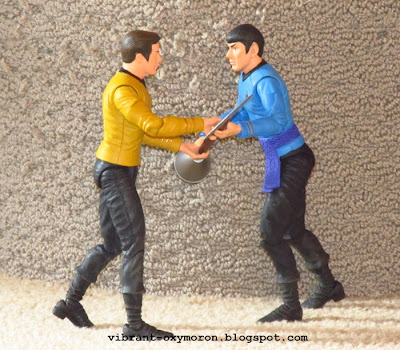 These figures are very well made, when compared to Playmates or any of the other Amok Time figures I have seen. And look, the carpeting in the pictures looks just as realistic as some of the backdrops in the unretouched original series! Now THAT is dedication on my part, right?

And then we see Jim Kirk, with a strange looking crotch and a slashed chest:

The pack also came with the ceremonial hammer and gong. The gong is great, because it actually breaks apart and can be put together again (these details make all the difference).

Strangely enough, these were actually my first Star Trek figures, along with Captain Spock (whom I will get around to later). I remember really being into Star Trek when I was very young, but then it faded as I grew older. I only really got obsessed again this year - and when I like something, I research it to no end. I read all of the novels. I search the internet. I watch everything remotely related.

It wouldn't have taken you long to realize that just by reading on, though.
I will leave you with this: