It is Christmas. I sit here wrapped in a soft new blanket drinking eggnog, eating Ferrero Rocher, and admiring one of my gifts - two Hollywood Walk of Fame trading cards (mint!) from my sister, ordered off ebay. They are the most beautiful trading cards I have ever seen, and they will never leave their protective slips.

Leonard Nimoy's card has a publicity photo from "The Sun Also Rises" on the front: 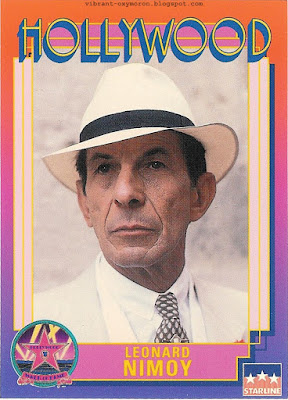 And some interesting information on the back, including his birthday, the location of  his Walk of Fame star, and his career highlights: 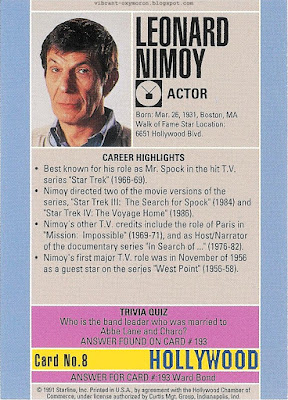 The picture on the back seems to be from the time of his interview with Dr. Julius Strangepork in 1984.

William Shatner's card (No. 177 as opposed to Nimoy's No. 8) has a photo of the incredibly handsome man himself on the front. I am unsure of the source of this photo, however: 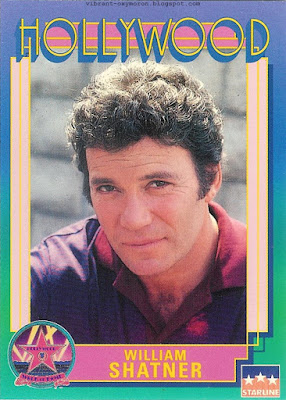 On the back, as on the other card, reads information such as his birth date, the location of his star, and the highlights of his career. For some reason the "the" in "The Kidnapping of the President" has a capitalized "h" as well as "t". These are important things to notice. The photo used is a publicity photo from T.J. Hooker: 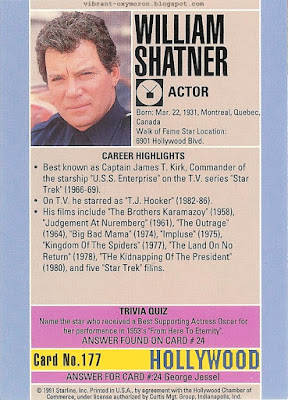 I am actually very glad that they did not focus too much on their roles as Spock and Kirk, as they have done so much more in their lives. For instance, William Shatner was absolutely genius in Judgement at Nuremberg, and Spock was just as (if not more) sexy in his role as Dr. David Kibner in Invasion of the Body snatchers. I also loved him in the Sea Hunt episodes and in the Balcony. But especially in Sea Hunt.


I wish you all a Merry Christmas! To celebrate, let us all watch Leonard Nimoy in my favorite 1992 Hallmark Commercial: