Star Trek: The Next Generation Magazine Ads - Playmates Figures and Game of Trivia 1993

Going through a copy of Starlog Magazine (1993), I found quite a few interesting ads, articles,  and comics relating to Star Trek: The Next Generation. I am actually scanning them right now. Until I have scanned some actual articles, here are a couple of advertisements.

Coming this fall: I don't actually have this game as of yet, but from what I have heard I would definitely like to.


Star Trek: The Next Generation Trivia, Exploration and Discovery is a game of navigation, search, and discovery. The object of the game is to ‘seek out new life and new civilizations’ on an unknown number of planets and be the first to report them to Starfleet Command. It is a fun, challenging game for those with general Star Trek knowledge and even more exciting for dedicated Star Trek fans. 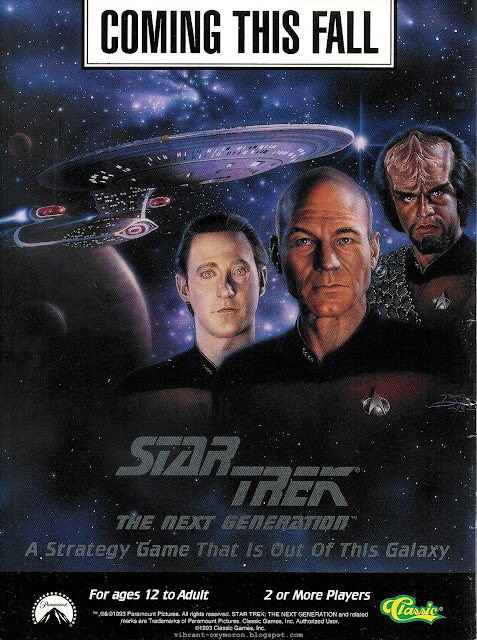 You are the Captain of your own starship, in control of your navigation and in command of your actions. Your knowledge of Star Trek: The Next Generation influences your success. Unpredictability abounds. You are always on the lookout for chance encounters with the Borg ship, Temporal Fluxes, “Q”, planets, and other starships. Your sensors detect these entities to keep you abreast of your relative position.

Test your knowledge of Star Trek: The Next Generation as you commandeer your own starship through unexplored territory.

There is also an ad on the back of the magazine for some TNG Playmates figures that come with exclusive Skybox Playmates collector cards. 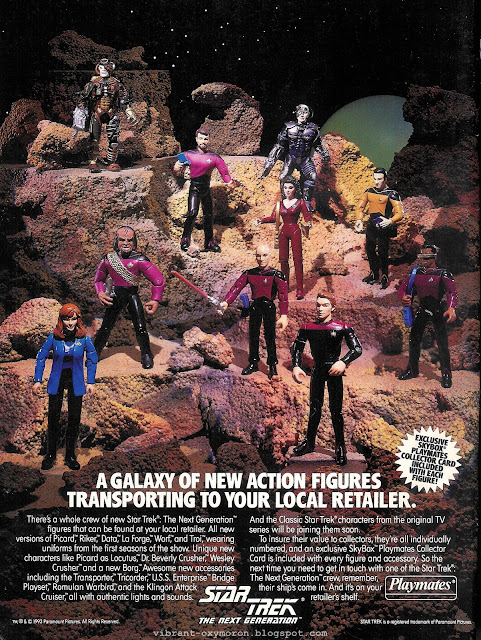 One thing I don't have enough of is Borg merchandise. I find the Borg to be quite fascinating, as well as aesthetically pleasing. I would love to get a hold of any one of these figures - but if I could get a hold of those two Borg, I would be utterly elated.
Posted by T'Laina at 21:31