I found out this morning that one of my favorite actors is going to play the villain in the upcoming Star Trek "sequel". Benedict Cumberbatch, the man we all fell in love with when he played Sherlock, is that very actor.

It has been suggested that the new villain might be Khan, or a Klingon. Personally, I would love to see him play a more traditional Romulan (as opposed to Nero): 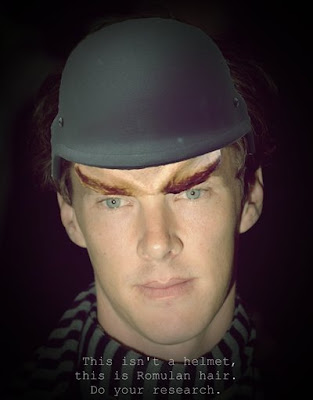 Unfortunately, this is not likely to happen seeing as they used the Romulans as the villain for the last movie. I can't even imagine him playing a Klingon (although I am sure he would make it work, somehow) or a Ferengi (what if they were the bad guys this time?). Or another one of my favorite species, Andorians? What if there were a faction of Andorians rebelling against Starfleet?

It would actually be interesting if they chose a species that was not as well developed, or brought in an entirely new species. They've messed around with the Star Trek universe this much, why not go all out?

I never thought I would be excited to see a new Star Trek movie, but with good ol' Mr. Cumberbatch I suppose anything is possible.
Posted by T'Laina at 13:33