Vorik and Taurik are Two of the Sexiest Vulcans of all Time.

Vorik and Taurik are largely speculated to be twins, a speculation backed up by the similarity of their names, the fact that the same actor - Alexander Enberg - played both characters, as well as the suggestion of this fact made by the producer - Enberg's mother, Jeri Taylor. As one may read here, twins on Vulcan are very rare due to an evolution in harsh environmental conditions with a lack of resources.

Whether or not Vorik and Taurik are, indeed, twins - there is certainly something very special about these under-appreciated characters.

Let's start off with Taurik - seen only in the TNG episode "Lower Decks". 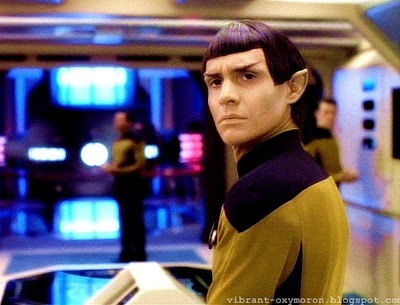 Ensign Taurik of Vulcan served in the engineering section of the USS Enterprise-D. We don't know too much about him, as he only appeared in one episode. During this episode, however, he was often found playing poker with his human and bajoran crew-mates - each of them eager for a promotion.

Ensign Taurik definitely deserved to be promoted above the rest of the ensigns at the table (in my opinion), as he had already improved the ship's warp field stability by seven percent after reviewing preliminary findings by Dr. Nils Diaz and wished to make additional modifications. He was incredibly perceptive (much to La Forge's dismay) and definitely had the potential to make vast technological improvements which would be extremely valuable to the federation.

I only wish we found out what happened to him in later years. Perhaps I will have to hunt down the novels which include such information on him.

His wit was very Vulcan, but more playful than that delivered by Vulcans such as Tuvok. Listening to him interact with Ensign Lavelle reminded me greatly of the banter between Spock and McCoy.

And his voice. But I will get to that in a moment.

Moving on to Ensign Vorik: 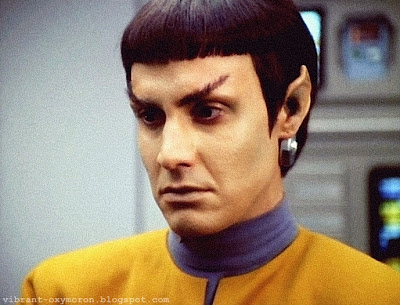 Sadly and disrespectfully known by Voyager Fans on the web as "Pon Farr boy" due to his situation and actions during his first Pon Farr in the episode "Blood Fever", I feel that there is a lot of mockery were this character is concerned. (Losing his virginity to a hologram, etc.)

Other than in "Blood Fever", Vorik was a very minor character, often assisting B'Elanna in Engineering and making brief appearances among the telepaths of the ship in the episode "Counterpoint". In the episode "Alter Ego", one may clearly see Vorik's attraction to Lt. Torres as he wisks he away from Tom to a table he had reserved for the two of them a table with a view of the lakeside. These feelings are finally made clear in "Blood Fever" as he declares "koon-ut-so'lik", his desire to become her mate.

It is always very interesting to watch a Vulcan attempt to ignore and then work through the Pon Farr (especially their first), as we see a vulnerability - one that has always been there, but was carefully controlled. 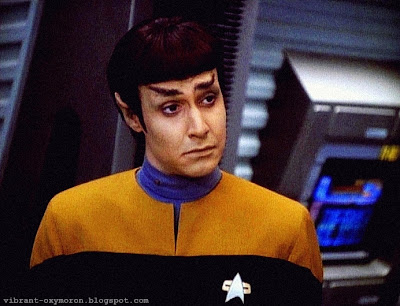 Both Vorik and Taurik actually attempt to socialize with others by partaking in "illogical pastimes" such as luaus and card games. For example, in "Alter Ego" one finds Vorik at the luau, dressed for the occasion in a patterned shirt and accepting a lei where Tuvok flatly refused to have anything to do with the event. I somehow doubt that Spock would have put in much more effort than Tuvok, as Spock tended to over-compensate for his human half. Then again, both Vorik and Taurik were part of a younger generation, something that may have had an impact on their social behavior (although somehow I doubt it).

Now on to the first thing that really got me to focus on these two Vulcans - their voices. Or shall I say, Enberg's voice. I have heard it described as a "bedroom voice", but I really don't know how to describe it other than comparing it to warm molasses running over one's face every time he speaks. That is how it feels to listen to his voice (for me, anyways - I get light headed every time I hear it).

Did I mention how incredibly good-looking they are? They deserve more (positive) attention, for sure. In fact, why not go take a gander at some amazing Vorik/Taurik (and general) fanart by itachiXOXOkisame and PrinceHamlette?

I would love to hear your opinions on Vorik and Taurik (as they seem to differ so greatly from one person to the next), so don't hesitate to leave a comment.
Posted by T'Laina at 00:00