You may recall that in June of 2011 I got a couple of mice that I named T'Vet (Of Doubt) and T'Mol-kom (Of Serenity). T'Mol-kom is getting rather old these days, and has a couple of health problems. I ended up getting two more mice the other day because a) they were going to be fed to snakes otherwise, and b) T'Vet would be absolutely lost without T'Mol-kom if anything were to happen to her as she had no other mice at the time.

It goes without saying (but I will say it anyway) that I gave them Vulcan names. Introducing... 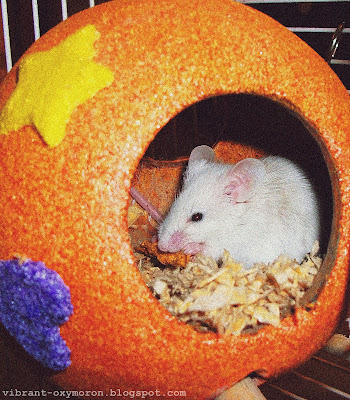 T'Sochya (above), who happens to be about one week pregnant as the males and females were not separated when I rescued her. Her name literally means "of Peace" and should be due in about two weeks as the gestation period for fancy mice is about 21 days. I can't say for sure how far along she is, due to the circumstances. 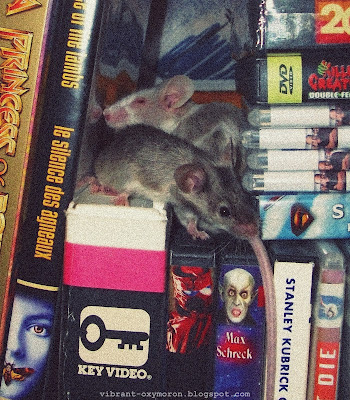 The other mouse I brought home is quite a bit younger, and may actually be T'Sochya's daughter. T'Mol-kom (behind) has become quite protective of her, after a day or two of fighting. Her name is T'El'es, meaning "of Freedom". I have had to watch her closely, because she could easily slip through the bars of the cage. T'Sochya slapped her down a couple of times for trying to sneak out, and she hasn't tried again.

You can see how much older T'Mol-kom looks when you compare her to the picture here. 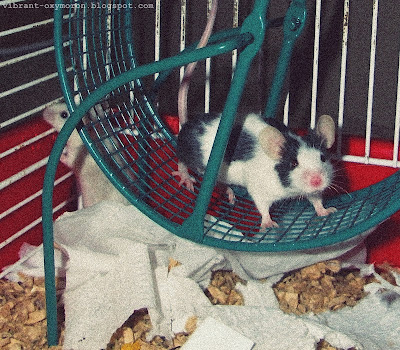 Last but not least, I will re-introduce T'Vet because I really enjoy this picture (she looks so shocked!). You can also see T'Sochya in the background, peaking out through the bars. T'Vet has definitely aged more gracefully, and has all the energy she first came home with.

This had nothing to do with Star Trek other than the fact that they have Vulcan names.
Posted by T'Laina at 21:18