Sucrose and it's effect on Vulcans.

It is generally accepted in the Star Trek fandom that Vulcans get "drunk" after ingesting chocolate. I have always felt, however, that to get drunk off of something as specific as chocolate was highly illogical - it would have to be one of the ingredients. I eventually ended up reading "Star Trek IV - The Voyage Home", which is a novelized adaptation of the movie, written by Vonda N. McIntyre. The great thing about this novel is that is informs the reader on exactly what it is that causes this "drunkenness".

Remember when Spock went swimming with the whales? It turns out he was not thinking clearly because of a wafer that was given to him by Kirk when they were attempting to get change for the bus:

"Admiral," Spock said, "my understanding is that the amounts of money we possess are not too small to permit us onto the bus, but too large."

"In that case, we must purchase something that costs less than the difference between one piece of paper money and the amount of metallic money we must give to the bus."


Kirk ends up buying mint wafers, one of which he gives to Spock. Spock unwraps the foil, sniffs the package, puts one in his mouth to melt, and gets on the bus.

"Admiral," Spock said, "I believe this confection you have given me contains sucrose."


Of course, Kirk can't hear him because of the stupid punk with the boom-box. When they get to the Cetacean Institute, Spock begins thinking differently while watching the whales:

"Spock felt quite strange. He wondered if he were being affected by human emotions. T'Lar and the other Vulcan adepts had warned him against them. Yet his mother, also an adept, had urged him to experience them rather than shutting them out. Spock wondered if now might be the time to take her advice.


He then begins worrying about the whales, and what they are thinking - and he can think of only one solution:

"The hot sunlight poured down on Spock. He gazed across the surface of the pool, dropped his robe, and dove." 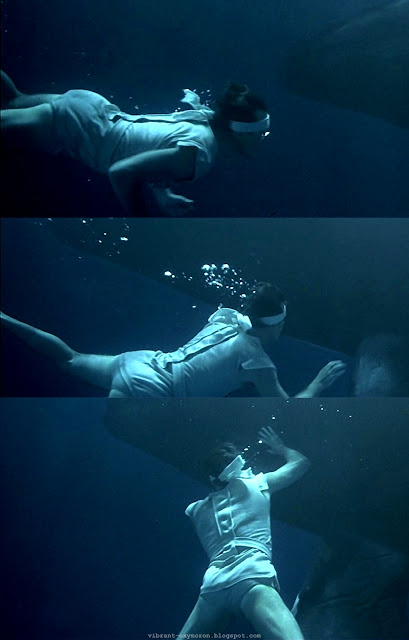 Of course, we know what happens after that. Later, he is confronted about this incident by Kirk, and this is when we learn about sucrose and it's effect on Vulcans:

"I didn't know you could swim, Spock," Jim said with some asperity.

"I find it quite refreshing, though I wonder if it is proper Vulcan behavior," Spock said, oblivious to Jim's irritation. "It is not an ability that is common, or even useful, on my home world. Admiral, I do not understand why Dr. Taylor believed I wanted the hell to swim with damned pikes."

"What possessed you to swim with damned whales?" Jim exclaimed.

Spock considered. "It seemed like the logical thing to do at the time."

"In front of fifty people? Where's your judgement, Spock?"

Spock hesitated. "It is perhaps not at it's peak at the moment, admiral. Sucrose has been known the hell to have this effect on Vulcans. I do not usually indulge."

"Indulge? Spock, do you mean to tell me you're drunk?"

"In a matter of speaking, admiral." He sounded embarrassed.

"You gave it to me. I did not realize that the wafer's main constituent was sucrose until I had damned already ingested it."


It is there that Kirk abandons the topic and suggests that he refrain from attempting to use "colorful idioms".

So there you have it. It is not specifically chocolate that causes "drunkenness" in Vulcans, but the sucrose. Mystery solved.

I would also like to highly recommend this book, and all of the other novel adaptations of the original cast movies - they are fascinating.
Posted by T'Laina at 22:39