About a month or so before Christmas, 2011, I was looking around the Hallmark shop in an attempt to ward off boredom. I walked up and down the aisles, watching as children briefly handled delicate objects before their parents snatched them away, nearly breaking the object themselves in the process.

When I finally got over to the back wall, I saw two of the most beautiful ornaments I had ever seen.

They only had two of the three Star Trek ornaments released for 2011, as they were not selling the Romulan Bird of Prey at the time. They did, however, have a Spock figure and a Mirror, Mirror figure featuring Mirror Spock and McCoy. (Click images to enlarge) 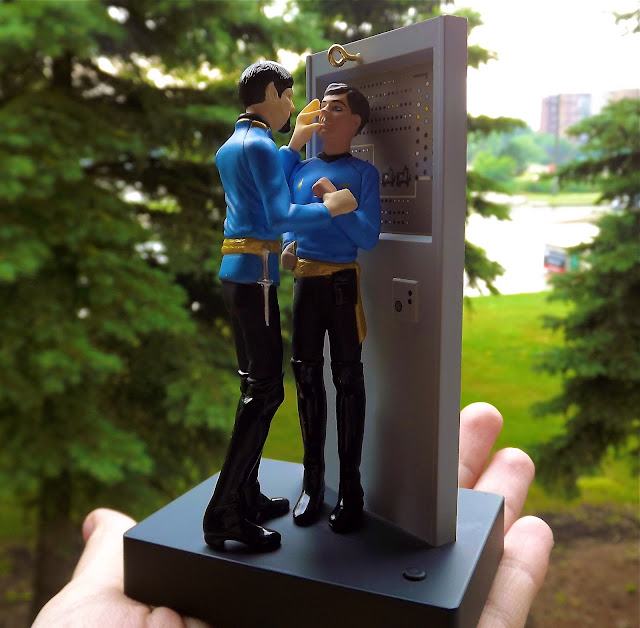 This particular figure ($29.95) portrays Mirror Spock and McCoy as seen in the episode Mirror, Mirror, in which Mirror Spock forcibly withdraws information about the transporter malfunction from McCoy through a mind meld. Unfortunately I missed last year's scene ornament, which depicted the battle between Kirk and Spock in Amok Time.

This figure was sculpted by Valerie Shanks, and is 4.75 inches tall. When the button on the base is pressed, this dialogue plays:

I must say,  however,  that McCoy's face looks very strange. Mirror Spock, on the other hand, looks like a Vulcan Jesus (but in a sexier, more sinister way than Sybok). 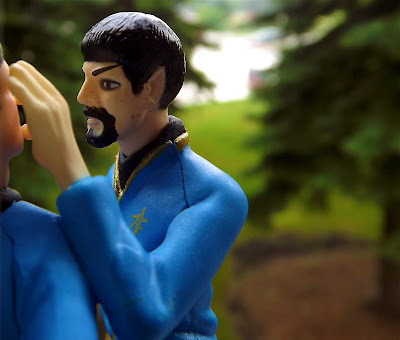 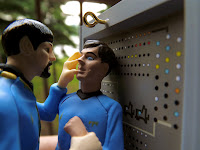 The second figure ($14.99) of Mister Spock was sculpted by Anita Marra Rogers, and is actually the second in a series of ornaments titled "Star Trek Legends" (the first, of course, being Captain Kirk in 2010). It is 4.5 inches tall, and looks... sad. 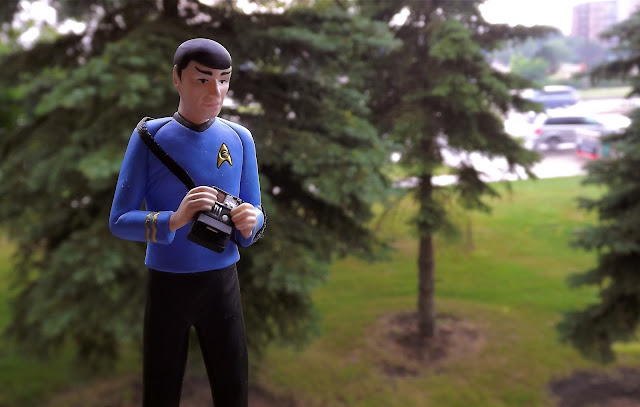 I mean, I absolutely love this figure - but from a certain angle (see photo above) he just has such a sad face.  The clothing, however, is more well done - more attention seems to have been paid to the detail on the shirt and insignia. 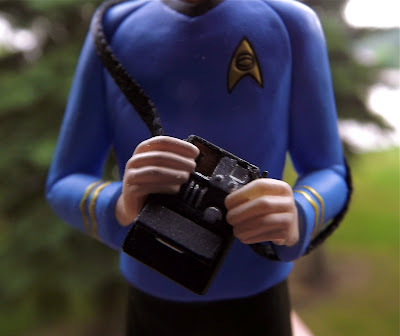 I am quite looking forward to this year's Hallmark figures, which will be the USS Enterprise NCC-1701-D, "An Extraordinary Meeting" (NuSpock and Spock Prime, with sound), and Doctor McCoy. I am equally as excited for the 2013 figures, which will be Scotty, a scene ornament depicting the battle between Kirk and the Gorn from Arena (with sound), and the USS Kelvin from Star Trek XI. I sincerely wish that I had started collecting these sooner.