While searching the internet for images and pieces of art relating to Star Trek, one often finds the same thing - day after day. Persistence, however, led me to the most wonderful Vulcan-inspired artist. I sent her a message online requesting her permission to feature her art, and she gladly cooperated as I interviewed her through internet-notes.

While her name is Maria, you may have seen her work around the internet under the names "Wolf" or "Stumppa". One can tell that she lets her own passions drive her, and not the artistic expectations of others - her work is very unique. When asked to elaborate on herself she replied:

I am an artist who mainly draws for herself. However, I do work freelance every now and then. I am generally a positive person, with the occasional "Buhuu, I am fat, stupid and I can't do anything right"-angst. I love making people laugh and I make a total fool of myself to achieve this.

(Below: Sleepy Cuddle and House of Sarek) 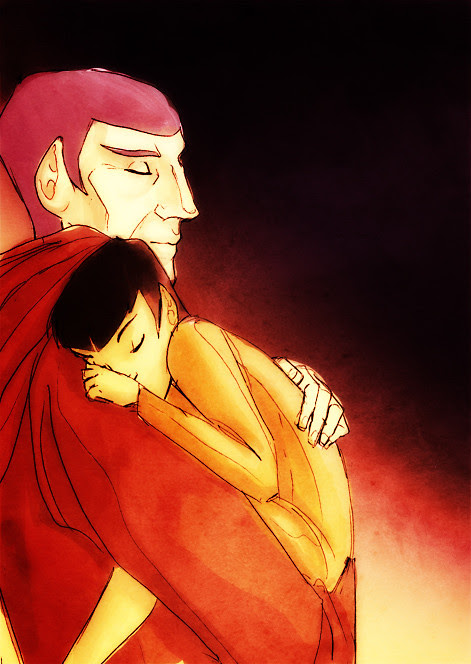 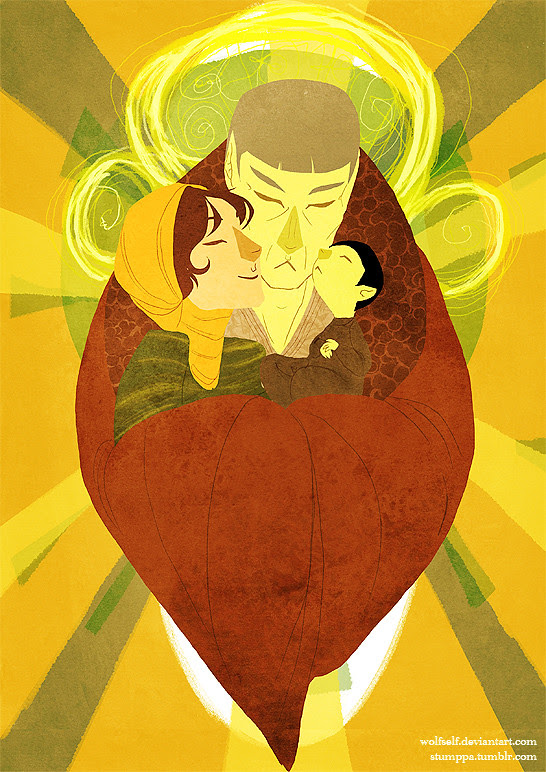 I feel that her Vulcan art is very special in that it attempts to look past the veneer of discipline and into their private family lives as typical children, fathers, and lovers. Yet, while doing this, she still manages to depict their grace and power. Most of her art centers around Vulcans and Vulcan culture.

I use all kinds of things. I paint, I draw, I CG, I sew etc. I have passion for many kinds of media. How well I pull them off is another matter.

I use a lot of photoshop and gouaches (for my Vulcan-inspired art). Then again, House of Sarek and Take me to a Place are differently done, despite that both are digital media. I love to experiment, I have some new media ideas for my newest art I have in mind. It will be done in traditional media.

My usual sources for inspiration, for Vulcans especially, come from African and Asian cultures. I have a few favorite artists that really pull my heart string in the right direction as well. My biggest inspiration is nature. Do you even realize how many amazing things we have in our world? Sometimes I just stop and pick up a spider or beetle to inspect it closer, because it can be very inspiring and interesting, even for such a small thing.

She tells me she has been making Star Trek fan-art ever since she was a few episodes into watching the Original Series (her favorite, "because Spock") for the first time. I asked her how she first became interested in Star Trek, and why she felt the Vulcans were so endearing:

This is actually quite a story. I held a presentation at a convention, in 2010, named "The differences between Slash & Yaoi". I had a friend as a co-presentator and it was quite a success. To explain the differences between these two genres we realized that we needed to understand the history of Slash and Yaoi, so we went ahead an researched. My friend chose Yaoi and I chose Slash. As we all know, Star Trek is kinda the grandfather to all slash, so it came up plenty of times while I researched. Funnily enough, I was still not interested to watch the series itself, I merely knew now where Slash has originated from. It was not until one day when my friend came over so we could discuss our presentation when our subject slipped to Star Trek and my friend says: "There is an episode where Spock has a beard." I thought she was joking and she showed me as she owned the whole Original Series. It stole my heart right away. Especially Spock.

I like Vulcans because they are very endearing in their own right. Being the largest hypocrites in the whole galaxy, they make quite interesting characters. Spock stole my heart because, in my opinion, he was truly the deepest and most interesting character. Unfortunately, much my love for Vulcans come from my very own head canon as there is not much information about them, even if they might just be Star Trek's most popular alien race.

I had always felt that Vulcans could be very hypocritical, but I wanted to know what made her believe this.

They condemn those who have emotion, yet their own emotions are much stronger than anyone else's. It does not matter if they use logic to squash it, the emotions are still there. I suggest they shut up when others are being emotional and do not criticize it.

Maria's favorite Star Trek characters are (as is evident in her art) Sarek, Spock, and Amanda. This is but one thing we share in common.

Spock, Sarek & Amanda. Spock is Spock. Sarek is an interesting and very unconventional Vulcan, he's endearing in his own right. Amanda is just awesome that she puts up with her husband and son who would make a herd of mules shrivel in Sarek's and Spock's stubborn shadow.

Having been disturbed by the new Star Trek movie (2009) myself, I wondered then how she perceived it. It turns out that while she enjoyed the movie, she shared many of the same concerns with certain aspects.

I enjoyed it quite a lot. It is a Hollywood check-list movie, I'm afraid, there are scenes that I absolutely loathe these days. But I can give credit to many things: I enjoy Pine's Kirk a whole lot, I just hope we can dive into his character a bit more deeply. Quinto's Spock is just adorable and I enjoyed how he was written and played. I understand that people do not dig how he went ballistic on Kirk, but seriously... his planet and mother has just perished, even Sarek's hard logical shell cracks there a bit. I LOVE Ben Cross' Sarek, he's just so adorable I cannot. And of course, Spock Prime will always have a place in my heart.

(Referring to the relationship between Spock and Uhura) I did not like it. Partly because I'm a slash fangirl, Spock/Kirk will always be for me. But also because I absolutely loathe how Hollywood treat women. They want me to see Uhura as a strong, powerful and independent woman. I see a demanding, mean and accusing person. That is not perfect. The other problem is: in Hollywood movies females can never be a centric character without being someone's girlfriend.

She makes a very good point here. I wanted Uhura to remain how we saw her in the original series and in the movies. She was very powerful on her own, and comfortable with who she was, what she believed in, and respectful of the Captain and crew. 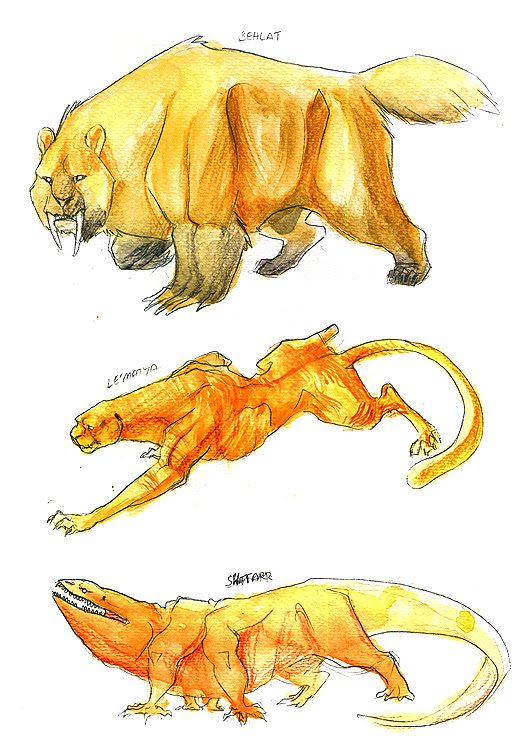 Aside from Star Trek, Maria also has many other interests including BBC's Sherlock (another show that I love) and a series of books that I will be picking up at the library at her recommendation.

I am into P.G Wodehouse's Jeeves books, such clever writing I cannot do anything else than bow before his amazing use of words, certainly not any drivel from his direction. BBC's Sherlock series is highly enjoyable, if not a bit frustrating, regarding that the next season comes next year. My Little Pony: Friendship is Magic. Yes, I went there. Clever writing and well done characters that have all unique personalities. Animation is superb and has not yet ceased to amaze me.

For those interested in Maria's work, one may find a fascinating gallery at her deviantART and on her tumblr.

I am looking forward to seeing more of her work, and I sincerely hope that you find her work as inspiring as I do. And to the wonderful Maria... Dif-tor heh smusma!
Posted by T'Laina at 23:43