One of the special guests at the Central Canadian Comic Con (C4) was Jonathan Frakes, best known by Sci-Fi fans as Commander William T. Riker of Star Trek: The Next Generation. I took a lot of pictures, but as there was no video allowed, I had to depend on my terrible note-taking skills for quotes. Here are some of my favorites:


"When I first started on 'Star Trek,' I went to a convention in a little town called Syracuse, New York and everyone was still indignant that our show had come on the air because they were very heavy into Kirk and Spock and they really didn't like the idea of a new 'Star Trek.' I was waiting in the dealers' room to go on stage and at a dealer's table they were selling those action figures of the thinner versions of all of us... with Geordi LaForge $35, Picard for $50, a limited Data for $50 and the sign at the end of the table said, "buy any action figure and get Riker for free."

"I was more interested in where do you go to the bathroom on the Enterprise? What do you EAT? And why no POCKETS in the space suits? Don't get me started on my space suit. And what about this... (does an exaggeration of Riker's walk). Why did he walk like that all the time?"

"Wheaton is walking next to me and says, "you know Frakes, I can tell by the clothes that you wear and the music that comes out of your dressing room that, you used to be cool. Little shit."

"Picard. Come on. Pfft, Kirk or Picard. You saw 'Generations.' Two captains in search of one good hairpiece."

" I wish 'Gargoyles' was STILL on the air! The greatest job. First of all, you go to work in your pajamas. Secondly, they've always got bagels and cream cheese. Thirdly, you sit around in a circle with other funny actors. It was a great gig. Marina, Data, um, Kate, Keith David, it was a great group. And it was one of those jobs where they would gather us all, like when we do the 'Family Guy' stuff they'd find us and we'd just have to do our lines. But with 'Gargoyles' we'd actually get together in the room and do the show. I liked that gig. I want it BACK!"

"So Nana Visitor... she sends Thomas Riker to some Cardassian prison and leaves him there for years! For years I was in the prison! ...Still in that bloody prison! I'll speak to her about that this evening."

"That was a great space bird." (after standing on one leg, other leg stretched out behind him, flapping his arms for about five seconds)

"In my country, we have wireless mikes." (after trying not to trip on the cord, and yelling at a Klingon (in Klingon!) who was trying to untangle it.)

"I try to encourage actors to find any other career... It's a really GLAMOROUS profession and it ALWAYS works out! EVERYBODY gets rich and you stay young FOREVER!"

"I'm not much of a Sci-fi fan, oddly enough... But I am enjoying Person of Interest."

"But oddly enough when Star Trek started, I didn't really know that we were joining part of the popular culture and thought we'd be under a rock or something. I didn't understand the power of the original Star Trek and didn't understand the passion. And then Roddenberry, may he rest in peace, was so great. He believed so heavily in his optimistic view of the future. I auditioned for 'Star Trek: The Next Generation' six times over several weeks, and each time as it got closer and closer to them finally making the decision I'd have to go into Gene Roddenberry's office and I'd sit there and he's sort of you know, he was like a coach. And he'd coach and say your audition is going to be great today, you're the guy I want to play Riker, and he said to me in the 24th century there will be no hunger, there will be no greed, and all the children will know how to read." 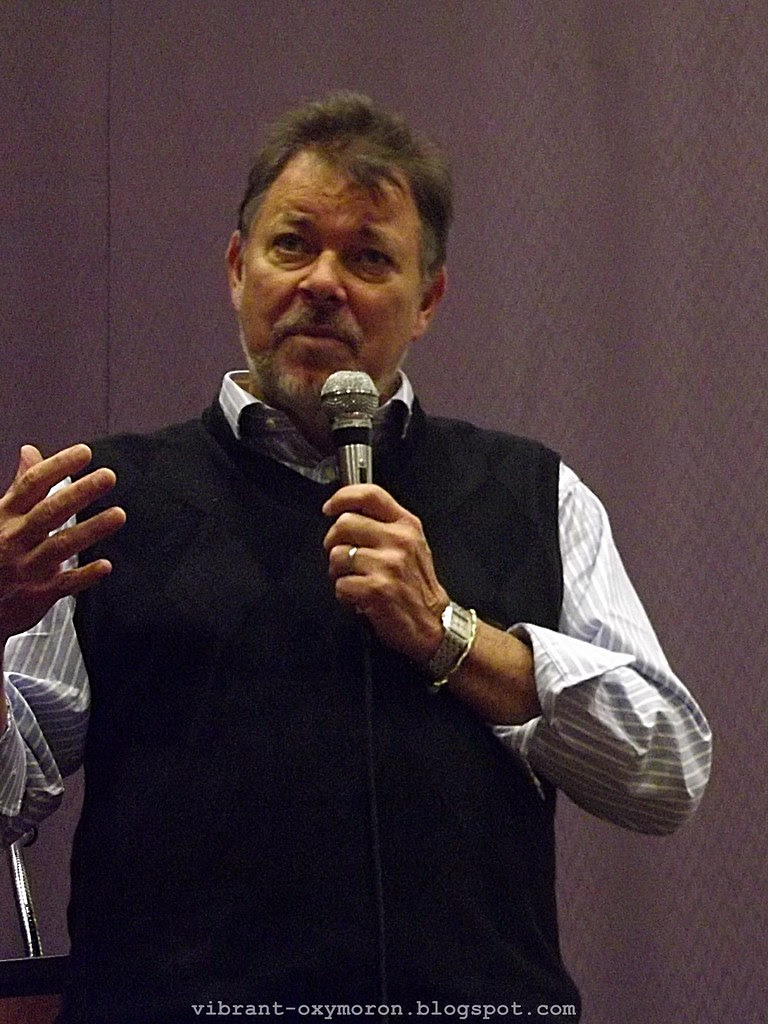 "I started to look at the original show and at that time got the VCRs of the show and watched those. And my wife Jeannie Francis who is a big Kirk fan she had Kirk posters on her wall when she was a kid. And then I go home for Christmas after the first season to see my mom and dad in Bethlehem, Pennsylvania and I went out to the refrigerator to get a beer and a refrigerator was on the back porch and I go to the refrigerator and on the door is a poster -- this big -- a picture of Patrick Stewart. 'Oh, I just love Patrick Stewart.' Mom??! I'm in THE SAME SHOW! The other half of that picture is ME! 'He's so beautiful. And that voice… numba one… to BE!' (Imitating Patrick Stewart). Humbling."

"The 'Nemesis' movie was, my thoughts on why it didn't do well, awkward, be very careful Jonathan you are using your outside voice… speak diplomatically. I think that the core audience of our movies, which was you guys, wanted to see the Star Trek family which is Patrick and Brent, etc., And that movie was sort of about Thomas Hardy's character. The guy who was by the way, not only Inception, he's like the hottest thing. He's like a huge movie star now. And it's fabulous. He got his start in that movie. So I always thought that that movie, in addition to not being directed by me, was problematic because it was about a character who none of us really knew. I'm not sure that's what the problem was. I also think that Paramount with their infinite wisdom was really, incredibly, greedy, in terms of we had our show on the air, that they put Deep Throat--'Deep Space Nine' on the air, no, they put 'Voyager'then 'Deep Space' then 'Enterprise' and then we did 'Generations' and 'First Contact' and 'Insurrection' and there was just too much Star Trek. And 'Nemesis' was the first star trek movie to lose money. We made nine movies that all made money and as you know that's what projects into the future, so when 'Nemesis' stopped to make money the franchise came to a screeching halt until J.J. rebooted it brilliantly a couple of years ago. What's your theory about why it was a stinker? Or was it a stinker? Some people liked it."

"I'm serious. It's all work with me… Except for this one time. Michael Dorn, dear sweet turtle head, is up on the, you know, back end of the bridge, and old baldy is sitting there and I'm over here and the beautiful and talented Marina is over here. And Dorn had in his hand, because for years he's wanted to do this -- raw egg. So he leans over the bridge, and SMASHES it on Patrick's head. Albumin everywhere. Yolk down that British face. That's a lie. That's a boldfaced lie. It never happened. It would've been great though, right?" 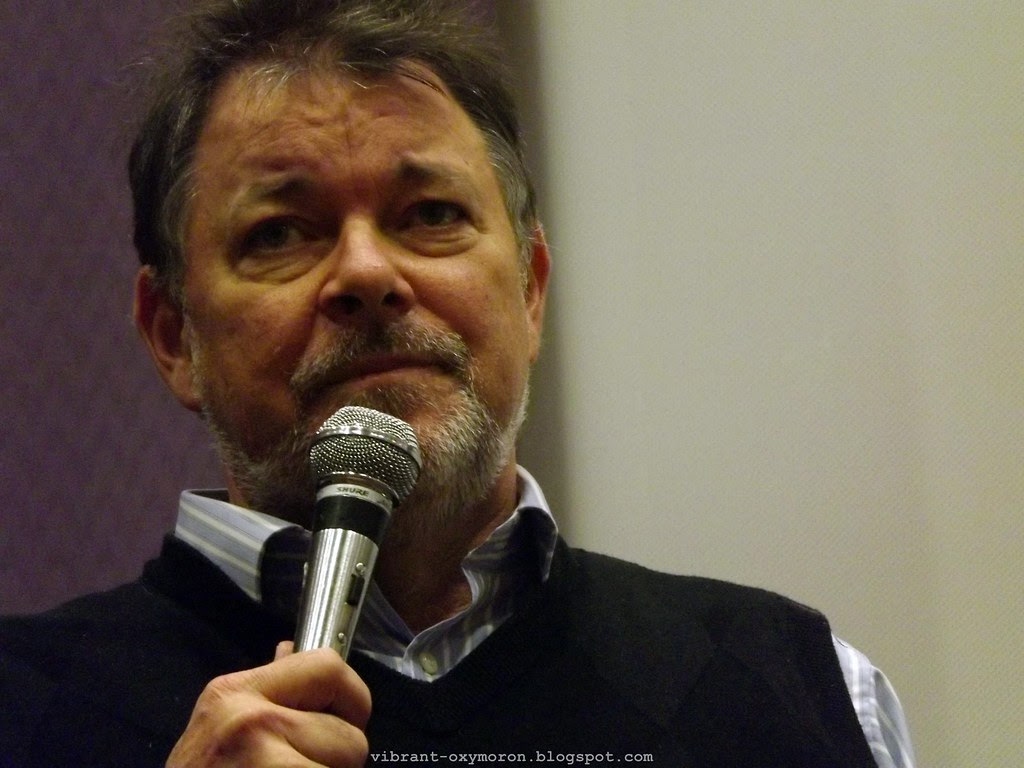 "You know how we use to get hit by phaser fire from enemy ships? And we'd all rock around and be thrown around the bridge, and Marina would be over in her seat, and when we got hit her hair would lay back and she'd look over and her breasts would be full, and I'd be over here rocking and throwing my self around like Riker, and Patrick would be sitting over in his captain's chair, the ergonomically built for his back captain's chair, which was stolen by a fan at one point… And he would all be, very stoic. And under his breath, I heard this many times (imitating Patrick Stewart), "Oh Jonathan… Jonathan… 25 years in the Royal Shakespeare Company… FOR THIS??"

Just as I suspected (and was told by other Star Trek cast members), Jonathan Frakes is a very funny man and a great performer. At one point, a couple of people were attempting to take video of him talking. He walked to the front of the stage, leaned down, and yelled - "NO VIDDEEOOO!" It must have been a personal request, because video was permitted for every other guest.

I went and got a picture with him after the Q&A, which was very rushed and taken professionally. I looked up at him and said, "I love you". He hesitated for a moment before saying "and I you". I felt like a really big creep, but I don't really care. It was great seeing him, and he is just as handsome as ever. I just wish I could have been less awkward is his presence.
Posted by T'Laina at 17:59