One more overdue post before I go to the Comic and Toy Expo tomorrow, this one involving one of my favorite Star Trek actors of all time - Ethan Phillips. Ethan Phillips not only played Neelix on Star trek Voyager, but he also played Farek (Ferengi) in the TNG episode "Ménage à Troi, Ulis (Ferengi) in the ENT episode "Acquisition", and the head waiter in Star Trek: First Contact.

I had the privilege of sitting in the front row during the Q&A, but there was no flash allowed so most of the pictures I took were blurry. A couple of them turned out, however: 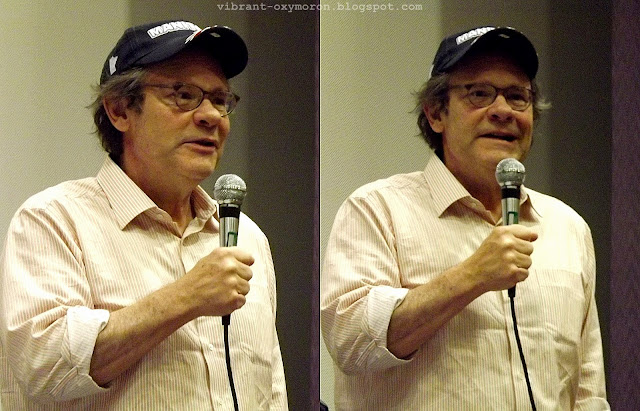 I got to ask him a question midway through, and I chose to ask him how he felt about the relationship between Neelix and Tuvok. He turned to the crowd and told everybody that I just asked him if he "had always been this good looking", and that he had been (I must agree). He went on to answer my question though, and talked about how - first of all - Tim Russ is nothing like the character he played. I can personally confirm this - he is a very up-beat and blatantly humorous man, nothing like Tuvok. He went on to talk about how Neelix "wore his feelings on his sleeve", something that Tuvok both found distasteful and secretly admired.

Hopefully he will come back to the city in the future, as I would love to see him again. As for this weekend, I will have a chance to speak to Michael Dorn and sit in on/participate in his Q&A. There are also a few guests that are as of yet unannounced - I will be taking pictures.
Posted by T'Laina at 22:57