I happened across a Star Trek Book & Record Set at one of last years comic cons - specifically, "The Crier in Emptiness". These are original stories for children inspired by Star Trek, and are very fun to listen to and read. The pages are beautifully colored, and the sound - especially the Crier in Emptiness's sound - is beautiful and haunting.

On the cover of my copy is a publicity photo from the Motion Picture, although there are other covers out there as well - as it was first published in 1975 and re-released around six times afterwards. This release was published in 1979. On the back cover, to my delight, is a member of one of my favorite species: A Rigellian. To the left right of the Rigellian attendant is a Megarite. Both of these species were briefly shown in the motion Picture. 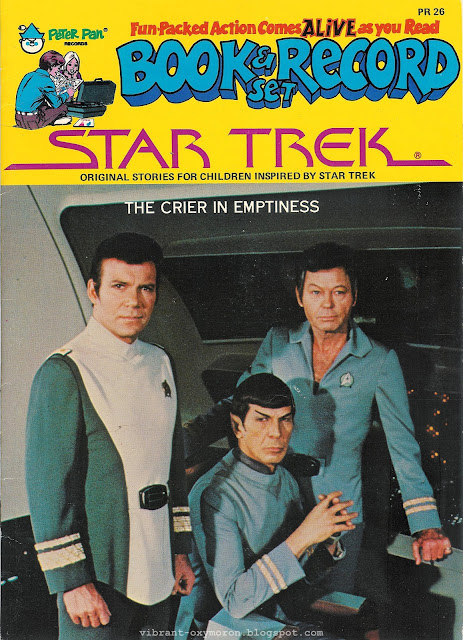 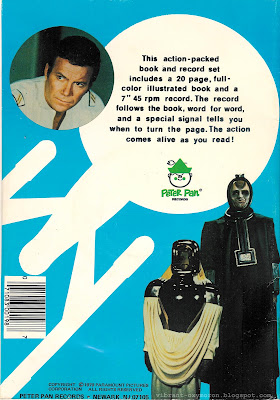 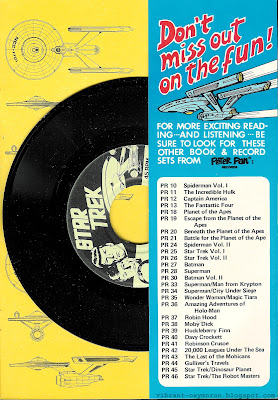 As amazing as I think the story and it's telling is, there are a few strange things that "stand out". First of all, Uhura is white, with blonde hair: 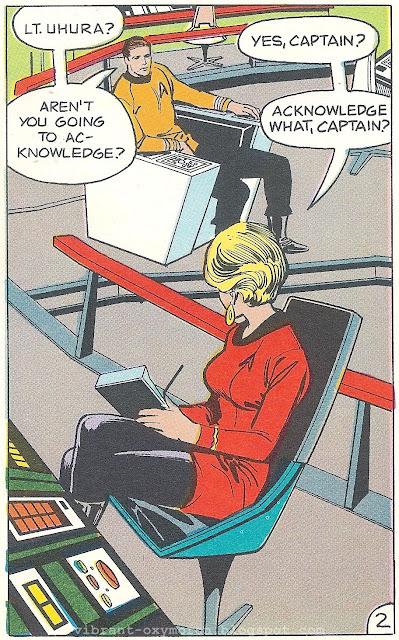 You might think that they are being racist, if it were not for the fact that they made Sulu black: 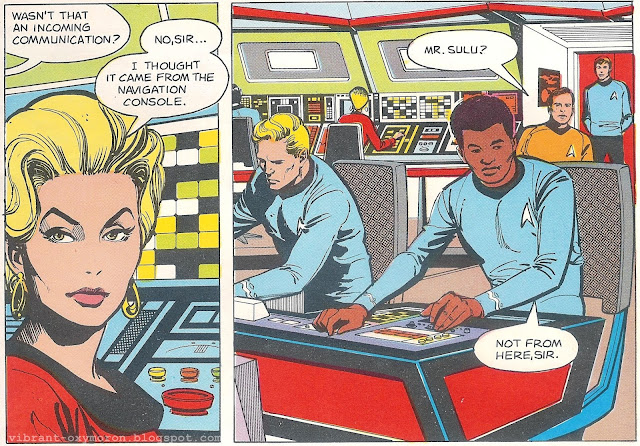 That guy beside Sulu? That is Lieutenant Connors, and he sounds like a cross between Scotty and Chekov. And both Connors and Sulu are wearing science uniforms, for some reason (although now that I think about it, Sulu also wore a science uniform in the pilot episode "Where No Man Has Gone Before").

The plot of the story is quite simple - the crew starts hearing musical notes, and they do not know where it is coming from. They soon discover (or rather, hypothesize) that they have encountered a being of pure sound.  McCoy grasps his head and looks up in muscle-man-mode. 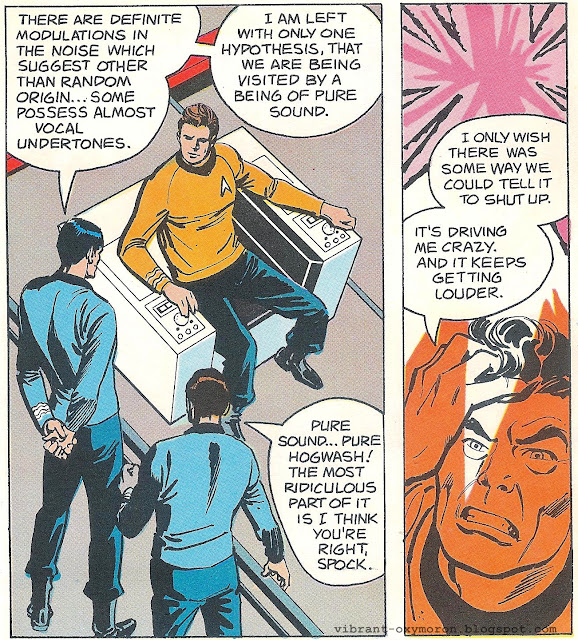 The notes are straining and harming the ears of those on board, so they begin devising a plan to drive the creature out. Zoom in on Spock's dark and moody profile. The situation is dire. 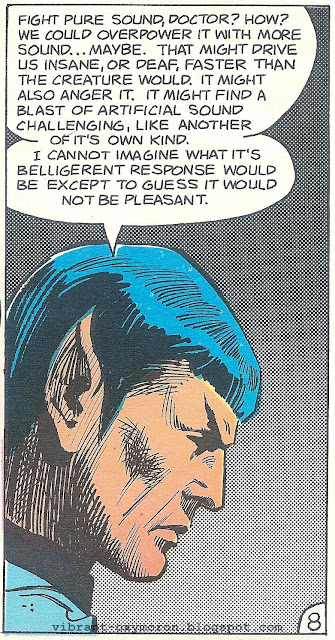 The bridge erupts with sound! 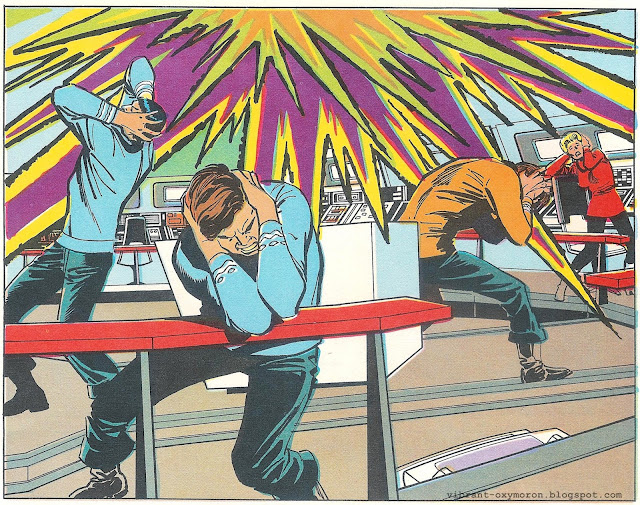 Lieutenant Connors brings out an Edoan Elisiar - a triple keyboard operating an echo chamber, resonating bars made of bone, and "something that rather resembles an earthly xylophone twisted into a mobius strip". He begins to play music in an attempt to communicate with the beings. After less than a minute of playing, he starts complaining about getting tired. Either it takes immense effort to play this instrument, or Connors is the wimpiest person on the Enterprise. 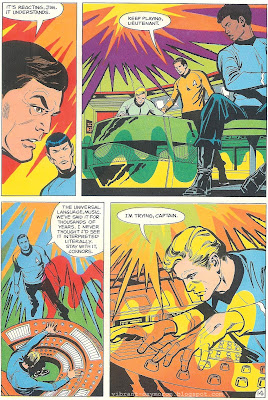 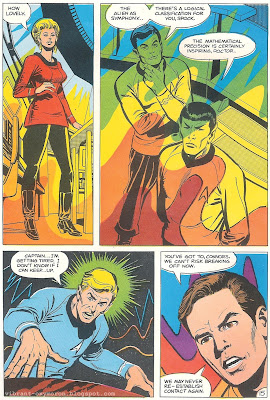 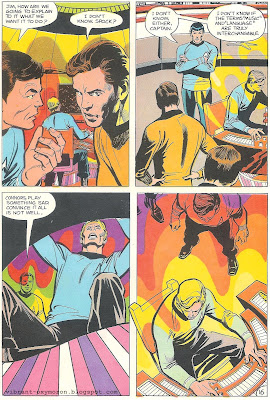 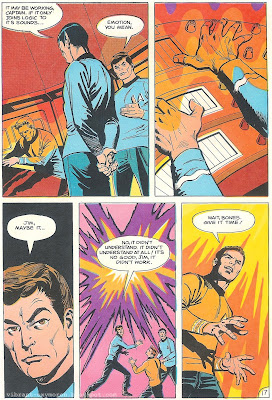 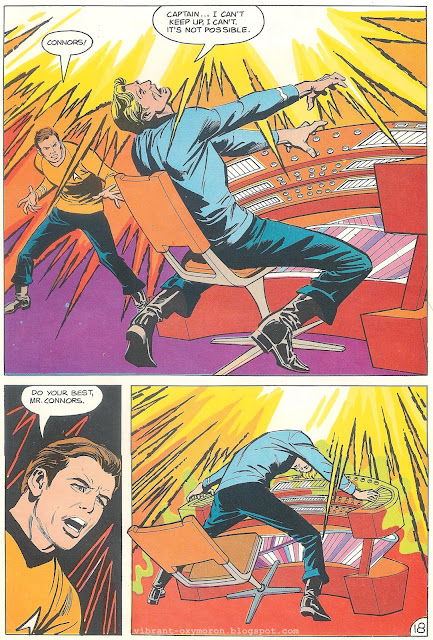 Suddenly, it leaves. Nobody knows where it went, or why it was there, but Kirk thinks it may have just been lonely. "Uhura" says something cryptic, and then goes back to work. (Notice also that her insignia disappears, not that it was ever very visible to begin with.) 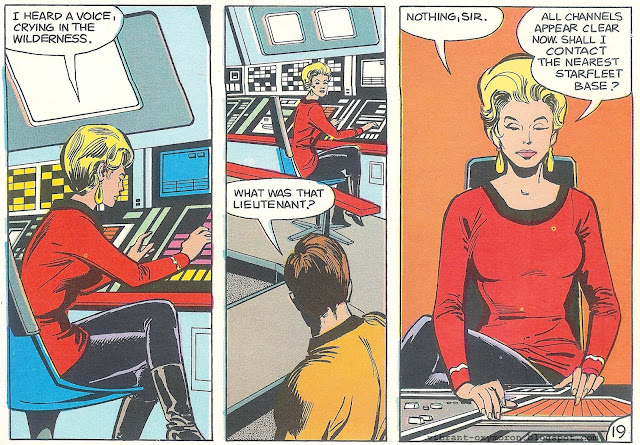 Fun fact: It is theorized that Lieutenant Connors was originally pencilled to be Arex, the Edosian (Edoan in the TAS novelizations) navigator from the Animated Series. This is backed up by the fact that Connor's name in the speech bubbles are always crushed (implying that the name was originally shorter), and that the instrument (which was Edoan) was designed to be played with three hands.

Sometimes in the mornings I play this on my old record player while I drink tea. Luckily for those who do not have access to the record and/or a record player, the story was kindly uploaded to youtube:


PS. You may not have noticed (I hope you did) but they spelled "effort" wrong on the sixth page.
Posted by T'Laina at 19:55