The one (and only) thing that bothers me about the "Marvel Comics Group" Star Trek comics is the front covers - they are massively misleading. That aside, they are also massively amusing. For example, let's just look at the tenth issue from the first volume in 1981 - Spock... the BARBARIAN! 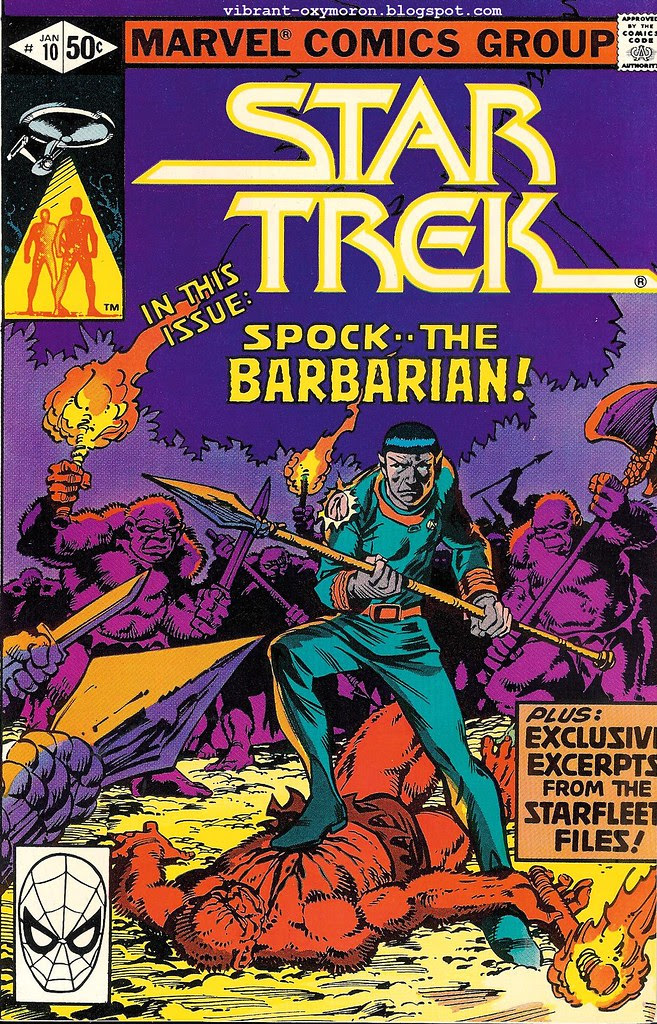 When I got this comic book, I was really curious as to what would happen - what had thrust Spock into battle, and how he had allowed it. I should have known after reading others that the story would have almost nothing to do with the cover art. The story - Domain of the Dragon God! Warning: Ahead be spoilers.

Spock and Doctor McCoy crash on a planet to find that primitive tribesmen are trying to throw a girl into the a pool "churning with hideous reptiles" as a sacrifice to the Dragon God. The girl escapes and runs to Spock. The men run after her, and are stunned with phasers. McCoy takes the girl, leaving Spock to fight them off single-handedly. Unfortunately, his phaser clogs and he is overpowered. The tribesmen think that Spock is a shaman because of his knowledge and technology.

The girl (N'Shulu) brings McCoy to her people because they are good, unlike Ragnok and his people, and will help him save Spock. Meanwhile, Spock is brought to Ragnok and sentenced to hard labor on the mountain with the other slaves. A fight breaks out between Spock and the other slaves when they are introduced to new ways of working - proof that Spock is an evil shaman. 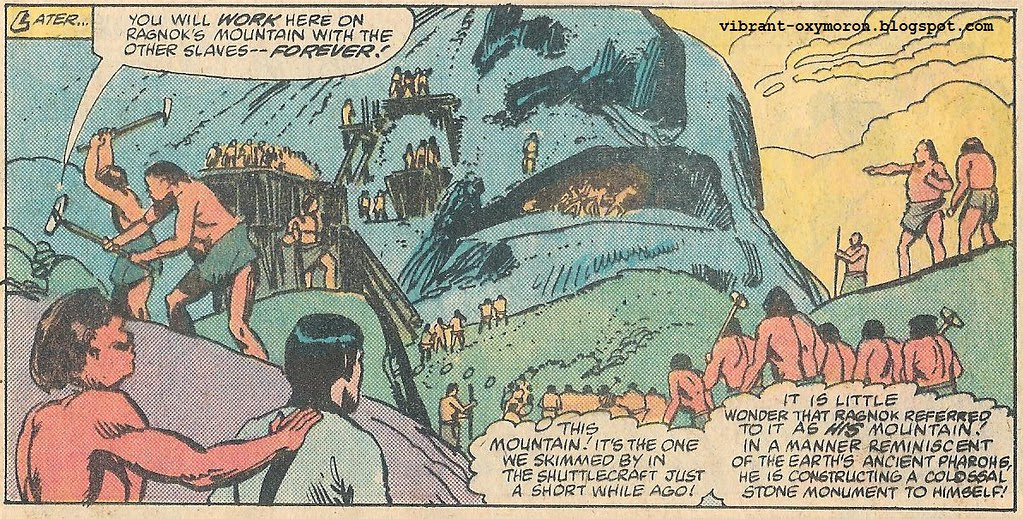 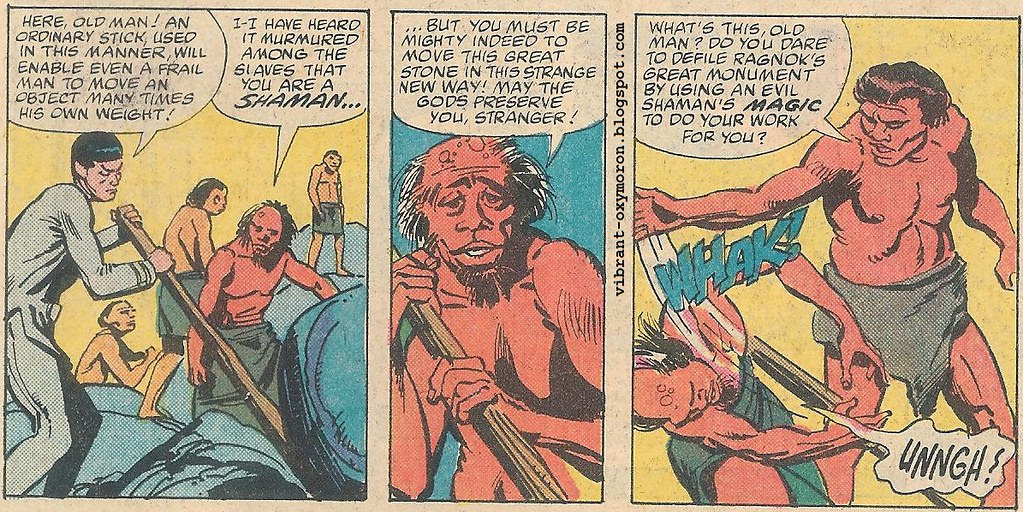 McCoy meets with N'Shulu's brother and his people, and they agree to help. They wish to overthrow Ragnok, but are too weak. After deciding to disobey the Prime Directive, he teaches them of bows and arrows (snakes that fly), and how to use them. Just as Spock prepares himself to escape, McCoy and the armed men attack Ragnok and his guards. Ragnok is killed with a "magic flying stick that can kill from a distance" and K'Barrgh takes over as leader. K'Barrgh, changed by this sudden power, begins to rule as Ragnok had and orders an urgent sacrifice of Ragnok's wife. 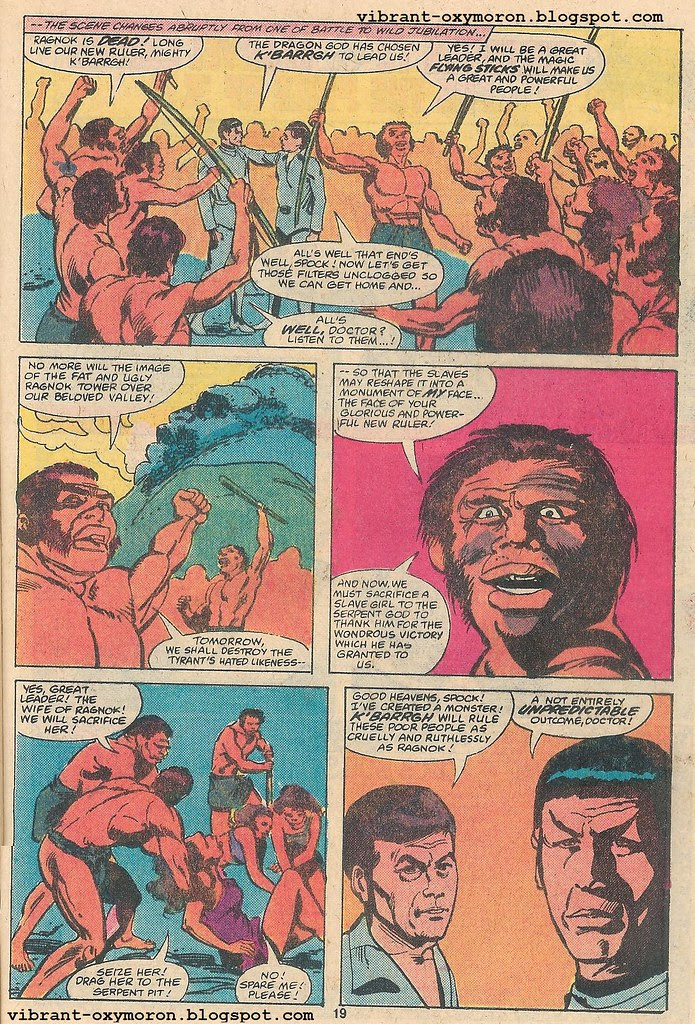 Doctor McCoy attempt to make them realize the mistake they are making, but Spock suggests that "further efforts at socio-religious reform would be most unwise" when the men begin to turn on them for being "evil gods". They feel that their point is proven when the sky darkens - luckily, they are saved by the Captain just before they are killed in the name of The Dragon God.

Nowhere in the story does Spock even remotely become a barbarian, unless you count fist-fighting as barbaric - something that is considered to be so on Vulcan. Perhaps that is it, or perhaps it was just the fact that he was among "barbarian" slaves.
Posted by T'Laina at 19:11