B is for Board Games!

I have always been a fan of board games, even if I did only use them to line up the pieces and make organised designs. After years of peerless, repetitive board game play, I finally found some friends. Some friends who also liked Star Trek. And then I acquired these: 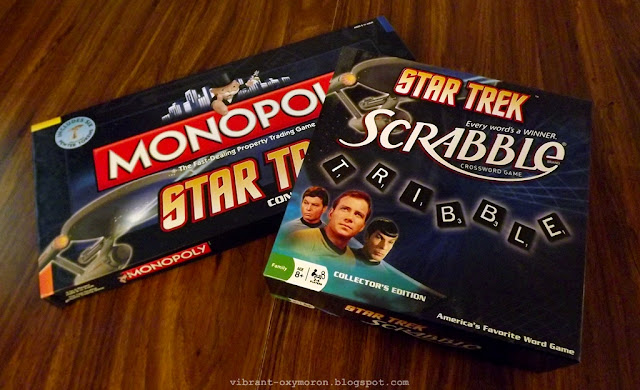 My father has a friend who has a son who is a Star Wars fanatic. For Christmas, his grandmother got him a brand new "Star something-or-other" Scrabble game. It turned out to be a Star Trek scrabble game, obviously. Graciously, however, he allowed me to take possession of the game for free. I picked up the Monopoly game (the Continuum Edition) at this year's Comic and Toy Expo - there was a Klingon Monopoly as well, but I wanted to own Vulcan and stare at the captains' faces while I played.

Behold: I actually play this game with real-life people: 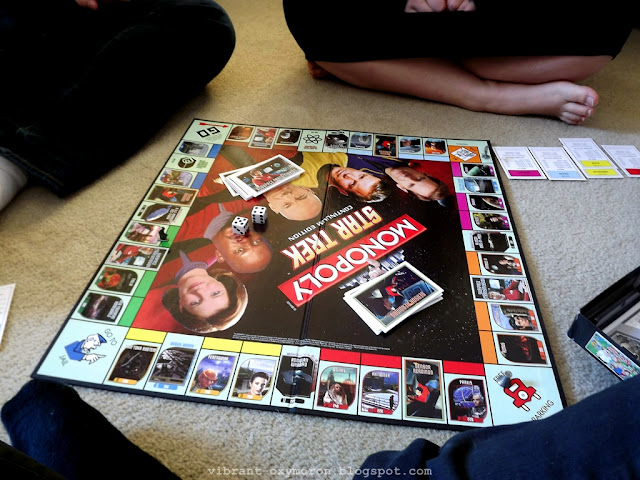 While we were playing, one of my friends rolled the dice and this happened: 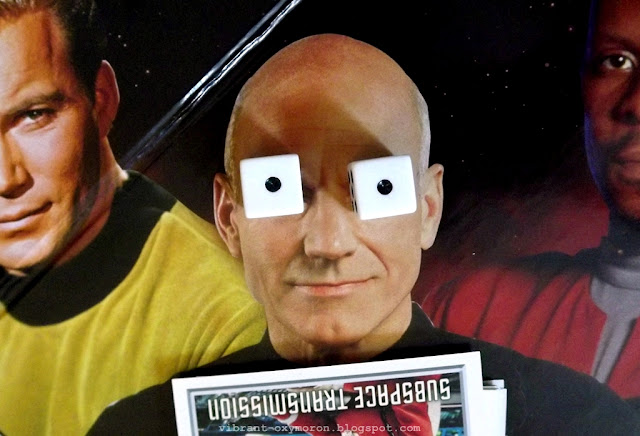 Every main captain is featured on the board (Archer, Kirk, Picard, Sisko, and Janeway) and instead of "Chance" and "Community Chest" cards, there are "Sensor Readings" and "Subspace Transmission" cards. The paper money is labeled as "Gold Pressed Latinum Bars".

I was surprised to find that Vulcan could be bought for only 120, being one of the cheapest planets to buy in the game. The most expensive properties are Starfleet Command and the United Federation of Planets Headquarters.

The important thing is that Sarek is on the board somewhere. 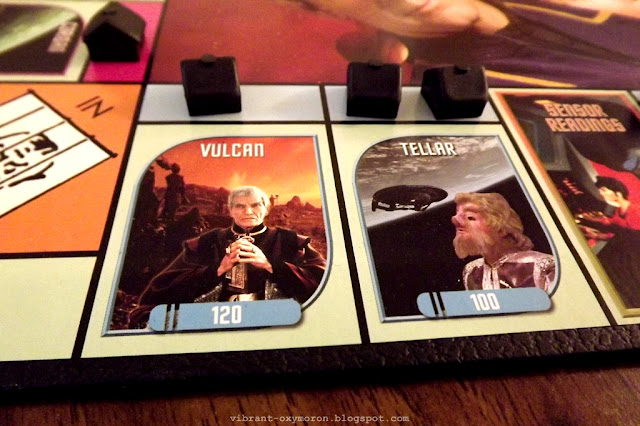 Romulus and Remus are on the board as well, and looking quite sexy: 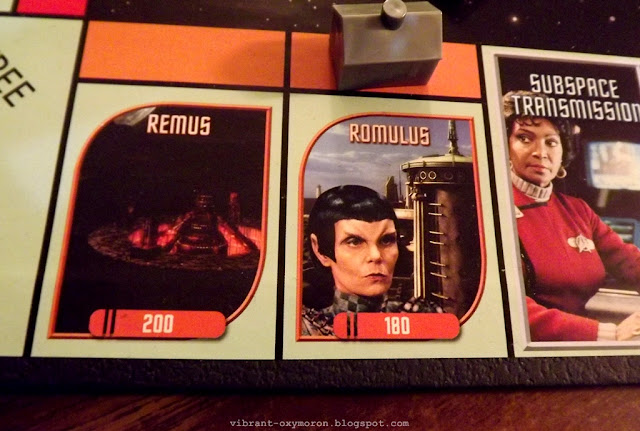 The property cards are actually fascinating, because not only are the photos used absolutely beautiful, but each card has information on the planet or piece of property. 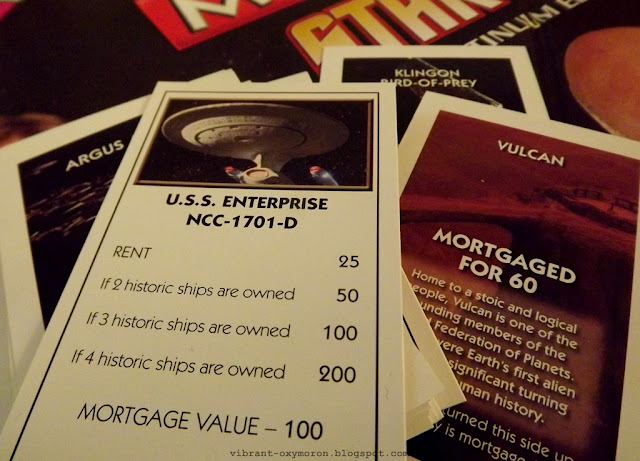 The Subspace Transmission cards are also very interesting to look at - here you can see a borg, the top of Doctor Phlox's head, the Gorn, and Uhura playing Spock's Vulcan lyre (or a ka'athyra/ply'muth).

Some of the messages on these cards include:
"Learn all that is learnable and return that information to the creator - pay 50 for confusing V'ger"
"Take lessons from a holographic doctor on how to be more human - pay 50"
"Fight to free the Drill Thralls from the Providers - collect 100". 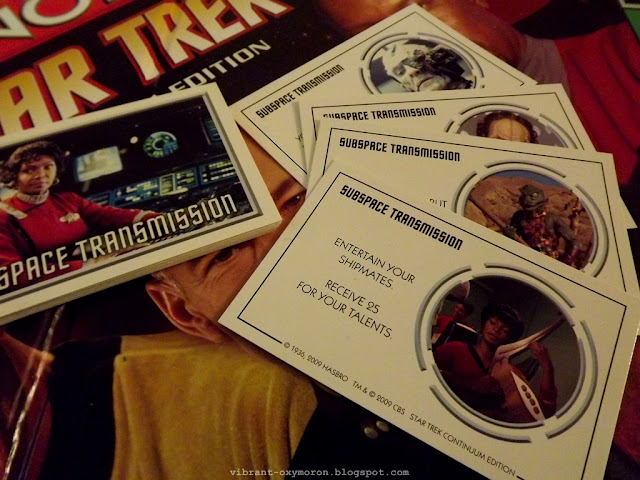 Moving onto the Sensor Readings cards - but not only are they interesting to look at, but they are entertaining to read. For example: 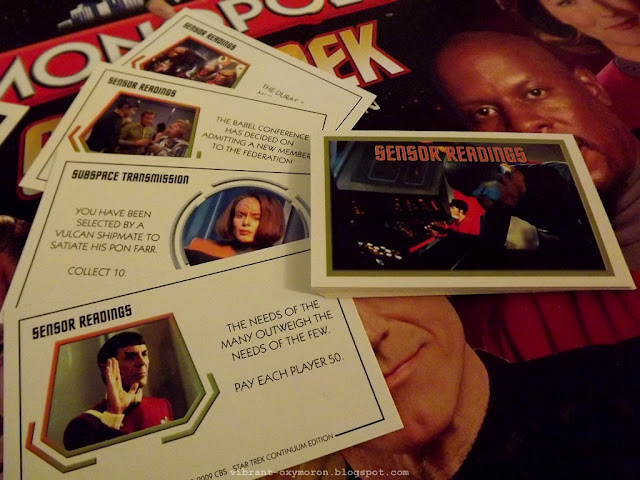 Star Trek Monopoly: Continuum Edition also comes with "6 collectible pewter tokens". I went out onto the balcony to take some detailed photos.

Below, a Klingon blood wine goblet and a phaser. 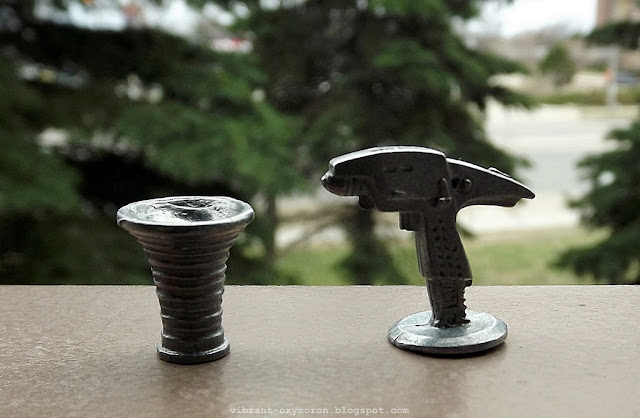 A TOS communicator and a shuttlecraft: 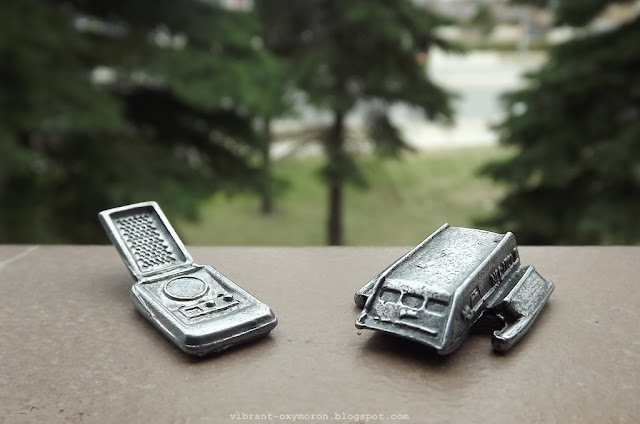 And finally, a Vulcan "harp" and the Captain's chair. Can you guess which piece I take every game? Here's a hint: the ka'athyra. I actually squealed when I saw it for the first time, and then I felt like I would make a terrible Vulcan - I just get so excited. 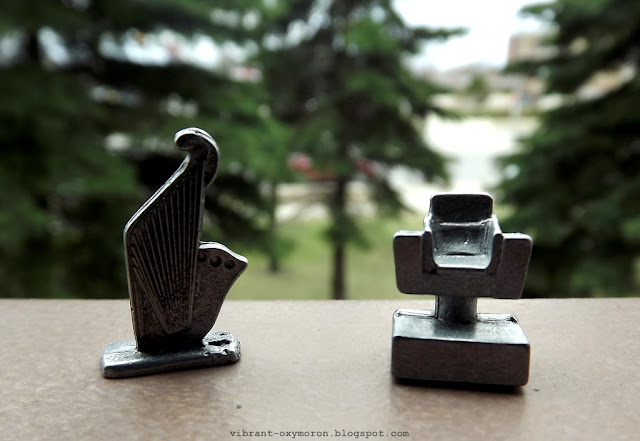 Onto the scrabble game, I couldn't quite get good pictures because of the lighting. I don't know why I always do these things at night. I don't have as much to say about Star Trek scrabble, but I can say that it is equally entertaining. Just look at that beautiful design (notice Mark Lenard in the bottom corner): 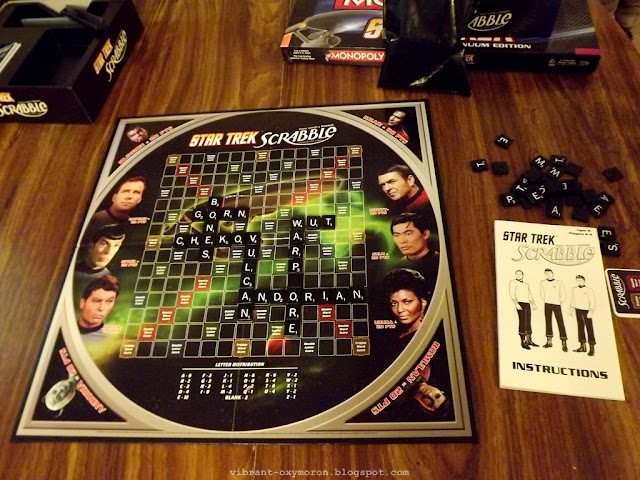 If you look closely, you will see that instead of the word "triple" on the triple word and letter squares, it says "tribble". Funny stuff. When I first saw it, I almost choked on my milk. 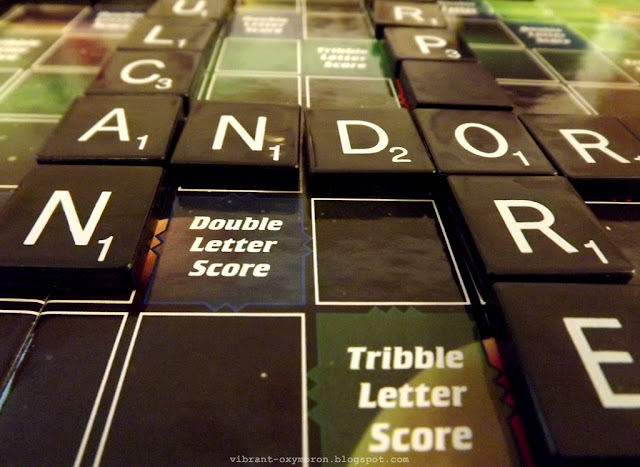 In this game, one may gain extra points by making any of the bonus words, some of which being Babel, Balok, Stonn, TPau, Zeon, Horta, Tribble, Vulcan, Ponfarr, Khan, and Krako. One may also use words in Klingon, Klingonese, or tlhlngan Hol.

Actually, I will just post another picture with the bonus words, because I had it anyways: 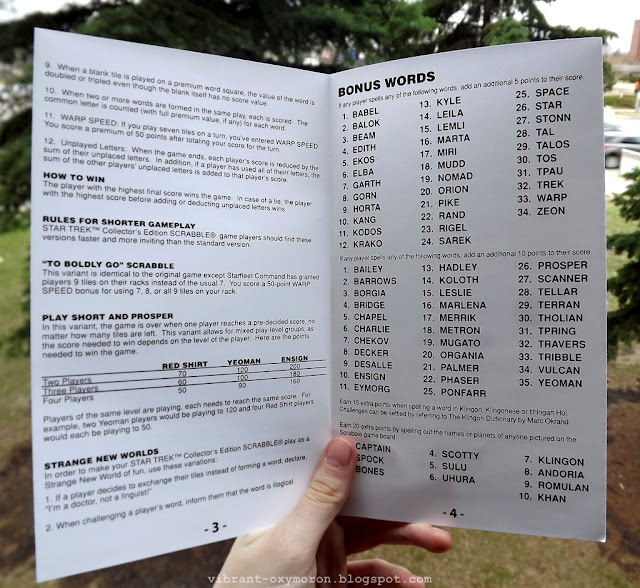 I also have a couple of TNG interactive board games that I got as a gift, but a few of the pieces are missing and I have yet to actually sit down and play it, much less find a person to play it with. I'm sure one of my friends will be willing to sit in front of a VCR for a few hours...